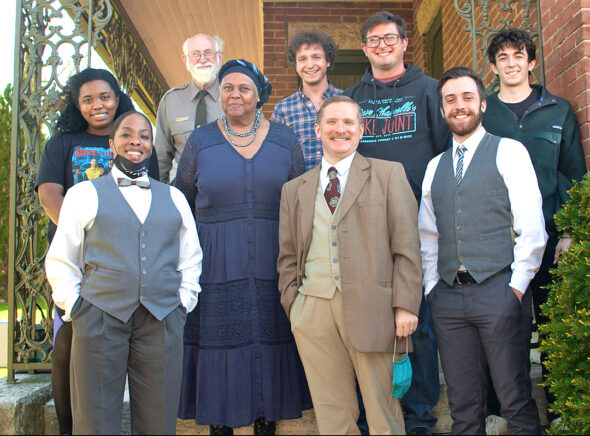 Cast and crew of the short film “Paul Laurence Dunbar: An American Poet,” written and directed by villager Kane Stratton, which debuts at the Dayton Film Festival this week. In front, from left: actors A. Slate, the late MyJoyce Filer, Timothy Cox and Tanner James Brown; in back: Desirée Levingston, park ranger Bob Pederson, editor Zack Richeimer, Stratton and Henry Coffield. They are pictured in front of the Paul Laurence Dunbar House, a National Historic Landmark. (Submitted photo by Kane Stratton)

I know why the caged bird beats his wing
Till its blood is red on the cruel bars;
For he must fly back to his perch and cling
When he fain would be on the bough a-swing;
And a pain still throbs in the old, old scars
And they pulse again with a keener sting— I know why he beats his wing!
—Paul Laurence Dunbar, “Sympathy”

Filmgoers will have an opportunity this week to view a 10-minute historical fiction film about the poet Paul Laurence Dunbar.

“Paul Laurence Dunbar: An American Poet,” produced by the Xenia-based Caesar’s Ford Theatre and directed by the theater’s project manager and playwright, Kane Stratton, will debut at the Dayton Film Festival on Friday, Sept. 23, at the Neon theater between 7 and 9 p.m. Dunbar is portrayed by renowned Dayton poet and actor A. Slate.

Dunbar, who lived 1872–1906 and became one of the most recognized African American poets, was part of a first-generation wave of African Americans born to formerly enslaved parents. His parents, Matilda and Joshua settled in Dayton after the Civil War and raised him there. Although Dunbar died in 1906 from tuberculosis at the age of 33, he was a prolific poet and is well-known for his unabashed use of dialectic verse centered in African American culture.

Stratton lives in Yellow Springs with his wife, Steffanie, their teenage son and a “mini-Aussie” named Hudson. Along with directing, Stratton also wrote the script for the short.

“I was aware of [Dunbar] as a famous American but I didn’t have full appreciation of him as an international figure,” Stratton said in a recent interview with the News.

The choice to cast Slate, who is a woman, to play Dunbar may at first brush appear unconventional. But according to Stratton — who first heard Slate recite Dunbar’s poetry at an event at the Caesar’s Ford Theatre in 2019 — there was nothing unorthodox about his choice.

“A. Slate recites Dunbar’s poetry in a way that’s jarring in a good way — I knew she could do it,” he said.

Rounding out the small cast are local actors Timothy J. Cox, Tanner James Brown and the late actor MyJoyce Filer, who died soon after the film was completed. The film was crewed by D5 Pictures, a production company that Stratton found on Craigslist. Zack Richeimer of D5 served as the director of photography and editor.

Released online in 2021, the film was shot at the Paul Laurence Dunbar House in Dayton. The home, which Dunbar bought for his mother in 1904 and where he composed much of his poetry, is a National Historic Landmark. Filmed over the course of a day, the film depicts a heated dinner conversation between Dunbar and the mayor of Dayton, Charles D. Snyder, portrayed by Cox, in 1903. Also part of the conversation is Dunbar’s mother (Filer) and Snyder’s advisor (Brown).

In the film, Dunbar passionately tries to persuade the mayor that his poem “Sympathy” should be read at a large city-planned Fourth of July event. While the scene is fictionalized, the characters were based on real-life individuals. “Sympathy” is one of Dunbar’s most famous poems, the verses offering the reader a metaphor of a caged bird longing for freedom, symbolic of the struggle against oppression.

Shot with tight close-ups that underscore the tension between Dunbar and the mayor, the film is meant to “question who we are as Americans,” according to Stratton.

“It didn’t take me long. I wrote it during the racial upheaval in 2020,” said Stratton, referring to the national and international protests in the aftermath of the murder of George Floyd at the hands of former police officer Derrick Chauvin.

Rehearsed entirely via Zoom during the early days of the COVID-19 pandemic for three days a week over a 12-week period, Stratton said the process, at times frustrating, “would pucker your butt cheeks as a director.” Because of the heavy dialogue, Stratton also intentionally did not look at his laptop all the time during rehearsals, and instead listened to the actors. According to Stratton, this paid off during filming because the actors had to act from multiple camera angles, particularly when Slate recites Dunbar’s poem.

“We kept it simple, straight to the point and wanted all the energy to go into the poem — the power struggle of Dunbar in this scene — with the mayor of Dayton. He’s a standoffish white dude and skeptical of how the world is going to respond to Dunbar’s activism,” Stratton said.

Stratton has created other historical fiction pieces for both stage and film, including the 2020 eight-minute vignette “Caesar’s Redemption,” about a Black man who is a “maroon,” or a person who escaped enslavement, that lived among the Shawnee people in the late 1770s.

Stratton said Caesar’s Ford Theatre is partnering with members of the Shawnee community to produce a living history tour in which tribal citizens will write, produce and act.

“This is the first-time tribal citizens will be portraying tribal citizens. Not limiting what we do, we have the resources and talents and creatives to discuss a lot of things in history,” he said.

Stratton said the theater is open to producing stories based on historical events that are not widely known, that are “interesting and underserved in history.”

“So many untold stories that can benefit us now — I want to be proactive when it comes to telling these stories,” he said.