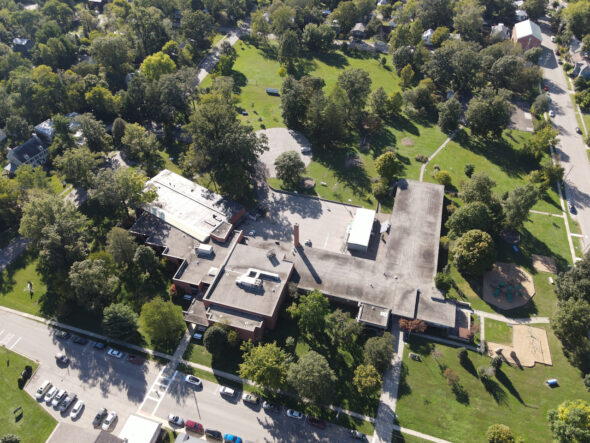 The new protocols follow discussions at past meetings of the board surrounding the safety and security of students, including comments from parents and community members at the board’s July meeting that referenced the deadly May shooting at Robb Elementary School in Uvalde, Texas. Millls Lawn Elementary in late September. (Drone photo by Bryan Cady)

At its regular meeting on Thursday, Aug. 18, the YS Board of Education approved new procedures for visitors and volunteers who enter school buildings.

The new protocols follow discussions at past meetings of the board surrounding the safety and security of students, including comments from parents and community members at the board’s July meeting that referenced the deadly May shooting at Robb Elementary School in Uvalde, Texas.

Superintendent Terri Holden announced that she would be meeting during the second week of school with three potential vendors for a new visitor management software to be employed by the district at all school buildings.

“But whatever one we land on, the process [will be] the same,” she said.

As has been the policy thus far, visitors to a school building, including those volunteering and those picking up students, must enter through the main entrance and sign in at the office. When entering the office, however, all visitors must now also show a photo ID, such as a driver’s license.

After the upcoming visitor management software is installed, photo IDs will be logged and confirmed via the software, which will also print out a visitor’s badge. Visitors and volunteers will then be permitted to enter the school with a staff member or check out a student. Items dropped off for students will be left in the office and delivered to them.

Holden noted that, while the new procedure may take some adjustment, she has received some “pushback” in the past concerning a perceived lack of consistent protocol for those entering the schools. While office employees do ask for photo IDs when they don’t recognize a visitor, she said, the new policy will ensure that everyone entering the building encounters the same process.

She went on to add that, unlike Yellow Springs Schools, most districts that employ similar protocols have secure vestibules in their facilities in which to cloister visitors while photo IDs are scanned and logged.

“But we’ll figure out that challenge,” she said.

Before the new procedure was approved, board member Luisa Bieri Rios expressed concern about access to the school for visitors who don’t have a photo ID.

“I would not want to prevent a parent from being able to pick up their child from school for lack of a photo ID,” she said.

Holden responded that she would check with the prospective software vendors to confirm which other forms of ID are acceptable, but she stated again that some form of photo identification would be required.

“You need to be able to come and get your child, so we need to figure this out,” Holden said. “But we also need to have a policy that’s consistent.”

Holden also clarified that public events taking place at the schools, such as plays, parent-teacher conferences, Exhibition Nights, after-school sporting events, parent meetings after school hours and meetings of other groups outside of school hours will not require the use of the new protocol.

According to the new requirement, volunteers include those acting as chaperones on field trips; helping in a classroom, workroom or library; working at Field Day or Book Fair events; assisting with after-school clubs, practices, rehearsals and school-play-related events like constructing sets; guest instructors who appear without staff present; and outside accompanists for music events.

Holden asked that the board approve her recommendation that the district shoulder the cost of background checks for volunteers.

“We don’t want [people] to be burdened when they volunteer their time to help our children,” she said.

Holden’s recommendation that the district pay for volunteer background checks was approved.

She also suggested establishing a fund to pay for background checks to which community members could donate.

Miami Township Trustee Marilan Moir spoke early in the meeting on continuing communication between the Township, school board and Village Council. She stated that she was approached by school board member Judith Hempfling and Village Council President Brian Housh about being a liaison for communicating with those governing bodies about Township matters in the future.

She added that the three bodies are in the process of planning a joint public meeting, hosted by the Village, to discuss identified public funding needs.

“I hope you all are on board with that,” she said.

The proposed public meeting is being planned partly in response to the trustees’ vote to place a 3.5-mill operations levy for Miami Township Fire-Rescue on the November ballot. After learning of the vote, the school board wrote a letter to the trustees expressing disappointment that plans for the levy were not shared with the school district and Village government, citing a reported agreement between the governmental bodies to do so. The meeting, Hempfling said, will be a chance for all three bodies to connect with one another and with the community.

“Each entity [will take] 15 or 20 minutes to share their plans and their needs and then have a discussion … with villagers about the essential services that we all provide and how to finance them,” Hempfling said.

Board President TJ Turner said he hopes the meeting will also allow each governing body to share what they have planned in terms of upcoming levy requests, so as not to “surprise the public” and to maintain transparency moving forward.

“I just think it would be helpful if we got it all out on the table,” Turner said, citing the schools’ own permanent improvement levy, which will expire in 2023, and two emergency operations levies set to expire in 2025.

The school board, Township and Village are still in the process of finalizing a date and time for the upcoming meeting and discussion, which will be announced in a future issue of the YS News.

The Facilities Committee announced to the board that the first reports from the district’s contracted maintenance plan advisor and architect, who will make recommendations on the facilities’ needs over the next several months, will be presented at its next meeting on Thursday, Sept. 1, at 7 p.m.

The committee was formed in March to explore the costs of a phased, permanent-improvement plan to repair and upgrade the district’s buildings, compared with those associated with new or partial construction. The tandem work of a maintenance plan advisor and an architect was identified as a springboard for the work of the committee at its first meeting.

Motz Engineering, the district’s recently hired maintenance plan advisor, has completed its initial assessment of the conditions of the facilities with regard to renovations, upgrades and maintenance, and will present a preliminary report at the meeting. This initial report will be followed in the future by budget estimates and a life cycle cost analysis for proposed repairs and upgrades and further discussion with the committee before a final report is presented to the school board.

[Ed note: Because time ran short at the Sept. 1 meeting, Motz Engineering did not make this presentation as planned, and will not make a presentation at the Sept. 8 regular school board meeting cited below. Instead, the committee elected to hold the presentation until the next meeting of the Facilities Committee on Thursday, Oct. 6, to give ample time and to allow for a more complete report to be presented.]

Ruetschle Architects, contracted by the district to assess the need for educational enhancements and any new construction for the facilities, will present an initial report on the educational adequacy at all schools and a draft of possible solutions.

The Facilities Committee meeting will be livestreamed for public viewing on the “Yellow Springs School Board Meetings” YouTube page; a recording of the meeting will be hosted on YouTube and at ysschools.org/facilities.

The two firms will give the same presentations to the school board at its next meeting on Thursday, Sept. 8. Because this meeting is expected to run long, it will begin at 6 p.m., and the presentations will be given at the beginning of the meeting.

The community is encouraged to watch the livestream of the presentations on Sept. 1 and share their thoughts with the board by speaking during the “community comments” portion of the Sept. 8 school board meeting or by submitting comments in writing to communications@ysschools.org by Sept. 5.

• Mills Lawn Principal Megan Winston praised the work of MLS Instructional Aide Lauren Mikesell, who recently created the Mills Lawn Extracurricular Program, or MLEP. The new slate of after-school programs is set to run throughout the school year for eight terms of four weeks each and, for its first term, offers opportunities for STEM, language arts, sports, Spanish language and tree identification. The programs are free to MLS students thanks to a grant secured by Mikesell through the YS Community Foundation, and are offered by community volunteers.

“It is obvious that this is a much-needed program for students and for the community,” Winston said. “I thank [Mikesell] for working throughout her summer, when she was off, putting this program together.”

The first term is currently full and is set to begin next week, but more terms will open up for registration as the school year goes on.

• The school district is eligible to receive $72,000 through Ohio’s K–12 School Safety Grant Program. The district applied for the funds last year, but did not receive them after funding ran short for the program; Gov. Mike DeWine announced this week that $43 million of the program’s current $100 million allocation is earmarked for those districts that applied but were denied last year. Holden said that the district will use the funds to pay for cameras and two-way radios to help shore up school security.

• Following new guidance for schools from the Ohio Department of Health, or ODH, with regard to COVID, the district has updated its COVID procedures. The district will no longer follow the “Mask to Stay, Test to Play” quarantine alternative option, which required students directly exposed to COVID to wear a mask for 10 days after their last date of exposure, self-monitor for symptoms and isolate and test if symptoms occur. The option also allowed students exposed to COVID to continue to play sports if they wore masks when able, tested on initial exposure and tested again five days after exposure.

The district will now follow general isolation procedures recommended by the Centers for Disease Control and Prevention, which direct students and staff to stay home and take a rapid test if they feel sick. Those testing positive are directed to stay home for at least five days and until fever-free without medication for 24 hours, and are asked to wear a mask for five days, or after two negative tests 48 hours apart, when returning to school.

The district has requested COVID tests from ODH for distribution to students and families. Mask-wearing is currently optional in Yellow Springs schools, and disposable masks are available for students who choose to wear them.