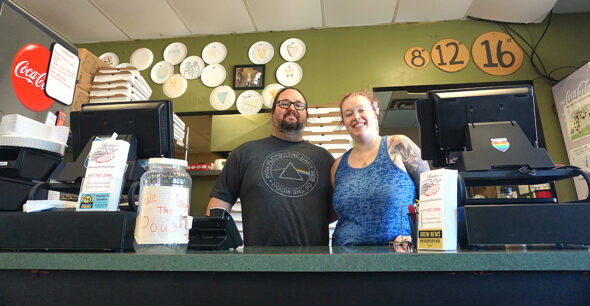 Bentino's Pizza owners Carl and Kim Lea announced last week that they purchased the building in which they've run their restaurant since 2006. Next door, Subway has permanently closed, and now the Leas are looking for a new tenant. (Photo by Lauren "Chuck" Shows)

Changes are afoot at 107 Xenia Ave.

The Subway restaurant at the corner of Xenia and Corry has closed, but Bentino’s, the franchise’s 16-year next-door neighbor, is here for the long haul.

Carl and Kim Lea, owners of Bentino’s Pizza, announced last week that, in tandem with a silent partner, they had bought the building in which they’ve rented space since the business opened in late 2006. (Another Bentino’s Pizza in Jamestown is owned by Jason Garringer.) Around the same time, a sign was posted on the window at Subway — where intermittent closures have been frequent over the last several months — stating that it would not reopen.

Speaking to the News from within their newly owned building this week, the Leas said it has been their intention to purchase the building for years. In fact, Carl Lea added, it was one of the reasons he chose the building to house his new business back when he was searching for a space.

“The original building owner, Terry Quinn, said it might be available to purchase in the future — and it had potential as a blank slate — so I took the spot,” he said.

But when Quinn died several years later and left his properties in trust with TJQ Realty, a Columbus firm, the option to buy the building was off the table for the Leas — for a while. The Leas added that they made an initial offer to buy the building from TJQ six years ago, but were denied.

Carl Lea said the closure of Subway and the sale of the building are related — but perhaps not in the way that seems most obvious.

“We didn’t kick them out of the building,” he said.

The Leas only learned that TJQ had put the building up for sale when they were contacted by someone who was already under contract to purchase it. The buyer told them they were backing out, the Leas said, after learning that the Subway franchise was failing. 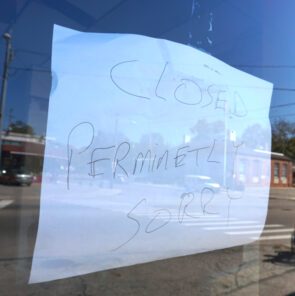 Subway’s closure was made official the day before the Leas closed on the building. In an email forwarded to the Leas from TJQ, representatives of the franchise stated that the business had not recovered from a drop in sales precipitated by the pandemic.

The Leas said Bentino’s, like many restaurants, experienced some hardship during the course of the pandemic; Carl Lea acknowledged that the former Subway’s corner spot is a better, more visible location for a restaurant, but said that Bentino’s has nevertheless always “done really well” in Yellow Springs.

And now that the building is theirs, the Leas’ next step is to choose a tenant for that corner location. The couple said they’ve already had several “promising” potential tenants get in touch, but that nothing is finalized.

“Our ideal is that whatever business goes in there will be successful long-term and maybe complement what we do instead of being a direct competitor,” Carl Lea said. “We’re looking forward to choosing our own neighbors.”

In the meantime, they plan to spice up the exterior of the building to make it more visible to potential patrons; they’ve already spoken with artists about adding murals to the building’s front and the side that faces the bike path.

“We’re solidifying our spot here — to just be able to breathe for a bit and not worry about things like that is a huge relief,” she said. “So we’re flying pretty high right now.”