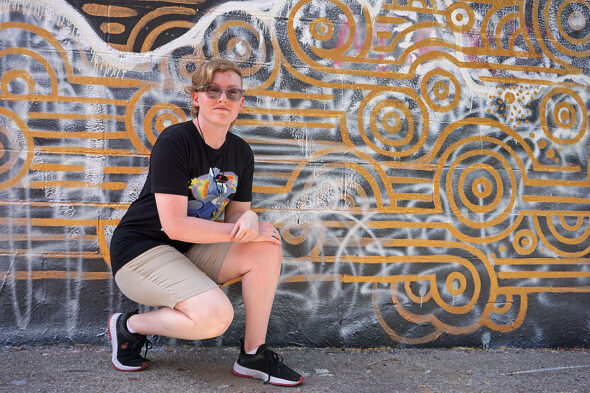 With galleries and arts-centric programming aplenty, Yellow Springs is known not only for drawing in art-lovers, but also artists of all stripes themselves — including Lindsey Williams, a Centerville-based digital artist whose unique work has found a home at the local store Urban Handmade.

In interviews over the last several weeks, Williams told the News that her art, which graces prints, stickers and apparel at the Corry Street establishment, pays tribute to the communities to which she belongs.

Creating and selling her art under the mantle of Golden Mane Illustrations, the 30-year-old artist’s work is “mostly inspired by the furry community and … geared toward empowering the disability, LGBTQIA+, mental health and other marginalized communities … but with a unique furry twist,” she said.

For the uninitiated, the interest of the furry community lies in anthropomorphic animals — drawing them, writing about them, dressing and acting as them — and importantly, Williams said, coming together to bond over their shared interests.

“[I love] the community in general — getting to dress up as a cute animal and role-playing with other [furries], getting to talk and look at other artists’ art and supporting each other,” she said.

Drawn to creating visual art from a young age, Williams’ interests in the art and furry worlds intersected when she transitioned from “crayons, paint brushes, pencils, pens, etc.” to working with digital media. As with many modern subcultures whose interests are esoteric, furries tend to find one another online. By “skimming through the web,” Williams said she encountered a whole new world of inspiration in the work of furry artists.

“I was hooked on trying to find my own art style — till I found one that clicked,” she said.

Williams’ pieces are often whimsical and pop with bright colors, with lines reminiscent of classic animated films. Some works are emblazoned with positive messages, like “I’m unbreakable!” and “Be fearless like the lion!”

It’s the lion, Williams said, that is the inspiration for Golden Mane Illustrations’ moniker.

“I love lions and what they represent in leadership and empowerment,” she said.

Lions also form the inspiration for Williams’ “fursona,” or personalized animal character. Fursonas are avatars created by furries as mascots, roleplaying characters or even alternate personas, depending on the person, and are common in the community. Williams’ fursona is a lion-puma mix which, like her, is named Lindsey,

Another of Williams’ fursonas, a dragon wolf named Lizzie, is represented by a partial fursuit, a custom-made animal costume that she might wear to furry community gatherings and conventions. She doesn’t yet have a fursuit for her Lindsey fursona, but said she hopes to learn enough sewing techniques to one day create the fursuit herself.

Fursuits, too, are common in the community. They are also, Williams acknowledged, sometimes misunderstood by those outside the community. Though public perception of furries has gradually become more even-tempered over the last decade or so, initial media reports in the early 2000s were skeptical and polemic, often portraying the community as sex-obsessed or in some way deviant — a classification that Williams said does not represent the vast majority of furries.

“Some people assume that the furry community attracts pedophiles … [or that] we actually see ourselves as animals,” she said. “Most just want to embrace their inner child and have fun just being themselves. Most just go about their day as anybody else would. A lot of furry artists love drawing animals in their own art style and sharing that with the world.”

In fact, Williams said, the furry community is open and accepting of many of the marginalized communities she works to represent in her art — particularly those like her, who are neurodivergent and LGBTQ+. According to five studies conducted by varying institutions from 2007 to 2019, around 15% of furries reported being autistic, compared to about 2% of the general population; and anywhere from 20% to 40% of furries identified themselves as being LGBTQ+, compared to about 8% of the general population.

Williams pointed to a shirt she was wearing, bearing a furry character named Spectrum, of a bionic “protogen” species. The rainbow-colored character is accompanied by an infinity symbol — the icon of autism acceptance — and the words “Shoot for Acceptance.”

Acceptance, Williams said, is what brought her to Yellow Springs as a place to showcase her work. She was introduced to the village through Katia Clod-Svensson, a local resident and career advancement consultant certified by the Ohio Department of Developmental Disabilities who has served as her job coach.

Via email this week, Clod-Svensson cited the village’s “welcome atmosphere” and “vibrant arts scene” as being a “perfect fit for [Williams’] creative independence.”

“I knew right away after talking to [Williams] for the first time that she would thrive here,” Clod-Svensson wrote.

Through Clod-Svensson’s guidance, Williams said she met with representatives from the YS Arts Council, the Chamber of Commerce and local businesses, including Mark Heise of Yellow Springer Tees and DJ and Connie Galvin from Urban Handmade.

“They have all graciously given me great advice to help me grow my business,” Williams said — and in Urban Handmade’s case, a physical location to host some of her wares, previously only available online or at convention booths.

Williams’ growth as an artist and a small business operator has also been bolstered by Opportunities for Ohioans with Disabilities which helped fund her associate degree in graphic design from Wright State University. Williams was also granted a rare honor by the Ohio Department of Developmental Disabilities,: She was one of only four recipients of a waiver that financially supported the launch of her business.

With so much support behind her, Williams said she hopes one day to expand her creative work even further — perhaps in the realm of children’s literature.

“I’d like to illustrate a book to help children learn about people with disabilities,” she said.

For now, though, she said she’s focused on growing Golden Mane Illustrations enough that it becomes not just a passion, but a full-time vocation.

“I’m hoping that eventually, I’m able to have a stable income,” she said. “I love making art, and I don’t want it to be just a hobby.”

Williams’ work is available at Urban Handmade, and the artist will also have a booth at Fall Street Fair on Saturday, Oct. 8. To see more of Williams’ art, visit bit.ly/3SfoTWT.

*The print version of this article incorrectly reported the organization that provided funding for Williams’ degree; that error has been corrected in the online version.