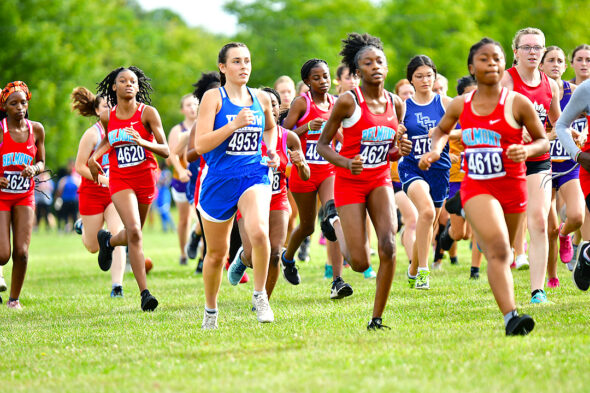 The YSHS team competed at the Centerville Saturday Night Lights — the largest high school cross-country meet in Ohio. Cheyan Sundell-Turner ran to a third-place finish in a field of 246 competitors. She was supported by teammates Sasi Dress-Johnson (91st), Josie DeWine (97th) and Rebecca DeWine (200th), who achieved some of their best times of the year.

On the boys’ side, ninth-grader Kyle Johnston continued to impress as he navigated and fought through a crowded field of 315 runners, finishing in 146th place with a time of 20:10. Jack Horvath (159th) and Isaac Lewis (216) elbowed and bumped their way to great times. The depth of the boys team was on display with Kyle Raymer, Arthur Devore, Evan Galarza and Collin Calfee running great times as the Bulldogs finished in 28th place out of 38 teams.

The McKinney squads traveled to the Clark County Fairgrounds and ran at the Jim Murray Invitational. On the girls’ side, seventh-graders Violet Matteson (65th) and Sierra Sundell-Turner (75th) performed admirably in a crowded field of 192 runners. Fellow seventh-grader Bella Thomas ran a season-best time of 26:48.

The McKinney boys finished in a highly respectable 13th place out of 26 teams, which consisted of many Division I squads. Seventh-grader Alex Lewis ran a time of 13:50 (102nd) and was followed closely by Matteo Chaiten (135th). Alex Main ran under 15 minutes, while Cooper Folck, Oshri Paschal, Maddox Buster, Graham Turnmire, Charlie Carr, Orion Sage Frabotta and Jaden Douglass made significant contributions to the total team effort.

Coach Isabelle Dierauer commented that the team is peaking at the right time as the runners ready for defining season ending meets.

The Bulldogs will compete at Legacy Christian Academy on the campus of Athletes in Action on Saturday, Oct. 8, in Xenia.
—Coach John Gudgel

The Bulldogs racked up both a win and a loss in their matches against Dayton Christian and Xenia at home on Thursday, Sept. 29, and Monday, Oct. 3, respectively.

The 3–0 victory against Dayton Christian saw sophomore Lacy Longshaw again dominate for kills, leading her team with 21; also racking up kills was sophomore Adeline Zinger with 11, senior Vivian Bryan and junior Ella Laws with two each and freshman Malayna Buster with one. Junior Violet Babb was the leader for digs, with 19, followed by 15 from Adeline Zinger, six each from Longshaw and Bryan, four from senior Josephine Zinger and two from Laws.

The losing match against Xenia was a close one at 2–3, with the Bulldogs winning the second and third sets. Longshaw led for kills with 18, while Babb picked up 27 digs.

Results of the Bulldogs’ Tuesday, Oct. 4, match were not available at press time and will be reported in next week’s News.

The team’s current conference record is 5–1, with the total season record standing at 12–5.

The Bulldogs picked up two dominating 8–0 victories against Trotwood Madison and Miami Valley School at home on Monday, Sept. 26, and Thursday, Sept. 29.

Buster and Herzog were the score leaders against Miami Valley School with two goals each; the remaining four were scored by Cowen, Junior Nevaeh Smith, Sorenson and Sparks. Smith and Kibblewhite shared goalkeeping duties, with Smith blocking two and Kibblewhite one.

Another 7–0 win against Xenia saw Eyrich in the lead with three goals, senior Josh Clark following with two and one each from Mapes and senior Ben Espinosa. Senior goalkeeper Krishan Miller saved four goals, keeping Xenia’s score at zero.

Yet another scoreless defeat came for Greenon, whom the Bulldogs bested 5–0. Mapes scored two, followed by one each from Clark, Grushon and Smith-Heston, with two saves from Miller.