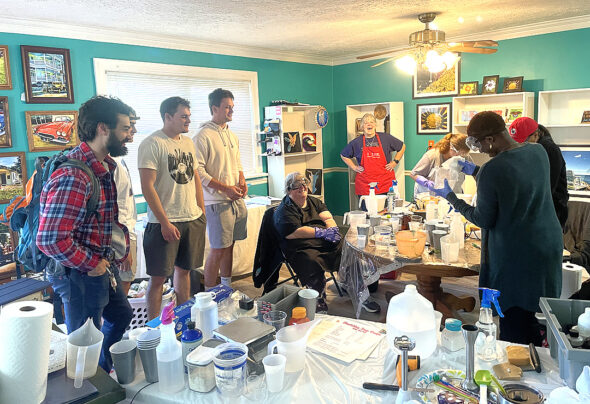 ‘What if community spaces functioned like ecosystems?’ was a question posed in a November 2021 News article about plans for the future Clifton Crafthouse Co-op.

Now, just one year later, the Crafthouse will have the opportunity to “support its effort to create an ecosystem of community spaces designed to support a wide variety of small businesses and meet community needs” — with a recently awarded one-year $357,534 U.S. Department of Agriculture Rural Business Development Grant.

The co-op — located three miles down the road from Yellow Springs in Clifton — is a $2-million project that, when completed, will feature a taproom that will offer beverages from local brewers, community and performance spaces, a commercial kitchen and affordable housing.

According to Managing Director, Board President and Founder Piper Fernwey, the Clifton Crafthouse cooperative model is one way to meet community needs — by creating the spaces that allow communities to thrive.

“What that means is we are a project that’s trying to localize our regional food system, make our communities more sustainable, increase affordable housing, and provide economic opportunity — specifically for the small businesses that we have here, that are struggling in this community — a lot of artists, artisans, crafters, and food entrepreneurs,” Fernwey said.

Combined with a 27% local match from members and supporters, including some in-kind support, the project has received nearly “half a million-dollars of investment,” Fernwey said in a recent interview with the News.

The Clifton Crafthouse Co-op is a project supported by Co-op Dayton, a nonprofit organization whose mission, according to its website is “to develop cooperative businesses that meet community needs.”

Dayton Co-op Co-executive Director Lela Klein is also a Crafthouse board member. Klein, who grew up in Yellow Springs, expressed appreciation for how much the co-op has achieved in such a short amount of time.

“[F]rom incorporating and opening memberships so quickly, to now having a concept space open, and being awarded a significant grant after only one year. This is a huge win for Clifton and surrounding communities, for small business owners and entrepreneurs, and for the cooperative movement,” Klein said in a recent Crafthouse press release.

Clifton Crafthouse also built relationships with other community organizations over the past year, including the Greene County Community Foundation. “We have a 501(c)(3) arm, so Lela [Klein] will be starting our Friends of Clifton Crafthouse committee capital campaign. It’s much easier to raise money now,” Fernwey said. 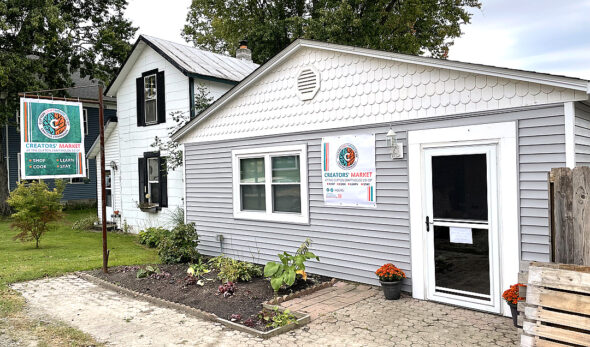 The organization just celebrated its one-year anniversary. According to Fernwey, the cooperative is now “60 members strong” and growing. A “one-time lifetime” membership fee is $250, which can be paid a variety of ways, including “payment plans and sweat equity.” Since its launch, the Crafthouse has also completed a beer garden and finished a plat map for future affordable housing.

Notably, a concept space called the “Creator’s Market at the Clifton Crafthouse Co-op” officially opened in a smaller building on the property last month, and features a gallery, craft market and space for classes and workshops. To complete the space, the Crafthouse received grants in the amount of $30,000 from ALOFT Dayton, and a $10,000 mini-grant from Hall Hunger Initiative for a shared commercial kitchen that will open later this fall.

According to Fernwey, the Creator’s Market opened in part so that artists and creatives “can start doing the sales of crafts and workshops.” It is available to artists, artisans, crafters, food vendors and anyone who does any teaching. For now, the Creator’s Market will open with limited hours — “when people are already here for pancakes at the Mill, shows at the Opera House, hiking at the gorge,” Fernwey said. However, the Co-op eventually wants to create opportunities for the Market with planned events and programming in the space.

“I freaking love that for our anniversary shindig we had a beautiful stage, and we had poetry, belly dancers [a special stage with dancers in mind was constructed] and music,” Fernwey said.

Although the physical space of the Creator’s Market will eventually fill in with art, members can also sell their wares on the Co-op’s website. Artists can sell a diverse range of work. “Our only limitation is that it can’t be offensive — nonoffensive or hateful things,” co-op board member and gallery organizer Deja Freeman said.

“If you have something that you made to sell or to teach, we have space for you,” Fernwey said.
Separate rooms designated for Airbnb rentals will also be available in the same building as the Creator’s Market, which according to Fernwey, was originally going to be a separate undertaking.

“I’ve been working for the co-op for free as a founder, putting financial resources into the project — that’s why we have architectural drawings and things like that,” she said.

The modest rental income will help Fernwey keep afloat financially as the project evolves. “I always had the option when I finished this space — for it to be an Airbnb just for me so I could make ends meet — so I identified an opportunity to bring those two together in a way that was mutually beneficial,” she said.

Originally Fernwey thought her role with the project would be a temporary one, that she’d eventually step aside as things evolved. “I truly thought this project would get to a certain point, and someone would go, ‘thanks sweetie, we got it from here,’ and I would be grateful, and pass it off, and let the people who had this dream longer than me steer the ship. I’m just a community organizer — I’d put the pieces together and turn it from a dream into reality,” she said.

But as often happens, things didn’t go as planned. Many individuals, and organizations alike, expressed a desire to support the co-op — after it was completed.

“What we got was a lot of people saying, ‘this is so great, we’ll be there all the time when it opens,’ not understanding that as we grapple with issues of aggregation of wealth and properties and needing community ownership and control over opportunities, spaces, all these things — the cooperative model is the answer — and what that means is, I don’t have an investor to do that you need to get involved now …” Fernwey said.

To get people involved in earlier stages of development, the Crafthouse board decided to open the Creator’s Market, so that locals could feel more comfortable in supporting a tangible finished concept. “We were getting that answer so many times that it was, ‘OK, how can we start doing this now and give those people a way to come to the table?’” she said.

According to Fernwey, the physical space at the Creator’s Market came to fruition through the collaborative efforts of a core group of six or seven members with around 15 key folks floating in and out for major renovation efforts, ensuring that the decision to open the concept space — approved by the Crafthouse board in June — was rewarded with a relatively quick completion.

“One of the board members helped install flooring, and we set the [completion] deadline pretty early — we wanted it to be open by the Clifton Arts and Music Festival [in August],” Fernwey said.

Neff, a soap maker for 25-years, is also a certified soap making teacher and has experience running Clifton’s winter market. She recently taught the first class at the Creator’s Market — a full day soap making workshop.

“I’ve taught [soap making] classes in every building in Clifton that will let me — I’ve taught them at the opera house, in the senior citizens center, in the gingerbread house and church and it kind of dries up — I am so excited about the co-op because of the community space,” Neff said.

Freeman, who is also the gallery coordinator for the Yellow Springs Arts Council helped with space layout for creatives to showcase their wares. She will also manage events and exhibitions for the Crafthouse, and said she is excited about the opportunity to build community among other creatives.

Co-op member Karl Yost is a photographer and self-described “semi-retired IT person,” who assists with managing information technology systems.

“Obviously with events there will be a need for photographs, and capturing things is my desire — so it’s a nice fit with the co-op needs I think,” Yost said.

To find out more about the Clifton Crafthouse Co-op, visit cliftoncrafthouse.coop.

Cheryl Durgans is a former board member of the Clifton Crafthouse Co-op.