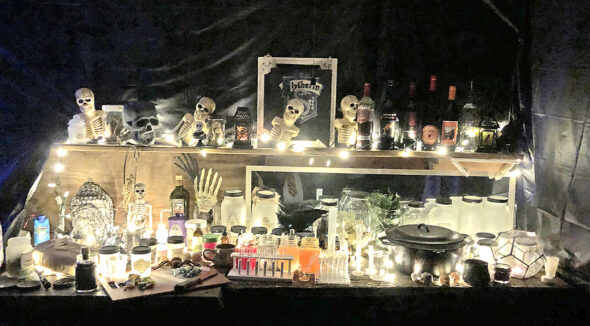 After a two-year hiatus, Jean-Michel Lamoine will again host a “Harry Potter”-themed, immersive Halloween spectacle for trick-or-treaters during the annual Beggars Night on Monday, Oct. 31. Pictured is the potions classroom of Severus Snape — one of several vignettes included in past offerings. (Submitted photo by Jean-Michel Lamoine)

On Halloween nights in recent years, Yellow Springs resident and Wright State University French professor Jean-Michel Lamoine has made it his mission to bring a taste of magic to the holiday’s festivities, delighting local trick-or-treaters with an immersive experience that evoked the world of the “Harry Potter” books and film series.

In 2020, the pandemic brought the magic to a temporary halt — but this Halloween, after a two-year hiatus, Lamoine will again turn the garage of his East Davis Street home into an immersive experience for burgeoning young witches and wizards, offering detailed decorations, interactive displays and treats aplenty.

Lamoine’s love of Harry Potter began when he was teaching in Oklahoma. During this time, a student recommended that he read the series. When he picked up the first book, he said he was immediately enthralled.

“After I was halfway done with the first one, I knew I was going to continue [reading the series]. So, I got to the second one, and I was like everybody else, waiting for the third one, waiting for the next one,” Lamoine said.

After Lamoine moved to Yellow Springs in 2015 and handed out candy for two years, he started noticing something a bit different about his Halloween experience: Fewer and fewer people were at his doorstep. He talked with his neighbor, and they both came to a consensus.

“We [were] kind of miffed because we didn’t have as many people as we used to,” Lamoine said. “We looked at each other and said, ‘We have to do something.’”

And Lamoine did do something: He started the “Harry Potter” project in 2018 as a way to do something fun and creative while the seasons change — and to mitigate the feelings that often come with that change.

“I was, I don’t know, depressed a little bit,” he said. “You know, the weather changes. It’s a little bit sad.”

This year, Lamoine’s transformed home will again feature the same kinds of Hogwarts-inspired flourishes that it has in years past: moving portraits, a divination section with an authentic tarot card reader, a performer portraying Hogwarts ghost Moaning Myrtle, a reconstruction of Diagon Alley, a library and post office, cotton candy colored for each Hogwarts house, butterbeer and typical Halloween candy.

Lamoine said “Harry Potter” is more than just wizards, witches and wands for him — the bounds of Hogwarts permeate through the pages and into his life.

“It’s magical, it’s full of danger, honestly. The story is really appealing, it’s really like a traditional structure: This young kid that knows nothing then becomes a hero,” Lamoine said. “I just loved this.”

But he said his dedication to the fantastical world doesn’t mean he’s ignored controversial statements made by “Harry Potter” series author J.K. Rowling in recent years. Rowling famously made a series of posts on social media site Twitter in 2020 that included transphobic comments, and the author has since doubled down on those statements. Lamoine said this left him feeling disheartened and motivated him to re-evaluate the author.

“How can you detach the creation from the creator?” he said. “It’s bothering me a lot. So, on one side, you have beautiful memories you have from the books and now from the movies, and now you have this kind of stuff happening. This is really becoming a problem for me.”

Lamoine has channeled his disappointment with Rowling into his own hands: He makes wands, decorations and props by hand with neighbors, friends and family members, bypassing the contribution of funds to the author that would result from purchasing themed merchandise.

In 2019, Lamoine received letters from parents in the community who thanked him, saying that the event and setup made their children happy. With the cancellation of the community trick-or-treating event in 2020, Lamoine was unable to enchant the neighborhood. Then in 2021, Lamoine decided to only hand out candy due to continuing pandemic concerns; this year, he will have both indoor and outdoor events as a precautionary measure.

When Lamoine did not set up the decorations in 2021, he estimated that 250 people asked him where the “Harry Potter House” was — clearly, his work was bringing joy to the community. And as happy as the house has made children, Lamoine said they’re not the only ones who’ve experienced joy from being immersed in the wizarding world.

“Actually, it’s the young adults that are the happiest,” Lamoine said. “They’re so happy to be back in that world again, so that really means a lot.”

The enjoyment of the event and the experience it brings for the community does not come without stress. Lamoine starts preparing for Halloween at the end of August.

“We have to rethink every time and, you know, we change everything based on our experience,” Lamoine said.

He described the process as an investment of both time and money. Despite the worry, energy and time that are required to organize an authentic “Harry Potter” experience, it is worth it to Lamoine.

“You create something, it’s fun to create. I think life is not interesting if you don’t create something,” Lamoine said. “If you’re not doing something that’s using your imagination and your creative sense at all, for me that would be a waste of time.”

And this year, the stakes are a little higher for Lamoine — he also has a promise to keep with some loved ones.

“My niece and my mom from France are coming,” Lamoine said. “Halloween is not super celebrated in France, and [my niece] loves Harry Potter because of me.”

*The writer is a freelance reporter for the News, an English major at Wright State University and the newsroom managing editor for the university’s news publication, The Guardian. She is interested in rhetoric, English literature and all things sports and music. She can be contacted at lewis.594@wright.edu.