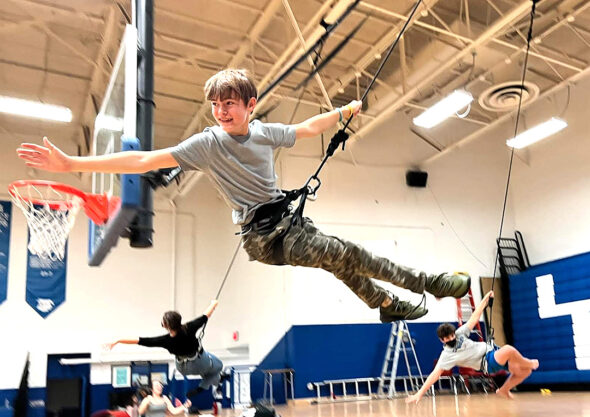 Kaiden McFarlane, center, Katie Quigley, left, and Carson Funderburg — as Peter, Wendy and John — didn’t need the aid of fairy dust as they whizzed through the air in a recent rehearsal for the upcoming McKinney Middle School and Yellow Springs High School production of “Peter Pan and Wendy.” Performances will be Nov.17–20 in the high school gym. (Submitted photo by Lorrie Sparrow-Knapp)

For Wendy, John and Michael Darling, getting to Neverland means flying through the London skies, through the stars and out of this world. For Yellow Springers, the journey will be much more direct: Just head down to Yellow Springs High School.

Lorrie Sparrow-Knapp, performing arts teacher and the play’s director, said this year’s fall production is “big, big, big.” Not only does it feature a cast and crew of more than 30 predominantly seventh- through 10th-graders, the young thespians will have an unusually large stage. While audiences will be seated in select portions of the gym’s bleachers, the denizens of London and Neverland will move from the stage to the basketball court and back as they crow, fight and — yes — fly.

“We’re kind of thinking of it as a circus arena,” Sparrow-Knapp said.

The circus comparison is particularly apt when it comes to aerial choreographer and village resident Maya Trujillo, who created, taught and oversees the show’s flying and aerial dance scenes. Trujillo said she grew up in a circus in Mexico and spent years as an aerial dancer and a youth ensemble director with Aerial Dance Chicago. She had plans to return to the circus in 2020, but those plans were halted by the pandemic.

“This has been nice, because I’m getting to work with kids again, which I love, and doing aerial again,” Trujillo said.

The production involves work with both ropes and harnesses and aerial fabrics hung from metal beams in the ceiling of the gym. Trujillo said the students have had several weeks of practice and have taken to the air with an ease usually reserved for those employing fairy dust. 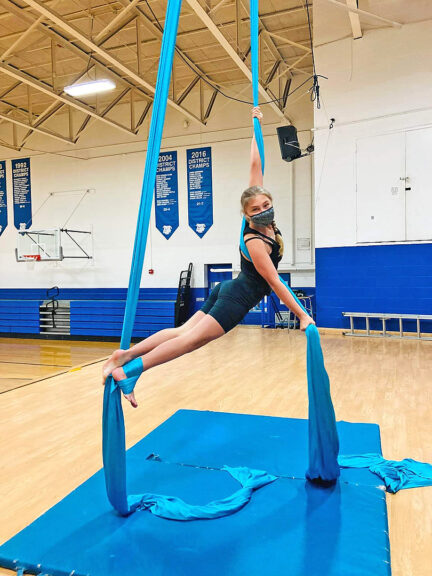 “Kids can learn very quickly,” she said. “They’re so fun, and they teach me things, too — they have so much creativity. As someone who has done [aerial work] for so long, you can kind of forget that creativity.”

Sparrow-Knapp added that she’s grateful that the theater department was able to share the gym with the athletic department, so that the actors using the aerial equipment could both practice and perform their challenging routines in the same environment.

In addition to flying, what would a “Peter Pan” production be without a little swordplay between Lost Boys and pirates? YS High School alumna, actor and fight choreographer Kayla Graham, who has worked on past school productions, returned to aid the cast in fight scenes for the first time since the inception of the pandemic.

“We are so glad to have her back and part of the artistic team,” Sparrow-Knapp said. “It’s not easy work [for the students] — and for Kian Barker [who plays Captain Hook], he not only has a hook on his right hand, he’s got a sword in the left, fighting with his nondominant hand. So they’ve been working hard.”

The work has been challenging for the show’s technical crew as well, Sparrow-Knapp said. The production involves large set pieces and sequences with lighting effects, as well as a certain amount of hustle to labor across the large gym space.

“The tech kids have really worked hard, and Sydney Roberts in particular, as our stage manager, has just been stellar,” she said. “It’s really lovely to see. We have a very bright future ahead with these kids.”

Sparrow-Knapp added that the show’s costumes — “They’re just gorgeous,” she said — were created by villager Kate Mooneyham. The only costume that stumped the crew was one for Nora Bongorno, who plays the famed crocodile responsible for Captain Hook’s missing hand — until a chance discovery was made.

“I was looking for something in the bus barn [where the theater department stores costumes and set pieces], and all of a sudden — oh my golly — there’s a papier mâché crocodile head, and it’s in really good condition,” Sparrow-Knapp said. “And then [Sydney Roberts] and I opened up a bin next to it, and a gorgeous crocodile costume comes popping out, and it fits Nora Bongorno like a glove.”

Sparrow-Knapp said she had never seen the costume before, and wasn’t sure where it came from; the schools last performed a musical version of “Peter Pan” in 2009, but she couldn’t be certain the costume wasn’t even older than that. Whatever its origins, Sparrow-Knapp said she took the discovery as a serendipitous sign that all of the work to put forward the schools’ most technically complex show since before the pandemic will pay off on opening night.

J.M. Barrie’s “Peter Pan” was first performed in London in 1904. Since then, thousands more performances and adaptations have been enjoyed all over the world. After more than a century, what keeps “Peter Pan” in the air, so to speak?

Sparrow-Knapp said she thinks it has to do with the source material’s themes, which are not only complex, but sometimes dark, and relatable to audiences of all ages. “Peter Pan” deals with the dynamics between children and parents, children themselves and with the nature of aging and, inevitably, death.

“So Peter, being eternally young, is sort of condemned to live in this moment, having to experience firsts over and over again,” she said.

The schools’ production of “Peter Pan and Wendy” aims to lean into the shadowy impressions implied by this notion of eternal youth — “This isn’t the Disney version,” Sparrow-Knapp said, which she said is more a straightforward celebration, and less an examination, of childhood.

Indeed, in J.M. Barrie’s works, and in this adaptation of “Peter Pan and Wendy,” childhood often looks like cruelty to its adult characters. Ultimately, growing up means being left behind at the window as Pan flies back to Neverland.

But he will return to take new children — and new audiences — on his adventures, as the play’s last lines intone, so long as children are “gay and innocent and heartless.”

“Peter Pan and Wendy” will be performed Thursday-Saturday, Nov. 17-19, at 8 p.m.; and Sunday, Nov. 20, 2 p.m. All performances will be held in the Yellow Springs High School gym. Admission is $15 for general admission, $10 for seniors and $5 for students. Tickets may be purchased online at showtix4u.com/event-details/68163.

The performances will feature scenes that include flashing light effects.