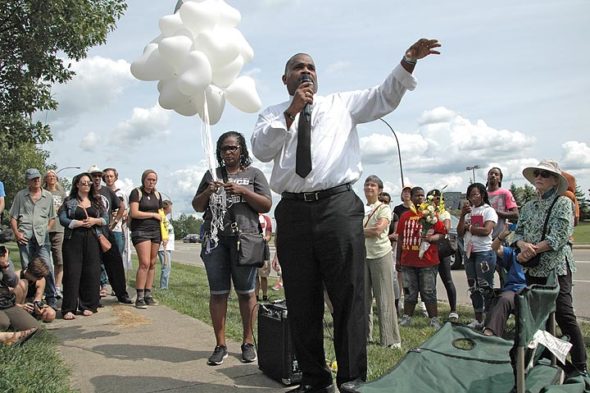 On Wednesday, Nov. 23, a three-judge panel of the Sixth Circuit U.S. Court of Appeals revived a wrongful death claim against Walmart by the family of John Crawford III.

Crawford, a 22-year-old Black man, was fatally shot by a police officer inside the Beavercreek store on Aug. 5, 2014.

On that day, police responded to a single 911 report that a Black man was carrying a gun and pointing it at children in Walmart. The gun in question was a pellet rifle for sale at the store, and video evidence revealed Crawford to be walking casually through the aisles with the gun at his side. The responding officers shot Crawford within seconds of encountering him in the store’s pet food aisle.

Although a judge dismissed an initial wrongful death claim in 2020, the appeals court concluded last week, by a vote of 2–1, that “a reasonable jury could find that Walmart failed to prevent Crawford from carrying a look-alike AR-15 openly around the store,” and therefore could consider the store responsible for Crawford’s death.

According to the appeals court: “Walmart had no policies in place to prevent customers from picking up unsecured and unboxed pellet guns … and carrying them around the store without employee supervision. Walmart did not train employees to respond to such situations if they caused any alarm.”

In its decision, the court also cited earlier testimony from Beavercreek police officer Sean Williams — the officer who fatally shot Crawford — who said that had he known Crawford was holding a pellet gun, not an assault rifle, he would not have fired the deadly shots. Additionally, according to Williams, he would not have shot Crawford had he been holding a boxed pellet gun or if a Walmart employee had been assisting him.

A grand jury declined to indict Williams in 2017, and the Crawford family reached a settlement agreement of $1.7 million with the city of Beavercreek in 2020.

The Crawford family’s attorney, Michael Wright, of Dayton-based Wright & Schulte LLC, told the News this week that he’s pleased with the appeals court’s recent decision to let the family move forward with charges against Walmart. He said he hopes to have a trial date set for early to mid-2023.

“The family is happy that we get to proceed and hold Walmart accountable for what happened inside their store,” Wright said. “We wholeheartedly agree with [the court’s decision]. Walmart controlled all of the circumstances that led to John’s death.”

The Associated Press reported that Walmart continues to deny that its policies caused Crawford’s death.

“We respectfully disagree with the court’s ruling, and we will continue defending the company,” Walmart spokesperson Randy Hargrove said.

Villager and civil rights activist Bomani Moyenda said he believes the Crawford family is fully justified in pressing charges against the retailer.

Echoing what the appeals court ruled, Moyenda said, “I think Walmart should have boxed the rifle or secured it so no one could walk around with it.”

“I would hope for a sizable monetary [gain for the family] as a form of accountability,” Moyenda said. “But there can be no justice since John Crawford III is dead and can’t be brought back.”