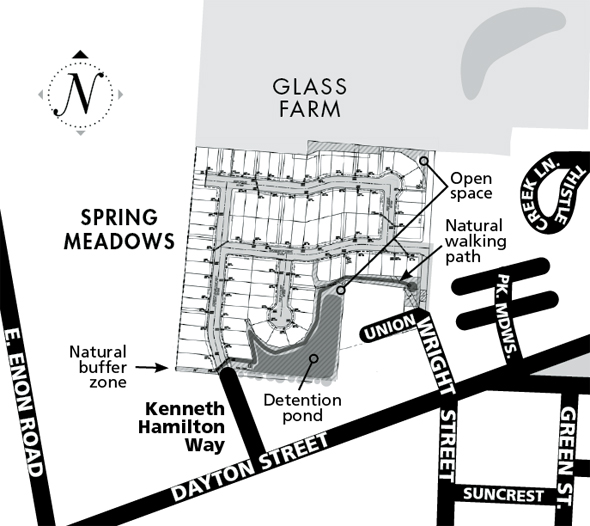 At the most recent Planning Commission meeting on Tuesday, Oct. 11, commission members unanimously approved a final plat for a proposed subdivision dubbed “Spring Meadows.” Sited for the 23 acres at 402 N. Wright Street, the subdivision would contain 90 single-family homes. The final plat is now set to go before Village Council in an upcoming meeting. (Map data courtesy of DDC Management, LLC)

By the end of 2022, the composition of the Yellow Springs Planning Commission was markedly different from how it began the year.

In the first weeks of January, amid the villagewide discussions of granting Oberer Land Developers a new zoning status for the company’s then-held 53 acres on the south end of the village, commission member Sarah Sinclair-Amend and alternate Matthew Kirk resigned from the group. Villagers Gary Zaremsky and Scott Osterholm, respectively, filled those positions. 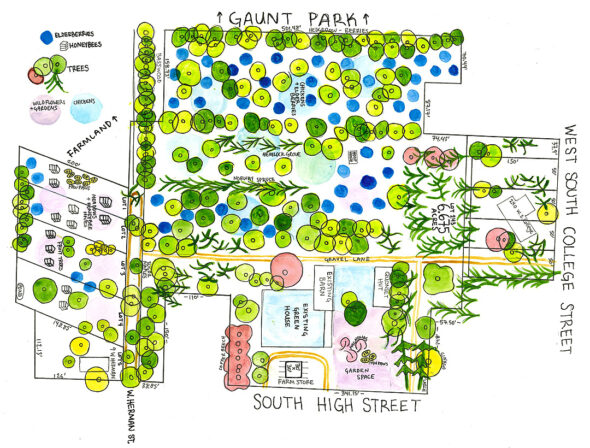 The above drawing by Rose Pelzl shows the proposed conditional use of 8.2 acres fronted by West South College and South High Streets as a farm. The land is currently zoned for residential use. (Reproduced from Rose Pelzl’s conditional use application)

In March, Planning Commission gave the green light to a proposal for a small farm and adjacent farm goods store on South High Street.

The commission approved villager Rose Pelzl’s conditional use request to allow her to run her farm business on the 8.2 acres currently zoned for residential use. Pelzl’s plan for the land, dubbed “The Forest Village Farm,” includes establishing a garden area, planting various types of berries and nuts, keeping hens for egg production and maintaining honeybee hives.

Also in March, Miamisburg-based development company DDC Management, LLC, submitted a preliminary plat plan and hearing request to the Village to build a major subdivision on the 23 acres at 402 N. Wright St.

According to DDC’s plan, the subdivision — initially called “Glass Farm Estates,” but later renamed “Spring Meadows” — would include a total of 94 lots, 90 of which would be suitable for building single-family homes on an average of 0.25 acres per lot. The remaining four lots, totaling nearly four acres, would be preserved as open space. The property is zoned R-B, or moderate density residential.

Distinct from a homebuilding company, DDC’s intentions are to plat out the land and build the planned neighborhood’s infrastructure, which would include roads, utilities, a detention pond, sidewalks, natural pathways, a playground and other features. Should DDC be allowed to move forward with development, the company would sell the 90 lots on the open market upon completing the infrastructure.

Planning commission members unanimously approved the preliminary plat application at the group’s April meeting, but necessitated modifications related to ecological preservation on the land and increasing the size of buffer areas between the proposed subdivision and surrounding neighborhoods. Then, at the group’s October meeting, members unanimously approved DDC’s final plat plan. DDC must now go before Village Council to get that body’s approval of the final plat plan before the company can begin development.

In April, Planning Commission reviewed and approved a conditional use application submitted by Don Beard, owner of Peach’s Grill, to expand his restaurant’s outdoor patio area by attaching a new pavilion to the existing building. Construction on the pavilion ended in the summer and ultimately added more space for additional restaurant seating.

On Monday, Dec. 12, Planning Commission approved a plan set forth by Iron Table Holdings, local resident and comedian Dave Chappelle’s development company, to demolish the downtown structure that most recently housed Earth Rose. The plan also entails the construction of a new building that will have space for two retailers on the ground floor and an apartment upstairs. (Rendering by Crome Architecture)

On Monday, Dec. 12, Planning Commission approved a plan set forth by Iron Table Holdings, local resident and comedian Dave Chappelle’s development company, to demolish the downtown structure that most recently housed Earth Rose. The plan also entails the construction of a new building that will have space for two retailers on the ground floor and an apartment upstairs.

This year, Planning Commission approved the establishment of four new transient guest lodgings, or Airbnbs, bringing the village’s total to 43.