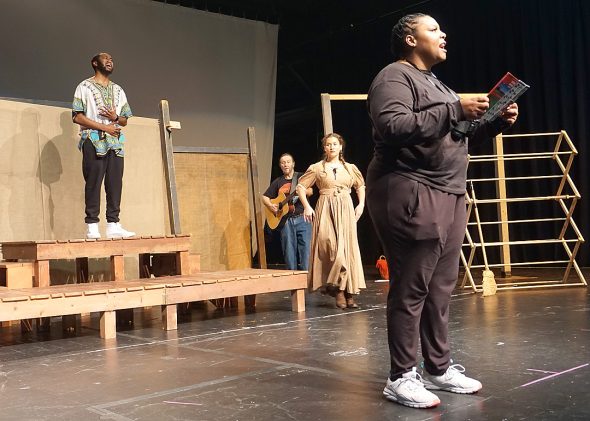 Pictured left to right: Myles Wright, who portrays both Addison White and villager John Booth, who is a descendant of White; Raiford Faircloth and Gabrielle Archer, who play Udney and Amanda Hyde, Mechanicsburg abolitionists who aided White against the marshals; and Evelyn LeTeshia, who plays Evelyn, a modern-day teenager connecting with White’s story. (Photo by Lauren "Chuck" Shows)

In the Twi language of Ghana, the word “sankofa” means “go back and fetch it.” The word is often associated with the image of a bird, its head craned, looking behind at what has come before and clutching an egg in its beak, but with its feet planted forward, aimed at what comes next.

“It means that we can look at the past to get what we need for a better future,” wrote playwright and director Daniel Carlton in educational materials for “Freedom Flight,” a one-act play with music that will debut at the Foundry Theater on Friday, Jan. 13.

The play, performed by Mad River Theater Works, is open to all ages, but aims to speak directly to audience members in third through eighth grades. Following the local debut of “Freedom Flight,” the locally based theater company will perform the play on tour nationwide.

In “Freedom Flight,” both the image of sankofa as a bird and its deeper thematic significance bolster the narrative. The play presents the history of Addison White, a 19th-century Black American who escaped from enslavement in Kentucky. White made his way to Mechanicsburg, Ohio, where he was aided by community members, particularly abolitionist and farmer Udney Hyde and his daughter, Amanda, in standing against pursuing federal marshals.

His story is interwoven with that of Evelyn, a fictional Black teenager and aspiring ornithologist in the 21st century who is depicted as a descendant of Addison White. Following a racist encounter with a security guard at a park where she is birdwatching, Evelyn dreams of interacting with Addison White and those he meets on his journey, putting her in dialogue with her ancestral past as she considers her future.

With the exception of a break in December for end-of-year holidays, the company members of Mad River Theater Works, most of whom hail from outside of Ohio, have since November lived and rehearsed “Freedom Flight” on the campus of Antioch College. During that time, they’ve worked collaboratively to delve into Carlton’s script, synthesizing their characters and honing the show’s text and music.

“[‘Freedom Flight’] is not a play about slavery — this is a play about liberation,” Carlton said during a recent rehearsal at the Foundry Theater.

Carlton, a Black playwright based in New York City, added that understanding Addison White’s history in this way — as the story of the self-liberation of a Black man in community with white allies — is crucial to “Freedom Flight.”

“I hate the narrative that [those who escaped from enslavement] were just helpless Black people — it discounts all of their liberation aspirations and dreams and actions,” he said. “Without [white abolitionist] Udney Hyde, Addison White might have been captured — but Udney Hyde didn’t take him off that plantation. … We need to leave the young people with the sense that we can work together.”

Mad River Theater Works, which was formed in Yellow Springs in 1978 and moved to West Liberty in 1985 and later to Zanesfield and Bellefontaine, returned to the village last year. “Freedom Flight” is not the first play based on the life of Addison White that has been performed by the company: “Freedom Bound,” another play about White, was part of its repertoire for about three decades.

“[The previous play] positioned the abolitionist in a role that we weren’t really comfortable with, and we wanted to reposition it,” said villager Chris Westhoff, who has been the managing director for Mad River Theater Works since 2009. “Rather than trying to rework that play, [Carlton] and I decided, ‘Let’s create a new piece of work.’”

In order to break new ground with “Freedom Flight,” Carlton consulted with Ohio-based research librarian and author Kathy Schulz, whose latest book, “The Underground Railroad in Ohio,” is set to debut this year. He also consulted with a source close to Yellow Springs: villager John Booth, who is the great-great-grandson of Addison White.

Booth, who is a poet and musician, told Carlton about family heirlooms passed down from Addison White and his second wife, Amanda: a trunk that, at one time, held items including photos of the couple, some historical documents and a Union soldier’s cap from White’s time fighting in the Civil War as part of the 54th Massachusetts Regiment.

The trunk, which is an important part of the narrative of “Freedom Flight,” is now on perpetual loan to the Gammon House, the historic home in Springfield built in 1850 by George and Sarah Gammon, who were Black conductors on the Underground Railroad. Some of the items that were originally in Addison and Amanda White’s trunk were later burned by one of Booth’s family members, who did not want the family to focus on their ancestors’ enslavement.

Though the play’s narrative does feature some fictional characters and events in its present-day scenes, the burning of the items in Booth’s family’s trunk is part of the narrative of “Freedom Flight.” So is Booth himself: He is a character in the story, and his poetry is featured in the play’s text.

Throughout the process of writing “Freedom Flight,” Carlton said he kept young audience members in mind — not only in terms of being sure they understand Black Americans’ historic roles in their own liberation, but also with consideration for how they feel when they leave the theater.

“I was often very offended when schools took me to see plays about slavery — I never left feeling better than when I went in,” he said.

To that end, Atlanta-based actor Myles Wright, who is new to the company this year and who plays both Addison White and John Booth, said he has envisioned Addison White in a very particular way while aiming to bring the historical figure to life for young audiences.

“Addison White is a superhero — I don’t know any other way to articulate it,” Wright said. “I hope the kids can be inspired and realize that you can always fight … and make your own path.”

In a similar vein, villager Brendan Sheehan, who plays both the white security guard involved in the racist incident against Evelyn at the beginning of the play and the “lawman” pursuing Addison White, said he had some reservations about how seeing racism portrayed on stage might affect young audience members.

“But through conversations with [Carlton and Westhoff], all of those were systematically alleviated,” Sheehan said. “Those roles are serving Addison White’s story.”

Gabrielle Archer, who is based in New York City and is also new to the company, said she drew on her own personal identity and multiracial heritage when playing two characters: Udney Hyde’s teenage daughter, Amanda, who is white; and Evelyn’s Aunt Ida, who is Black.

“It’s tough, because there is this divide within myself as well, because I’m Black and and I’m white,” she said. “It’s been an opportunity for me to delve into my ancestry and all the things that have brought me to this very moment.”

The concept and imagery of sankofa were crucial to Carlton’s vision of how the story of Addison White, which is marked with pain and cruelty as well as courage and liberation, should be presented to children in the audience. It’s important for young people to know what happened in the past, he said, but it’s also important to be able to envision a path forward.

“When we deal with historical theater that goes to young people, often it does not leave a door open to hope,” he said. “It’s like broccoli — like, ‘Here, take a serving of this, it’s good for you.’ It can leave young people feeling like they have no agency, and that’s a disservice to young people.”

Evelyn LaTeshia, a seasoned member of the company who plays Evelyn — a role Carlton wrote with the South Carolina-based actor in mind — said a sense of agency for the audience is one of the things she values most about “Freedom Flight.” In particular, she referred to a scene in which young Amanda Hyde breaks the fourth wall to encourage the audience to speak against the federal marshals who have come for Addison White on Udney Hyde’s farm.

“That may be one of the first moments some of those children have felt like they had a voice — here you are in the middle of this play, and you get to shout back,” LeTeshia said. “And you get to not  only shout, but to do what’s right, and help people — can you imagine how empowering that is to little people who come in and feel like they have no power?”

“Freedom Flight,” presented with support from the Ohio Arts Council and in residence at Antioch College, will be performed Friday, Jan. 13, beginning at 7 p.m. Admission is $10 for adults; ages 17 and under are encouraged and will be admitted at no charge. Following the 55-minute performance, a brief Q&A session with the cast will be held and then a talk-back session with Kathy Schulz, John Booth, Daniel Carlton and historian Kevin McGruder.