A Brazilian beat for dancing feet 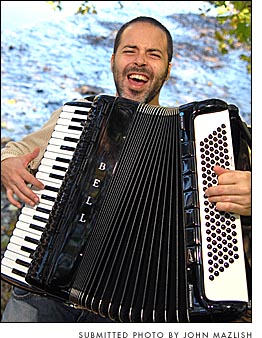 Rob Curto and his Sanfona Project plays Forró, a style of dance music from northeastern Brazil, Friday, April 11, at 8 p.m. in Kelly Hall on the Antioch College campus.

Click on to the Web site of New York City-based accordionist and composer Rob Curto at http://www.robcurto.com and when the music starts, just try to keep your body motionless. Concentrate on keeping your shoulders completely still as they fight to move in time with the various rhythms inspired by musicians and vocalists from northeastern Brazil. Then visit his site at http://www.forroforall.com , all the while resisting the urge to bob your head and sway your hips to the music known as forró pé de serra. Go ahead. Just try to keep from losing yourself in the jazzy blend of his band’s Brazilian beat.

Or come this Friday, April 11, to Kelly Hall on the Antioch College campus to hear Curto’s Sanfona Project, which will perform at 8 p.m. General admission is $10, and the event is sponsored by CityFolk of Dayton.

Curto knows music can be a powerful way to communicate. “My earliest musical influences came from jazz,” he said in a recent interview, “an older style of jazz that was more dance-oriented, swing-era, music from the ’30s and ’40s. My father plays saxophone and he grew up playing that kind of music. My parents bought me a piano when I was 9 and I started playing piano and improvising and writing music. I’ve been into improvisation and music that makes people dance, music that communicates in a very direct way.”

Introduced to the accordion 13 years ago, Curto started to gravitate towards different styles of traditional music from all over the world.

“I like the accordion,” Curto said. “I saw Buckwheat Zydeco playing outside New York’s Museum of Natural History. That inspired me and I bought an instrument. Then I discovered Brazilian music. It communicates directly, people dance to it, the lyrics are incredible, there’s a lot of harmonies. A lot of things I learned from artists that I like are there in Brazilian music. So it kind of brought everything back for me.”

Forró (pronounced foh-HO) is a specific style of dance music from northeastern Brazil, an area known for its strong cultural influence and wide variety of musical styles. Nothing makes Curto and his band happier than an audience that likes to get up and dance in the aisles. They’ll be inviting audience members to do just that when they perform at Antioch. This is the second piece of a two-piece pilot project presented by Cityfolk with support from the Morgan Family Foundation. The first piece took place in February when saxophonist Jane Bunnett and her band, The Spirits of Havana, performed at Kelly Hall.

“Arts organizations are starting to hear more and more from communities that they would like programs brought into their community,” said Barber. “This is a pilot program to see how a potential ongoing music series would be received in Yellow Springs.”

As with Jane Bunnett and her band, Rob Curto’s band will also be conducting hands-on workshops on Friday at the McKinney School and Yellow Springs High School as part of the series.

“It’s actually one of our favorite stops in the Midwest,” said Kettner. “People seem very open in Yellow Springs and love to dance to anything that has a good beat.”

If all goes well, this pilot project could expand into something larger.

“When we get to the other side and see how both pieces of this project have been received,” Barber said, “we’ll look closely at the potential for offering it next year.”

Cityfolk has also been in the loop on developments regarding a new performing arts center for Yellow Springs.

“We’re very interested in the potential for that facility being home to what we do,” he adds. “We’re interested in investing in Yellow Springs.”