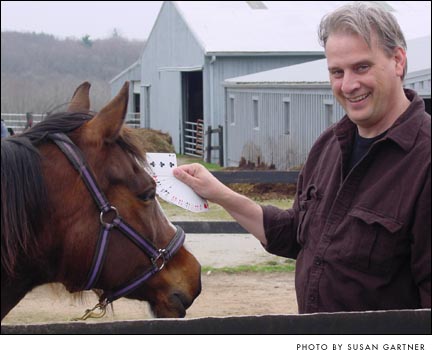 Internationally known magician David Williamson will perform on Saturday, April 26, at 2 and 7:30 p.m., at the Cedarville Opera House in a benefit for the opera house and the Riding Centre.

‘An evening of mirth and magic’ to benefit Riding Centre

It’s a profound experience to participate one-on-one in the sleight-of-hand act of a professional magician. You watch intently as he manipulates a set of coins, making them disappear and reappear with seamless precision.

Then he gathers up the coins off the table and moves to drop them in your hand. You extend your hand, expecting an ordinary transaction and suddenly and silently — no coins. It is such a disarming sensation not only to your hand but to your entire body, as if the physical properties of the universe have temporarily been suspended.

My immediate reaction was to push away from the table and bolt. But I was interviewing Yellow Springs resident David Williamson to promote his upcoming magic show benefit, “OperaCadabra, An Amazing Evening of Mirth and Magic,” and didn’t want to appear rude. So I covered my eyes and screamed instead.

Named #2 in the current issue of Magic magazine’s Top Ten Funniest Acts in Magic Today, Williamson is well acquainted with my reaction.

“I tell young magicians,” he confided, “‘We toss these miracles off all the time for each other. But you have to remember: most people walking this earth have never seen up close magic live in their hands. It’s a very strong thing.”

Williamson’s magic will be on display next weekend at “OperaCadabra, An Amazing Evening of Mirth and Magic” to take place at the historic Cedarville Opera House, intersection of State Routes 72 and 42 in Cedarville, on Saturday, April 26, with performances at 2 and 7:30 p.m. Proceeds will be split between the Opera House and the Yellow Springs Riding Centre.

Williamson is a master at sleight-of-hand magic, and he’s been practicing since he was 8 years old, living in Xenia.

His tale will ring familiar to other magicians, he believes.

“I was taking out library books on magic,” Williamson recalled. “I got the magic set, the magician came to my school. In second grade we had a little reader about Harry Houdini. About that time I learned the little trick at the back of the reader about how to make a coin disappear. I was pretty good at that. For some reason, all little boys get into magic. Then there’s the few who have the genetic defect and stick with it. When magicians get together I call it an encounter group because we all have similar histories. We all have the same books that we stole from the library and didn’t return because we didn’t want our friends to know how the trick is done!”

There exists a strong bond in the world of magic and not just between members and their deck of cards, Williamson said.

“It’s an immediate rapport,” he said. “You could drop me anywhere on earth and with one or two phone calls I could have a warm meal and a place to stay. Magic clubs are a very fraternal kind of organization because we’re keepers of secrets. Most of us aren’t trying to do it for a living. You go to a magic convention and you’ll have a skateboarder next to a federal judge and they’ll be on the floor showing the latest card trick to each other.”

When he moved back to Ohio with his wife, Marsha, after living in the Washington, D.C., area for 20 years, Williamson wondered how he was going to stay connected to his friends in the business. That’s when the idea for a magic show benefit materialized and he put out the word to industry pals.

“Now I have a waiting list of magicians from all over the country who have heard of this benefit and want to come do it,” Williamson laughed. “I tell them, ‘There’s no money in it. You’ll lose money if you come. Maybe I’ll buy you breakfast at Young’s [Dairy]!’”

Williamson’s interest in the Riding Centre comes from his wife, Marsha, who used to ride horses as a child. After the couple moved to town, she leased one of the center’s horses, eventually bought it, and now spends a lot of her time there volunteering with the kids.

“We believe in their mission,” said Williamson.

The Riding Centre Association is a nonprofit organization that provides a foundation in safe riding, care and management of horses, through affordable lessons to children and adults of diverse capabilities from Yellow Springs and surrounding communities.

The Riding Centre also offers riding lessons for handicapped children. Some of the benefits derived from therapeutic riding are improvements in balance and increased strength of core muscles, according to center director Carolyn Bailey.

“It’s a lot of different therapies without having to be in a therapy room or a counselor’s room,” she continued. “Kids in wheelchairs don’t get to go down trails very often. It allows them to be outside, away from their everyday life.”

Bailey is happy to be a benefactor of the OperaCadabra benefit.

“The more income we get, the more we can keep offering riding at an affordable cost,” she said.

Williamson hopes families will come to the event.

“With all the video entertainment and Internet,” he said, “you’d think kids would be jaded. But it’s just the opposite. Kids these days are passively entertained. They go from one screen to another screen. So when somebody does something like this, it’s a whole new set of possibilities.”
Tickets for adults are $20 or $15 in advance, children 12 and under $9 or $7 in advance. Call 937-766-4531 for more information

* The author is a free-lance writer for the News.