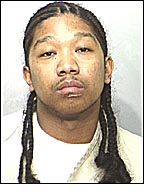 Yellow Springs police, the Greene County Prosecutor and the Greene County Agencies for Combined Enforcement (A.C.E.) announced at a press conference on Friday, May 2, that a Greene County grand jury has indicted former Yellow Springs resident Umoja Iddi Bakari with 22 counts related to his running a drug ring between Columbus and Yellow Springs. Police have issued a nation-wide arrest warrant for Bakari, who authorities say has a violent history and is potentially dangerous.

“We know that people in the Yellow Springs area and Franklin County have information we need to eradicate this group and stop the damage that’s been done to this area,” First Assistant Prosecutor Suzanne Schmidt said on Friday. “We need people to come forward and do the right thing.”

The drug racketeering Bakari is charged with leading is related to the 2002 murder of Timothy Lopez by his Yellow Springs High School classmate Michael Rittenhouse, and according to Yellow Springs Police Chief John Grote, police have actively pursued “within the very recent past” drug activity in Yellow Springs related to that case. Rittenhouse was convicted in 2005 for killing Lopez and is serving 15 years to life in the Lebanon Correctional Institution.

“The whole event culminates with things that have been going on in Yellow Springs for quite a few years, and it’s taken quite a toll not only on our community but on many surrounding communities,” Grote said. “Kids in Yellow Springs see Iddi when he comes back to town, driving a nice car with nice things, and that attracts them.”

Police first became aware of Bakari’s connection to the Lopez murder when in 2004 he was arrested by the Franklin County Sheriff after abducting and shooting someone in Columbus in furtherance of what A.C.E. Task Force Officer Bruce May called Bakari Enterprise. In exchange for a lesser charge of misdemeanor assault, Bakari gave police information that led to the location of Lopez’s body and the prosecution of the case.

Since then, according to the indictment, Bakari has remained engaged in “a pattern of corrupt activity” that involves an estimated 10 to 20 other primary people in their early to late 20s in the Columbus and Yellow Springs areas. The 22-count indictment charges Bakari with trafficking in cocaine and marijuana, robbery, conspiracy, kidnapping and money laundering by investing proceeds from the enterprise in real estate in the Columbus area between January 2001 and April 2008. Though prosecutors would not specify the exact amount of drugs involved, the indictment indicates the enterprise involves between 200 grams and 1 kilogram of marijuana and between 500 grams and 1 kilogram of cocaine, which May said was a “tremendous” quantity worth millions of dollars.

“This was a very lucrative organization,” he said.

The proceeds were used to purchase a white Lexus SUV and six properties in the Columbus area, including one on Grasmere Avenue, Gaylord Place, Hamilton Road, Wayne Avenue and two on Queensrowe Drive. Police raided these properties on April 30, and found evidence they hope will lead to more information about their case. All of the purchases and properties have been placed under forfeiture with active liens and will eventually be sold, officials said last week.

Law enforcement officials also charged Bakari with aiding or abetting co-conspirator Chelsea Hornsburger in the offense of money laundering for the collection of payment for drugs he sold through her. Hornsburger, who police say was living with Bakari at one of the Queensrowe Drive addresses, was also indicted by a Greene County Grand Jury with eight counts of engaging in a pattern of corrupt activity, including complicity to trafficking in cocaine and marijuana and money laundering for Bakari Enterprise. Hornsburger, 20, was arrested on April 30 as a result of the indictment and was transferred to Greene County Jail on Monday to await arraignment with Judge Campbell in Greene County Common Pleas Court.

Bakari is 28 years old. He was born in the Philippines, where he was raised, before moving to Yellow Springs with his family, where he graduated from Yellow Springs High School in 1999 and moved to Columbus two years later. He was married to Bekelech Asefa in Franklin County in 2005, and he has one child. He also has family members who reside in Yellow Springs.

Bakari has obtained a false driver’s license in the name of Elijah Smith, and he is also known to go by the names of “Rico” and “Fan,” Schmidt said on Friday. He was shot in the knee as recently as December.

The maximum possible sentence for Bakari if convicted as charged is 147 years in prison and $275,000 in fines. Hornsburger would get a maximum of 37 years in jail and $77,000 in fines.

Anyone with information related to Bakari’s location or his enterprise are asked to contact either Yellow Springs police at 767-7206, the A.C.E. Task Force at 562-7980 or the prosecutor’s office at 562-5250.