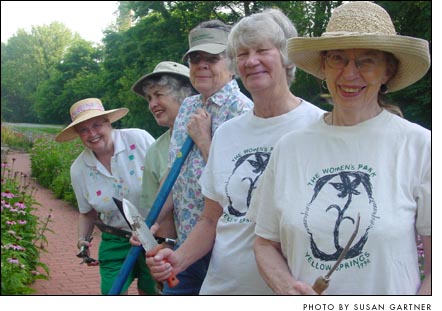 Volunteer gardeners at the Yellow Springs Women’s Park include, from left, Liz Milburn, Macy Reynolds, Helen Eier, Mary Cargan and Judy Williams. The park will celebrate its 10th anniversary this Sunday, July 13, from 2 to 4 p.m., at the garden on Corry Street.

Park flowers into its first decade

What if you were given the task to create a lasting monument to commemorate the contributions of a significant number of people? Instead of a bronze statue or marble marker, however, you decide to construct something different, something alive and interactive that would change every week — every year — offering each visitor a stunning new gift with every visit.

How can a monument do that?

The solution to this dilemma is a unique and vibrant “monument” located on Corry Street next to the bike path, across from the Antioch Theatre. It stands approximately 600 feet long, 20 feet wide, and is covered with mulch. It includes 12 dedicated benches, a stainless steel sculpture, 492 ceramic tiles, and over 30 varieties of native Ohio plants.

A celebration of the 10-year anniversary of the Women’s Park of Yellow Springs will be held from 2 to 4 p.m. on Sunday, July 13. Music will be provided by Heartstrings and refreshments will be served.

Just like its stone and bronze counterparts, this monument gets its share of Fido fertilizer. Unlike a statue, however, the Women’s Park requires constant upkeep. Thanks to the efforts of a small but dedicated group of volunteers, the park remains healthy and vital — sometimes a little too vital.

“We need more help!” laughed Women’s Park volunteers Macy Reynolds, Helen Eier and Liz Milburn, who were up to their elbows in dirt and big bluestem on a recent Monday morning, dutifully tending to their massive garden.

“We need weeders!” said Eier, a master gardener and the original garden maintenance coordinator. Eier believes many people in town associate her with weeding the Women’s Park. “People often say to me, ‘I’ve seen you somewhere,’ ” she said. “I tell them, ‘You may know me from the rear’.”

Reynolds is also a master gardener and Milburn is a master-gardener-in-training, but all three emphasized that this is not a requirement to work in the total native plant garden.

“The master gardeners working here are very knowledgeable,” said Eier. “You can come to volunteer and you can ask things and learn about the plants. Whenever there are extra plants, you can have them for your own garden. We’re trying to attract more volunteers. That’s been an on-going problem with the park. Some of us are getting older — me in particular!”

These three women, along with Mary Cargan and Judy Williams, currently comprise the core group of gardeners who keep the park maintained and mulched. A scheduled work time of 8:30–10:30 a.m. on Mondays has become routine, but volunteers drop by at other times as well.

Milburn, a Fairborn resident, said she looks forward to her Monday responsibilities on Sunday night.

“This is a great place to work!” said Milburn, who appreciates the park as a place where she can obtain the hours necessary to receive her master gardener credentials. “It’s fun, you’re around fun people, and it’s not as labor intensive as taking out [invasive] plants from the Glen.”

But the park is more than just coneflowers and coreopsis.

“People look at the park and say it’s beautiful,” said Eier, “but if they want to know more, there’s more of an opportunity.”

That opportunity can be found in the book, Celebrating Women, The Women’s Park of Yellow Springs, which was compiled after the park’s dedication on July 20, 1998. The date was intentionally chosen for its historic significance — the 150th anniversary of the first Women’s Rights Conference in Seneca Falls, N.Y. One hundred and sixty years later, this historic event remains largely absent in the collective consciousness. It is this lack of recognition for the achievements of women that was the catalyst for the Women’s Park.

Plant purchases and repairs to the park come out of The Women’s History Project of Greene County, a 501(c)3 organization that was germinated by longtime village resident Imogen “Gene” Trolander (1924–2000).

“The Village gave us that land to build the park,” said Joan Ackerman, president of the Women’s History Project, “and we are the ones that have taken on the challenge of maintaining it.”

Occasionally outside contractors are brought in for some of the more labor-intensive work, but “most of the grunt work is done by the volunteer gardeners,” said Ackerman.

The ceramic tiles pay tribute to nearly 500 women — living and deceased — and were designed by local ceramist Evelyn LaMers. The tiles bear names and brief descriptions like “First Female Professor in the Nation” and “Always Ahead of Her Time.” Copies of the book, which contains fuller biographies, will be available for purchase at the celebration.

“The park was meant to pay tribute not just to one woman or a few, but to all women everywhere,” said Eier, who contributed the tile that reads “Every Woman.”

From picnics and art classes to quiet conversations, the park is well-used and well-loved, as evidenced by the constant flow of appreciative comments.

“Thank you for taking care of the garden!” yelled one biker as he peddled past.

“Looks beautiful!” shouted a group of women walkers with their toddlers in tow.

“That happens all the time,” said Reynolds, as she pounced on another pesky weed. “You’re never here without somebody telling you how much they love the park.”

One Response to “Park flowers into its first decade”