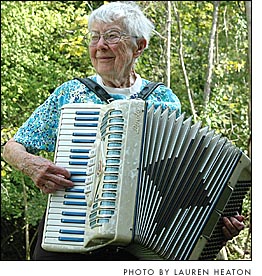 A community potluck on Saturday, Sept. 20, from 4 to 7 p.m. will honor Mitzi Manny, who will celebrate her 90th birthday. The event will take place at the Senior Center great room.

Mitzi Manny swipes her 15-pound accordion out of its tattered case as though it were a ragdoll and slips her arms through the straps like an old friend. She sways just slightly as the squeeze box sings out “When I Grow Too Old to Dream,” and the two look fit to be together. The accordion has given her many things in life, Manny said, including her name. And when she turns 90 on Sunday, Sept. 21, it will be just one of the many gifts she has used to bring joy and unity to the Yellow Springs community.

Music has been Manny’s connection to the community around her, and has shaped her life as much as anything else, she said. And because she has given so much to Yellow Springs, through music, friendship and support, the community plans to celebrate her with a potluck on Saturday, Sept. 20, from 4 to 7 p.m., in the Senior Center great room. Participants are asked to bring their own table service and photos of Manny, and to come and see what the surprise entertainment will be.

Growing up in south Dayton in the 1920s, Manny was surrounded by music. Her German grandparents who had settled in Dayton were founding members of the Eintracht Singing Society, a men’s and women’s German chorus that gave two concerts and a formal dance each year. Manny herself started playing the piano at the age of 8, soon after which she and her brother and cousins started a chamber orchestra and played regularly for parties given for her uncle’s International Tool Company.

The accordian came to her more as a challenge, when the Wurlitzer music house advertised a free accordion to the youth who, after just three lessons, could play it the best. Manny won second prize, $200 off the $400 instrument, and was hooked for good. At age 16 Manny formed the Aristocrats trio with two male vocalists, performing at Elks Club dinners and for one week’s engagement with a male quartet for a vaudeville show at the Colonial Theater under the name Four Aces and a Queen. Her sign off song at the time was “When I Grow Too Old to Dream…” (I’ll have you to remember…)

But a post-Depression world called for practical training, and the day after she graduated from Stivers High School, Manny’s father enrolled her in Miami Jacobs business school to learn the shorthand and typing that would make for a good secretary at the tool company.

The job suited her just fine at the time, she said, though she knew she needed more. With no particular spiritual background, Manny was a seeker of sorts, and was drawn as a young adult to the Unitarians. At the Unitarian church, she found she was free to believe whatever she wanted and that she learned something new every time she went to a service, which she said was “very important to me.”

The Unitarians, art and music continued to play an important part in her married life, raising two sons in Dayton. She and her husband, Robert Manny, joined the Miami Valley Folk Dancers in the 1960s, after which she learned to play the recorder. And later when they decided to move to the quieter community of Yellow Springs with their new son, Brian, Manny went to a harp concert at Kelly Hall and decided she would also learn to play the harp.

The Unitarian Fellowship in Yellow Springs found a loyal pianist in Manny, who joined the congregation with her husband in 1972, began playing for the Sunday services shortly after and has continued ever since. Gravitating toward the music, Manny joined the Unitarian Universalist Musicians Network, which began meeting every year in a different U.S. location in the 1980s to develop a new Unitarian hymnal. When the hymnal was finally published in 1993, the Yellow Springs congregation purchased their share in memory of Robert Manny, who died the previous year.

Manny also pursued an interest in art, dabbling in sketching and drawing as a young person and graduating to stained glass, silk screen, painting and pastels. She has many landscapes and one mesmerizing portrait of her great-grandson Luca Roberto Manny, smiling with every part of his angel face.

“You can’t walk past that without smiling,” she said.

Manny has traveled, with her accordion of course, on a two-week tour to Yugoslavia with the Zivio Dance Troupe, and several times with her husband on European tours. And in 1982 she became a volunteer docent for the Dayton Philharmonic Orchestra, lecturing to school children about the performances before they attend the concerts. And somewhere in between her second child and her third, she worked her way through the early childhood education program at Wright State University, finishing 16 hours short of a diploma.

What amazes longtime friend Joan Horn about Manny is her unflappable energy to continue doing all the things she began so many years ago. Manny plays for Sunday’s Unitarian service, and she will travel to Oregon next spring to the next musicians network meeting. She trained last week for the new philharmonic season, and she still plays with her “music buddy” Kevin Kelble every Wednesday at Friends Care Center. And although she is no longer playing with the Dayton Harp Ensemble, she recently attended a concert of theirs, where the whole concert hall sang “Happy Birthday” to her.

According to Horn, Manny attends every YS Kids Playhouse, Mills Lawn, Antioch School and Yellow Springs High School theater and music performance, as well as other local events and performances and often is the one coaxing Horn, 15 years her junior, to attend both the Theater Guild and Cityfolk events if they happen on the same night. Manny is also the first person on the doorstep of a new village resident and makes a point to remind others to console this person in the hospital or congratulate that family with the new baby.

“That woman, I don’t know where she gets her enormous energy,” Horn said. “She’s the Energizer bunny for sure!”

Two months ago Manny moved from her longtime home on Southview Drive, which she shared with her son, Brian, to a home at Friends Care’s Independent Living. It’s the first time she has ever lived alone, and she likes it just fine, she said. The world has changed during her lifetime, from civil rights and the women’s movement, which she embraced, to the Beatles and the technological revolution, which she decided was not for her. But she finds ways to connect that make her happy and keep her interested in seeing, hearing, learning and connecting to the community she lives in. Especially through her music.

“It lifts your heart,” she said.