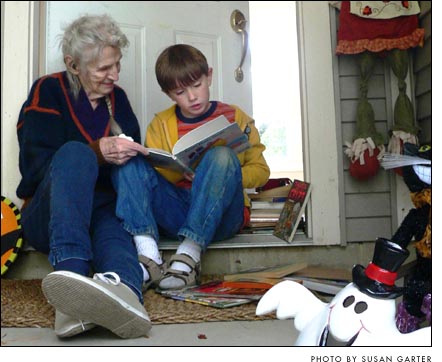 Lucille Gardner shares a book with 7-year-old Sean Adams. She continues to share her passion for reading with children in novel ways, including inviting trick-or-treaters in for a snack and a book.

On Halloween, Gardner puts the ‘boo’ back into books

“She may be hard of hearing but she listens to kids,” said Sue Hawkey of her friend and colleague, Lucille Gardner. “She really hears what kids have to say.”

Hawkey taught fourth grade at Mills Lawn School from 2003 up until this past spring. Several years ago, she was introduced to Gardner through the school’s third grade teacher, Marsha Williamson.

“She may be hard of hearing but she listens to kids,” said Sue Hawkey of her friend and colleague, Lucille Gardner. “She really hears what kids have to say.”

“Marsha developed this marvelous program where elders in the community would volunteer to come read with the kids,” explained Hawkey, “and Lucille was one of the volunteers.” What started out as a simple invitation had a dramatic and lasting impact on Hawkey and her students.

“I have never been so glad to have done something in my entire life!” she laughed.

The two women became friends almost immediately. (“Lucille used to talk about us being sisters under the skin,” said Hawkey.) Gardner agreed to visit the fourth-grade class once a week and pass out books she had collected from garage sales and trips to Goodwill.

“One time when Lucille came in,” said Hawkey, “there was a student who was playing with a little toy transformer when he should have been paying attention to the lesson. The next time she came in, she pulled that kid aside and explained how these transformer and superhero figures really trace back to Greek and Roman mythology.” In no time, the boy was immersed in a Greek mythology book.

Gardner had more than books in her bag of tricks. One time she brought in little horses she had purchased at Goodwill and taught a horse admirer how to make a barn out of a box. She taught another child how to create a map of the mythological underworld.

“When she saw we were talking about plants,” said Hawkey, “she brought in all kinds of food that had seeds in the center. I had a student who couldn’t read very well and she found out he was interested in soccer. She brought in a set of soccer rules and had him work at reading those. She had her son, Michael, come in and play soccer with this kid and then he gave him a new soccer ball.”

“I’ve been a teacher all my life,” said Gardner in a recent interview while she decorated her porch for Halloween. “I like to watch young people respond.”

Born in Erie, Penn., in 1921, Gardner taught middle school reading and science for 35 years. “I taught in Pennsylvania and in Nova Scotia,” said Gardner who quips that she “retired as a teacher but not as a person.” In 1999, she and her husband, Miles, moved to Yellow Springs, where Michael was living. Their other son, Mark, lives in Vermont.

Hawkey speaks highly of Gardner’s innate gift for discovering what each child’s interests are and finding a way to connect that to reading.

“She used to give me books about writing,” said Marlee Layh, a junior at Yellow Springs High School, “things like dictionaries and thesauruses. She would give me mystery books, and I actually like writing mysteries. My dad told me, ‘I didn’t know you even liked writing,’ and I said, ‘I don’t think I knew it, either!’”

Gardner had a weekly date not only with the class but also with Hawkey. “On the days she came, she would bring lunch for me and we talked about everything,” said Hawkey. “She and I would have discussions on what education should be like and where we were missing the boat. She really didn’t think we used the computers enough. That always thrilled me to think here’s this 87-year-old woman that is thinking so far ahead.”

Another good example of Gardner’s forward-thinking happens each Halloween when she invites trick-or-treaters in for a double-treat: a snack and a book.

The Halloween habit started as a lark not long after she and Miles moved to town. “A lot of the important things in life are accidental,” said Gardner. Another happy accident was having Kathy Adams and her family living next door.

“There’s always a crowd,” said the former neighbor, explaining Gardner’s visionary tradition. According to Adams, while parents wait on the front porch and mingle, inside kids are eating and browsing through the brain snacks loosely organized on tables. “She’ll be helping them, asking them what kind of books they like.”

Adams is not only grateful to Gardner for her annual treats but her daily treats as well.

“She built a secret garden, a tiny narrow strip in between our houses,” said Adams, describing the special relationship Gardner nurtured with Adams’ three sons, especially her youngest, Sean. “She’s true to her last name. She was really into gardening.”

Gardner created a narrow path through the secret garden where she placed small treasures for Sean to find “like Harry Potter figures and little policemen,” Adams recalled. Sean would visit with his neighbor regularly, often sitting with her on a makeshift porch swing while she read to him.

“She had an old-fashioned student’s desk and she would keep a scrapbook in there for him,” Adams said. “She would cut out pictures and write the words in the scrapbook.” The porch dates gradually evolved into tea dates with a real tea set and an old tree stump for a table.

When Gardner found out the Adams’ were moving to another house in Yellow Springs, she put together a special present for Sean. “She took his scrapbook that she’d kept in that desk and some really special books that he enjoyed with her and a picture of her with a great big flower that her husband had taken,” said Adams, “and she put those all in a bag and had him come over for his last porch reading time.”

Last year, due to failing health, Gardner decided to discontinue her visits to the fourth-grade class.

“The kids were so worried about her,” recalled Hawkey. “They asked if she was dying. We had an incredible discussion about the cycle of life and how even brief encounters can enrich our lives and stay with us forever.”

This fall, Gardner and her husband moved out of their home on Edgefield Drive and are now living with their son in his new home in Lake Shawnee near Jamestown, 10 miles east of Xenia. But the woman known to most as “Aunt Sis” will be back in her old neighborhood for one more Halloween.

“She is my role model,” said Hawkey, recalling what a difference Gardner made to her and her fourth graders. “I want to be Lucille when I am 87 years old.”