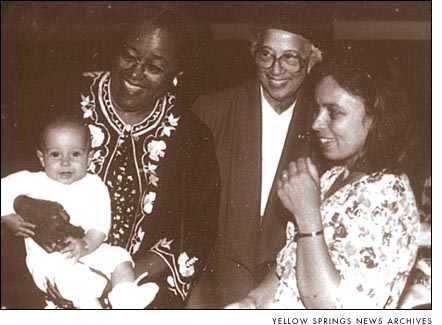 In gratitude to the community for its support over the past 50 years, the First Baptist Church will celebrate the golden anniversary of its calendar tea event, which is now called the First Baptist Annual Tea, on Sunday, April 26, from 3 to 6 p.m. In this News photo from 1992, Jocelyn Robinson, Ernestine Lucas and Ruth Wright, holding Birch Robinson-Hubbuch, attended a tea at Yellow Springs High School.

Baptist tea hits 50 with thanks

Some traditions don’t change, such as the raisin bars, spinach balls and heavenly tea cakes with orange glaze that Isabel Newman makes every year for the event known as the First Baptist Church Calendar Tea. But other traditions do, such as the fact that the Calendar Tea, which is celebrating its 50th anniversary this Sunday, April 26, 3–6 p.m., is no longer named after its 12 tables themed for each month of the year. For this year, the theme of the First Baptist Annual Tea’s golden anniversary is a “thank you tea,” in honor of the community that has supported the church fundraising event for so many years.

The Baptist congregation started its event in an era when tea parties were a major social event. In February 1959, the Yellow Springs News announced the first Calendar Tea in the same issue that included stories about an Antioch faculty ladies tea and a senior citizens Valentine’s tea, “with sassafras tea, of course!” the paper read.

The Calendar Tea was conceived by Sunday school director O’Teria O’Rear as a project of the whole church body (instead of just one of its auxiliaries) in honor of what was then called National Negro History Week, Feb. 18–25. According to a history written by Ernestine Lucas in 1984, the event featured tables for January through December and included presenters and guests from Wilberforce University, Second Baptist Church in Springfield, the Central State University color guard and Xenia residents. The proceeds from the first tea were used to purchase a movie projector for the Sunday school and Baptist training union.

Since then, the event has been coordinated by dozens of church volunteers and “tea captains” responsible for decorating and filling each table with homemade treats, among them Goldie Crawford and Margaret Goodson, who both hosted for 32 years. According to Lucas’ history, the event always began with a program, which over the years has included speakers and artistic performances. Speakers have included Wilberforce President Rembert Stokes, Margaret Howard, Jean Hudson, Perry Stewart and Wilhemina Robinson. Performers have included pianist Anna Blackwell, the Baptist youth choir, cellist Karen Patterson, a YSHS string trio, a fashion show, readings from Antioch College poet Arthur Thomas, praise dance teams, and vocal performances by Freda Abrams, Edgar Jordan, and Quinn and Cleola Ames, among others.

According to Newman, the tea has also been the church’s main fundraising event, used to fund operational costs. There has never been a charge for admission, but instead the church has donation baskets available. But the main focus of the tea is to promote fellowship between community members and to enjoy an afternoon together, Newman said.

While this year the Baptists will follow tradition by serving Mrs. Amos Douglas’ Russian spiced tea and punch with many more pastries, fruit and delectables made by the ladies of the church, they have also changed some things, starting with the fact that for the third time in 17 years, the tea will take place at the new church facility at 600 Dayton Street, instead of at Yellow Springs High School.

Betty Hairston, who has volunteered for the event for more than 20 years, is the general chairperson of this year’s tea.