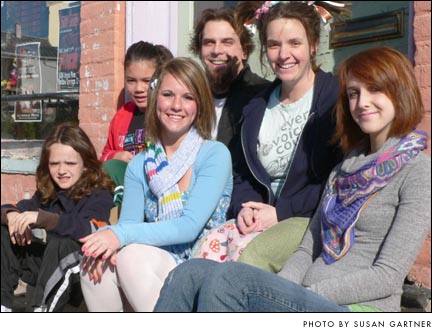 Patrick (aka “Brother Bear”) and Mindy Harney recently sat with their children, from left, Gracie, Elesha, Sophie and Molly on the steps outside Brother Bear’s Café, 118 Dayton Street. The café will be celebrating its grand opening Friday–Monday, April 17–20.

That’s what patrons will typically hear just before closing time at Brother Bear’s Café, the new coffeehouse located at 118 Dayton Street (formerly the site of the Epic Book Shop). To know how the coffeehouse came to be (and how it almost never was) adds a unique cocoa-mocha twist to that simple expression.

In a recent interview, owners Patrick (aka “Brother Bear”) and Mindy Harney revealed the story behind the business as well as the business name.

“It was 2003 and we were on our honeymoon,” Brother Bear explained. “We were down in Panama City Beach, Fla., walking along the beach and we stopped into a store to get some candy. I had this dancing bear baseball hat on, and when the cashier gave me my change, he said, ‘Thanks, Brother Bear.’”

“At the time, his hair was really long,” said Mindy, describing her husband’s bear-like resemblance and the “really long and gnarly” beard he used to wear. It was an appropriate fit for the Grateful Dead fan who liked the “Dead Head” custom of referring to one another as “brother” and “sister.”

As a cub, Brother Bear grew up in Beavercreek. After graduating from high school, he moved to Yellow Springs in ’89 and worked at Ha Ha Pizza. In ’91 he moved to San Francisco, “cruising up and down the coast,” living in Seattle, then Alaska, then L.A., working for various corporate and independent coffeehouses.

When he moved back to Yellow Springs in ’99, he started managing the coffee shops affiliated with Barnes and Noble bookstores — first in the Dayton Mall, and then in Beavercreek. By that time, his hands-on experience of serving eight to 800 customers a day coupled with the knowledge of a wide variety of coffee-brewing/roasting systems provided a substantial education. It also fueled a personal dream to sell his own coffee in his own coffeehouse one day.

In 2001, Brother Bear worked at Back Chat Café (now the site of Asanda Imports) with owner Dave Kohstall. After Kohstall closed the restaurant, the two men went into the wholesale coffee roasting business. A year later, when Brother Bear bought out Kohstall’s share of the business, he looked around for a new name. Inspired by the chance encounter with the cashier on his honeymoon, he designed a new logo that would reflect an image of himself and his new wife.

“At the time,” said Brother Bear, “Mindy had dreadlocks and I had the facial hair, so [the logo] was a combination of the two of us.”

“The first three years — 2003 to 2006 — were really intense,” said Mindy of their family-owned and operated small batch coffee roasting business. “Brother Bear Coffee was spreading and growing and everybody wanted it.”

Passionate about the industry, from their eco-friendly coffee broker (who personally inspects every farm) to the drinker, the Harneys put everything into the business.

“We feel very attached to what we do, and we put a lot of time and love into it,” said Mindy, which explains their business motto — kindness in every cup. “I love to drink the coffee and think about the little hands that picked the beans because most of them are family farms. There’s children and moms and dads and grandparents all working together on the farms. We’re all truly connected.”

The care and attention devoted to the growing, selecting, and roasting process, however, didn’t help once the coffee left their hands. Retail stores were often lax about grinding and brewing standards, adversely affecting the finished product.

“I could sell hundreds of thousands of pounds of coffee, but until I can hand somebody a cup of coffee and say, ‘This is what my coffee tastes like,’ it doesn’t do me any good,” said Brother Bear. They needed a retail location of their own.

“Alan is a great guy,” said Brother Bear of their friend and former landlord Alan Macbeth, “but the logistics of the space just wasn’t right for us.” They moved out after three months.

Soon after, the couple was approached by Gail Lichtenfels, owner of Epic Book Shop, who was considering getting out of the business. When she called, the Harneys were pursuing the idea of a mobile coffee truck that would travel the music festival circuit.

“We’ve always really felt strongly about the connection between music and coffee,” said Brother Bear. The couple was already hosting concerts on their five-acre farm (just north of Young’s Dairy) that would attract traveling musicians along with 300 to 500 fans.

They turned Lichtenfels down. A few months later, discouraged by the prohibitive cost of the truck along with record high gas prices, they called her back. This time, however, it was Lichtenfels who no longer wanted to sell.

“A month and a half ago I was ready to get out of the coffee business,” said Brother Bear, describing the dispiriting turn of events. In February, he put their coffee roasters on Craig’s List and immediately received e-mails from three interested buyers. In the meantime, he started doing interior and exterior restoration, drywall, and laying tile.

In a cosmic kind of “last call on espresso bar,” Lichtenfels contacted them to revisit her original offer. This time the couple said, “Oh, yeah!” They took their roasters off Craig’s List, purchased their new landlord’s top-of-the-line espresso machine, enlisted friends and family to help paint the walls, and brought in assorted chairs, couches, and artwork.

When they opened their doors on March 2, there was a lot more than coffee in the cup they handed to their customers. It was the culmination of a dream.

“One of the things I always envisioned was to bring a diverse crowd from Dayton, Columbus, Kettering and Cincinnati to Yellow Springs to boost the economy of Yellow Springs,” said Brother Bear, still in awe of how everything turned around.

The couple’s two oldest daughters, Molly and Sophie, (ages 17 and 16), are currently being trained as baristas. Their two youngest girls, Elesha and Gracie, (ages 10 and 9), help out at home by doing the laundry and dishes. The family loves to see the broad mix of ages that gather for hot chocolate, chess, coffee, and conversation and the musicians who randomly drop by to sing and play guitar.

“I’d applied at Starbucks and Barnes and Noble,” laughed Brother Bear, thinking back to what he was doing when they got the fateful call. “I was really glad this worked out. I just keep reminding myself of those times and then it’s not so bad being here 87 hours a week!”