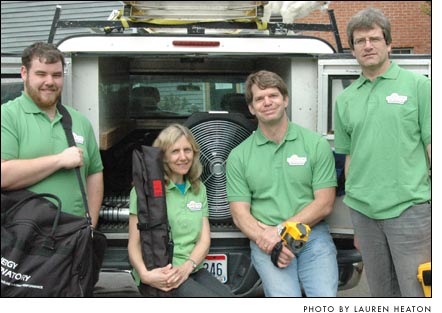 Local residents Bob Brecha, right, and Dan Rudolf, second from right, are starting netØhome, a new business that provides home energy audits. Shown at left is Mark Campbell, who will do the audits, and center, Libby Rudolf, who handles graphic design and support services. The business kicks off with a celebration this Saturday, April 18, at 7 p.m. at The Emporium.

Saving the planet, a house at a time

Most people want their homes to be more energy efficient, Bob Brecha and Dan Rudolf believe, but they just don’t know how to make the needed changes.

“People don’t know where to start,” Brecha said in a recent interview. “They know about compact fluorescent light bulbs, but after that, things get complicated.”

Beginning May 1, Brecha and Rudolf hope to simplify the process. They will do so with their new business, netØhome, which will offer home energy audits. The business will host a kickoff celebration this Saturday, April 18, at 7 p.m., at the Emporium. The public is invited to the event, which will feature wine, food and live music by Emma Woodruff.

The logo of netØhome — “saving the planet one house at a time” — is ambitious, the owners know, but they don’t see any downside to helping people conserve energy. As well as helping villagers save money with lower utility bills and, in a small way, helping the planet, netØhome will reduce energy consumption in Yellow Springs.

“I would like to see Yellow Springs become a model to other towns about how to be more energy efficient and emit less carbon dioxide,” Brecha said.

Villagers who want the company’s services will meet Mark Campbell, a mechanical engineer who will conduct the audits. During a two- to four-hour home visit, Campbell will use a variety of techniques to assess the home, including aiming an infrared camera toward walls to find holes in insulation, locating air leaks around doors and windows, and examining appliances and light bulbs.

After the home visit, the home analysis will be compiled into a report with action steps for the homeowner. The report will take into consideration how much the homeowner wants to spend, and the homeowner’s goals, which could range from just lowering his or her utility bills, to reducing energy use to net zero.

“We’re going to give you the things that give you the best payback, not only regarding cost, but CO2 savings,” said Rudolf, who recently completed RESNET training, which, he said, is the premier certification process for energy auditors.

Many people assume that retrofitting their home will be expensive, Brecha said, but that’s often not the case. There are many simple and inexpensive techniques that can greatly improve energy efficiency, he said, such as using caulk or spray foam to seal leaks around windows and doors. While people often think they’ll be encouraged to purchase the most expensive new windows, buying new windows is most often not necessary, unless a house has only the old, single-pane variety, Rudolf said.

The men also see their role as educating their customers, offering simple information that may add to energy savings, such as the fact that setting the thermostat back one degree will save 3 percent of utilities cost.

And while netØhome does not have the capacity to make the changes that its auditors will recommend, the owners are currently working to build relationships with local contractors who will do so. Ultimately, Brecha and Rudolf hope their business helps the local economy by adding to these local builders’ clientele.

While they hope to not lose money on their new venture, making money isn’t the goal, according to Brecha and Rudolf, who both have day jobs and plan to keep them. Rather, the goal is to both help villagers learn about energy conservation and help the village reduce its carbon footprint. No one else in town was offering this service, and the two men felt it was needed, so they decided to do it themselves.

“We’re trying to do something positive,” Brecha said.

Starting netØhome is only the latest way that a passion for energy conservation has taken over his life, according to Brecha. A professor of physics at the University of Dayton, Brecha for the past five years focused his teaching and research on the environment and energy issues. He also served on the Village’s Electric Task Force, which recently provided the Village with a list of energy conservation-related recommendations. Brecha became interested in home energy use when he and his wife, Katharina Seidl, worked with Andy and Beth Holyoke to build a passive solar straw bale house in town.

And each summer he does research in Germany at the Potsdam Institute for Climate Research. Brecha is considered a national authority on energy-related issues, and as such he speaks all over the country at conferences on sustainability and the environment, according to Pat Murphy of Community Solutions, who served with Brecha on the Village task force.

“It consumes everything I do,” Brecha said of his interest in environmental sustainability.

Brecha met Rudolf when Brecha was installing a solar hot water system in his straw bale house and Rudolf became interested. The two men decided to join forces in the new business, with Brecha as president and Rudolf, who has previously started two small businesses, as chief operating officer.

“I bring to the table an interest in the subject and experience in making a small business work,” Rudolf said.

Also involved in netØhome is investor Kathleen Boutis, who is the president of the Green Environmental Coalition. The new business is also a family affair, with Libby Rudolf providing graphic design and support services.