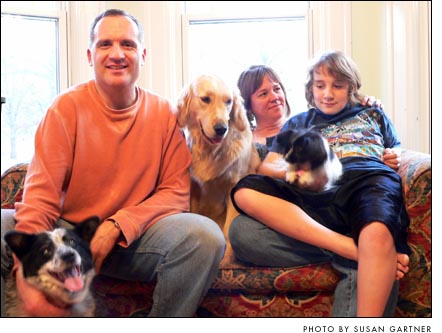 The Gravley-Novellos left the frenetic pace of the Washington, D.C. area and moved to Yellow Springs in July 2008. From left are: Tony, Lori and Connor with their dogs Cody, Olive and Maggie.

Way opening for family in YS

NEW FACES
This is the third in an occasional series of articles profiling individuals and families who recently moved to Yellow Springs.

Four years ago, Tony Novello was a visitor to Ohio, en route to a golf tournament with a colleague from Wright-Patterson Air Force Base. While his friend drove, the Maryland resident took in the sights.

“We ended up driving through this really cool-looking town,” said Novello in a recent interview. “I told my friend, ‘This is a gorgeous town. What is it?’ ”

The memory of that “gorgeous town” remained with Novello and eventually became the catalyst for the Air Force lieutenant colonel to move his family in July 2008 from Spring to Springs — Silver Spring, Maryland to Yellow Springs, Ohio.

“We wanted a slower life,” said his wife, Lori Gravley-Novello, of their decision to leave the Washington, D.C. area that had been their home for eight years. “The pace in D.C. is very frenetic. I just didn’t want to live that way anymore.”

At the time, Gravley-Novello, an artist and writer, was teaching at Sandy Spring Friends School in Maryland, a small, private, pre-kindergarten through 12 college-preparatory school based on Quaker values. Their youngest son, Connor, was also attending the school.

“We wanted small schools but good schools,” she said, explaining the criteria that a new town would have to meet and the research and consideration that preceded the move. “I taught at a great private school but it was an all-consuming activity. There wasn’t time to do anything else. We wanted a community of artists. We wanted good access to natural areas and hiking and a good library system.”

They also wanted a place with an unprogrammed Quaker meeting, the type of silent Quaker meeting during which attenders speak when they feel moved to do so.

“That’s what we’re used to,” said Gravley-Novello, who is doubly grateful to the Yellow Springs Society of Friends (who meet in Rockford Chapel on the Antioch College campus) for being so conveniently located and following the unprogrammed meeting tradition.

When the couple came to town for a house-hunting trip in the spring of 2008, they discovered even more appealing features.

“There was the Dharma Center and yoga [at Yoga Springs],” said Novello, “and four bookstores and three coffee shops in a town of 3,000 people!” added his wife. “We said, ‘Okay, this is the place for us!’”

The weekend the family moved in, they checked out the Farmer’s Market. Soon afterwards, Novello took up with a neighborhood drumming group and in December Gravley-Novello exhibited 20 of her art quilts at Sunrise Café. She also attended the community meeting in October to protest tire burning at the Cemex cement plant in Fairborn.

“It was amazing to me,” she said. “[The meeting] was packed and people asked really thoughtful questions. They were informed.”

The couple’s oldest son, Marshall, is 20 years old and currently living in New Zealand, working on an organic farm and in a wine factory. Twelve-year-old Connor, who attends Summit Academy in Xenia, had his own criteria for what he was looking for in a new community.

“I like that there’s a lot of kids and I have the freedom to walk around,” he said. “I can go practically anywhere by myself.”

Although the 543-acre Sligo Creek Parkway was located only two-and-a-half blocks from their home in Silver Spring, Connor wasn’t allowed to go to the park by himself or even with friends.

“It wasn’t safe,” said Gravley-Novello. “He had a one-block radius where he could explore. Here he’s allowed to go to the grocery store for me and ride to a friend’s house on his bike.”

“I like that there’s a lot of eco-crazy people here,” added Connor. “I like that it’s a small town and how there’s no fast food restaurants except for Subway.” A member of Yellow Springs Boy Scout Troop 78, Connor also likes to hang out at Super Fly Comics and play soccer at Gaunt Park.

It was Novello’s fateful trip through town four years ago that started things in motion. Once a new position for him was secured at Wright-Patterson, momentum picked up quickly. Their Silver Spring home sold the first week it was on the market.

“In Quakerism we talk about the ‘way opening,’ ” said Gravley-Novello. “It’s the notion that if you’re moving in the right direction, then things open for you. I felt like a lot of the experience of moving here was ‘way opening.’”