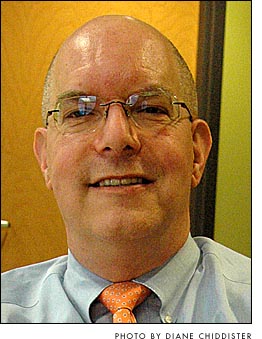 Dr. Michael Fishbein will pursue several goals when he begins his job as president of Antioch University McGregor this summer. He hopes to offer more diversified programs, strengthen the school’s sense of community and make clear to the wider world the uniqueness of McGregor’s mission.

That uniqueness is what attracted him to the job, Fishbein said in a recent interview.

“I wanted to take on the leadership of an institution whose values I share, and for me the notion of social justice is very important,” he said. “At the end of the day, it’s about making certain you’re leaving the world a better place.”

On July 1 Fishbein will take on the job formerly held by Barbara Gellman-Danley, who resigned last summer. A search committee announced in March that Fishbein, who is currently provost at Daniel Webster College in Nashua, N.H., had been chosen to lead the school. He was not available for an interview at that time, but recently spent several days in town.

As well as being attracted by its values, Fishbein was also attracted by McGregor’s small size, he said. McGregor has about 700 students, in both undergraduate completion and graduate programs.

“I’m a people person,” he said. “The idea of working at a large university where there are layers between myself and students and faculty was not interesting.”

One of his first priorities will be getting to know faculty, staff and students, and working to help the school, which has been without a president for a year, strengthen its sense of community.

“We need to be aware of who we are and where we’re going,” Fishbein said, adding that all faculty and staff need to “have a sense that you play an important role in the whole, that you’re all working together.”

That sense of unity is especially critical in difficult economic times, according to Fishbein.

“We have many challenges to face. It’s best if we face them together,” he said.

One of the greatest challenges is trying to make McGregor remain viable during the current recession, which, Fishbein said, is “testing the wisdom of educational institutions being counter-cyclical,” that is, prospering during economic downturns. While the difficult economy has been a boon to community colleges, many of which have seen 10 percent enrollment increases, many liberal arts schools, which tend to be more expensive, have seen enrollment declines. Enrollment at McGregor has been basically stable, Fishbein said, although he would like to see “modest growth.”

“We need to fill out our portfolio,” Fishbein said. “There is more we could be doing.”

It’s too soon to say exactly which new programs, Fishbein said, although he offered as examples those that align with traditional Antioch University values, such as environmental sustainability.

One program Fishbein is sure he will not introduce to McGregor is homeland security. At Daniel Webster, which specialized in aviation studies, he was the architect of a new program in homeland security, which received considerable media attention. The program was often misunderstood, he said, and critics didn’t realize that it sought to increase students’ understanding of belief systems that were alien to their own.

Regardless, “I believe that program was right for that institution, but Antioch McGregor is a different institution with a different mission,” he said. Asked if he would consider offering the program here, he said, “My answer is an unequivocal no.”

The school also will not hire new faculty immediately, according to Fishbein, who said the current hiring freeze remains in effect.

Helping McGregor remain viable will also require taking a look at how the coursework is delivered to students, and making programs as student-friendly as possible, Fishbein believes.

“For higher education to serve its historic mission, it has to adapt to the needs of students,” he said. Because students tend to lead busy lives, he hopes to shape McGregor programs to disrupt their lives as little as possible. For one thing, that may mean “hybrid forms of learning,” that may incorporate more distance learning, although Fishbein prefers the term “technology-mediated education.”

Already several current McGregor programs involve distance learning, although all have some residency requirement. In considering new programs, Fishbein said, he will ask, “where is residency critical to the program, where is it desirable and where would it be disruptive?”

For instance, he said, residency requirements would be disruptive if the school seeks to attract students from “China or Chile.” In those cases, McGregor may consider sending teachers to the students rather than vice versa, he said.

Keeping McGregor viable will also mean making sure that students understand the school’s uniqueness. That uniqueness includes its commitment to social justice and to the principles of Horace Mann, its tradition of blending academics and real-world experience and its small size, he said.

“Being able to communicate how students will benefit from coming here, we’ll find a way to stand out,” he said.

Recently, Fishbein and his wife, Mary Ann Oppenheimer, purchased a home in Beavercreek. They chose that location because he likes to have driving time at the beginning and ending of the day to reflect, Fishbein said, and also because Oppenheimer, who works with non-profit development, might have easier commutes if she secures a job in a regional city. However, he said, he has every intention of committing himself to the Yellow Springs community.

“I fully understand that in accepting the presidency, I was accepting a role in being part of the life of Yellow Springs,” he said. “People will see me in the community. I hope to involve myself in the community to the extent it’s appreciated.”

Overall, he said, Yellow Springs and McGregor have many reasons to work together.

“I look forward to engaging with the community,” he said. “I’d like to see Antioch McGregor and Yellow Springs succeed together.”