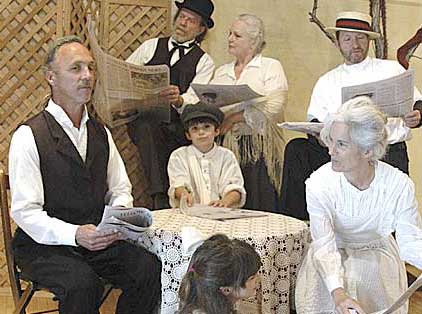 Mad River Theater will present Off the Press, an original play about the role of the Yellow Springs News in the village, from June 5–7 at the First Presbyterian Church. Featured are, clockwise from left, Rick Walkey, Doug Hinkley, Flo Lorenz, Howard Shook, Ali Thomas and Charlotte Walkey. At the table is Lucas Hudson-Groves.

The ‘News’ off the page, on the stage

These are the things that a very local Mad River Theater Works crew found as they were creating Off the Press, a Yellow Springs play of the people and for the people about the role of a community newspaper. The production features a newspaper man to narrate, a bench Buddha and a family that enlivens the Yellow Springs News’ 129 years of coverage of the village. Shows take place on Friday and Saturday, June 5 and 6, at 8 p.m., and Sunday, June 7, at 3 p.m. at the First Presbyterian Church.

Yellow Springs native Holly Hudson conceived the play from an artist-in-residence workshop that Mad River Theater led at Mills Lawn School in February. Hudson, who is Mad River’s development director, producing director Margaret Piatt and musical director Bob Lucas worked with students to explore the purpose and meaning of a local newspaper. The students focused on two local issues, the Gegner barbershop struggle around civil rights in the 1960s and the Title IX issue in the 1970s that eventually won girls the right to play on a boys basketball team. The students then worked the material into a music and dance performance this month.

But the project wasn’t over. The school residency had been funded in part by the Ohio Arts Council and also by a grant from the Morgan Family Foundation, which extended beyond the scope of the schools and into the community. The Morgan grant also funded the creation of a play.

As the Mad River team and a group of local actors, including Charlotte Walkey and Lucas Hudson-Groves, who performed with the Mills Lawn residency, read aloud the snippets of news, ads, letters and announcements that Hudson had culled from local papers and the News’ 2005 publication Two Hundred Year of Yellow Springs, they began to see patterns. The letters that came in for and against the expansion of the village in the 1950s, repeated themselves in the 1990s, albeit usually by different people. The housing debate that continues today in the paper was an issue in the past for this community, and the same goes for civil liberties, which always have and always will need vigilant protection. And the question that surfaced was, ‘Why do we read newspapers?’ — especially if it’s not to see our mistakes and learn not to repeat them.

“It’s a cycle, and the resolution is that it will continue because this is what life is,” said Ali Thomas, who plays a family member in the show.

The repetition of news content resonated with the group as a representation of the cycle the newspaper goes through every week, and formed the basis for the series of vignettes told in three periods, the early 20th century, the mid-1950s and contemporary times.

In the early 1900s, a group of male students might have performed a cheer for the Antioch College baseball team, an event whose likeness was covered in the Yellow Springs News. Later on in that century, a housewife might have promoted the easy and effective results of using DDT against tiny unwanted houseguests, which was covered in a News ad at that time.

All of these scenes and more sketches became part of the play, which was written by Hudson and directed by Piatt, with music and a theme song called “In Between the Ink and Paper” by Lucas. The players include Doug Hinkley, Lucas Hudson-Groves, Flo Lorenz, Howard Shook, Ali Thomas, Charlotte Walkey and Rick Walkey, with choreography provided by Jill Becker.

Far from being depressingly stuck in the past, the experience of creating the show connected Thomas to those in the past who would have been her “soulmates.” And it reminded Hudson that Yellow Springs has long thrived on discourse and progressive era movements, such as women’s rights, socialism, and protesting the Ku Klux Klan. All of this was a relief for Piatt, who as a younger person in the 60s felt that in order to change anything, her generation had to change everything.

“Yellow Springs has always wanted to change society to make things better for people here, both then and now,” Piatt said. “I find it liberating, and I’m glad to be just part of a long chain.”

In addition to the repeated history, the show’s creators found that the role of the news has shifted over time. The drama-laced fiction sections for the purpose of entertainment are no longer so much a part of today’s papers, and the social sections that kept the whole community up on who went picnicking with whom has been greatly reduced in modern times, Piatt and Thomas said. Also national news and international news that was once covered by the local paper no longer seems necessary when most readers can access up to the minute news on the Web from the comfort of their homes.

Ultimately what the show’s creators mean to communicate is the connectedness that the paper helps provide in a community from person to person and from generation to generation. The paper is the community, and one has to read it regularly to be part of it, Piatt said. From her perspective as a non-Yellow Springs resident, anyone who lives here and doesn’t get the paper is “crazy” because how else would they know what’s going on in town, from the band that’s playing next at the Emporium to the controversy over who controls the Glen or the threat of sprawl or how to provide an equitable education for local youth.

Though Off the Press is a unique project for Mad River Theater, whose mission is largely educational, the theater sees the newspaper project as a potential model for creating more pieces about how particular communities relate to their newspapers, Piatt said. The purpose of a newspaper may be universal, as is reflected in Lucas’ lyrics: