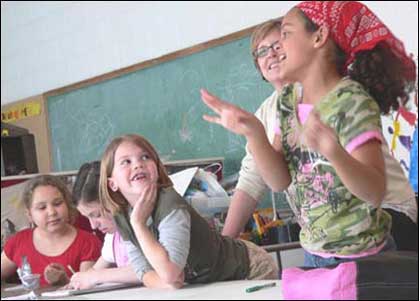 YSKP, the whole year ’round

Even with the loss of its Antioch Theater space last year, YS Kids Playhouse continues to build community through contemporary theater. Displaying its characteristic “the show must go on!” spirit and resourcefulness, the local arts organization has every intention to fulfill its mission of not only providing theater arts and arts education opportunities for Yellow Springs and surrounding communities, but to expand its programming year-round.

“Just because Antioch closed doesn’t mean we can’t keep our vision,” said YSKP Education Coordinator and Affiliate Artist Mary Kay Clark. “It just means we don’t have the space we would like. So we’re making do with what’s available.”

Taking their cue from the fast-paced acrobatic movements of parkour (a dance style featured in this summer’s musical, A Price to Pay: Before Bond Became 007), YSKP has had to learn some fancy footwork to navigate its way around an obstacle course of infrastructure losses, financial disappointments and grant restrictions.

“Once we lost the Antioch Theater, we had to look at what would be the future of YSKP in terms of a home,” said founder and Artistic Director John Fleming. One of the locations being considered was a space at Millworks Business Center with the idea that revenue-generated programming year-round would cover the cost of maintaining the space. When funding to acquire the building did not come through as planned, the decision was made to push on nonetheless with the expansion effort.

“The month-to-month costs would have required exactly the same programming that we’re doing now,” added Managing Director Lisa Hunt.“We were going to have to do this anyway so we thought, why stop?”

As Hunt explained, 70 percent of YSKP’s income is from donations, grants and fundraisers, and 30 percent comes from ticket sales and fees-for-service. The ratio of most youth theater companies and any arts organization that desires long-term viability, she said, is the other way around.

“If you look at other programs and how much they charge for summer arts classes, it’s anywhere from $10–$15 an hour. Ours is more like $1.50 an hour,” Hunt said.

But even the loss of several grants due to statewide budget cuts and foundation portfolio losses has not slowed down YSKP’s momentum. Building partnership and support with the YS Arts Council, Center for the Arts Steering Committee, and Chamber of Commerce, the YSKP 2009 expansion plan will cover a staggering amount of ground.

On March 24, the New Actors Club, led by Clark, debuted with a five-week, after-school workshop held at the First Presbyterian Church for children ages 8–11.

“This workshop is all about process,” said Clark, “It’s teaching them what John Fleming would call ‘page to stage.’ They’re creating the written work on the page that will eventually be produced on the stage and they’re doing everything.”

Using the tales of Beatrix Potter as a model, the 25 participants are learning how to build a character, write dialogue that supports action, stage and direct a production, block a scene and pick out costumes.

“I think it’s an amazing process because now the kids can see the entire workings of a production and they’re in charge,” said Clark. “I’m giving them the tools, now they can take these tools and figure out how to get to the product that they want.”

The twice-a-week rehearsals start with 45 minutes of movement with local choreographer, Sarah Cook.

“The kids are very creative in their movement. They’re very free with their bodies,” said Clark. “As they start staging their productions, Sarah and I are right there to help them translate what they’re doing with her to the movement in their play.”

The New Actors Club is just one in a playground of activities being offered throughout the year at Mills Lawn Elementary School, the Bryan Community Center and the Presbyterian Church. A variety of theater and dance workshops and classes for different age levels, a professional development consultancy series, in-school residencies and an adult/youth holiday production (to provide families with a theater “twist” on the traditional holiday stories) are also scheduled.

YSKP’s summer programming (beginning with auditions May 9) will include theater arts immersion workshops in voice, acting, dramaturgy, and dance. The French-inspired dance style of parkour will be taught by DCDC choreographer William McClellan. Practitioners of parkour try to move as rapidly and as efficiently as they can through a series of obstacles such as branches, rocks, and ledges. A Price to Pay (July 9–12 and 16–19), will feature kids performing this choreographed style as they move through Antioch Amphitheater seating.

There will be three additional summer immersion workshops as well. YSKP’s guest composer and musical director, Neal Kirkwood from New York, will work with youth from Yellow Springs Community Band and Orchestra to teach specific jazz musician skills as they prepare to perform as the Goldfinger Musical Ensemble. Technical theater immersion led by Yellow Springs resident and former New York stage set production designer Michael Casselli will offer basics of lighting, sound and set. Participants will run technical elements for either the YSKP musical or its August summer play, The Short and Bloody History of Spies.

The third immersion workshop will cover photo and video documentary. Photographs and video footage taken by participants documenting the process of making a play will be used in a handbook currently being written by Hunt and Fleming. The handbook will promote the YSKP method of youth theater development and include a “how to” for creating and producing an original production, connecting youth programming to learning standards and developing community collaborations.

“Even if the kids don’t want to be actors,” said Hunt,“there’s going to be an artistic piece there that they can be a part of.”

In February, Hunt visited several children’s theater companies to investigate how other theater organizations are structured and how they make it work.

“The Children’s Theatre Company in Minneapolis is the biggest children’s theater company in America and they were doing six to eight shows a year,” she explained. “The other two theater companies had their own theater space, studios, classrooms, costume building, storage area, and residencies and they were doing eight shows a year. Gearing up a whole program based on production, production, production is not the model for us. We’re a small community of 3,500 people. To put on a production is very costly. Having smaller projects available to kids that are more education-based is a much better fit for our community and for our values.”

Vaulting, scaling, leaping, and darting their way around the economic recession, YSKP continues to practice versatility and optimism.

“We had a dream of having our own theater and the dream is not dead, but it’s on hold,” said Fleming. “We look at this as an interim time and eventually the cosmos and the community will provide for the YS Kids Playhouse to have a home.”