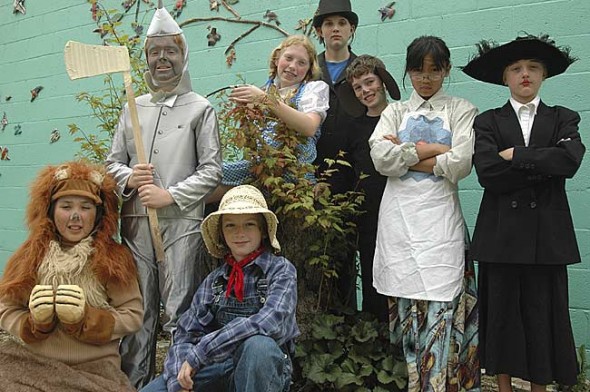 The cast from the Antioch School’s musical production of The Wizard of Oz tried on their costumes for a rehearsal last week. From left, Weymar Osborne as the Lion, Danny Grote as the Tin man, Henry Potts-Rubin as the Scarecrow, Cecila Comerford as Dorothy, Anna Williamson as the Wizard, Landon Rhoads as Toto, Olivia Brintlinger-Conn as Auntie Em and Jorie Seick as Mrs. Gulch. The show opens at the Clifton Opera House on Friday, May 7, at 7 p.m., and shows again on Saturday, May 8, at 2 p.m. (photo by Lauren Heaton)

Anyone who has been alive for longer than five years has likely seen the 1939 film The Wizard of Oz. But far fewer have read The Wonderful Wizard of Oz, the novel published by Frank Baum in 1900, which the Antioch School students say is more complicated and slightly more vicious. The older group students in third through sixth grades will present their own in-between version as their spring musical, titled like the film, on Friday, May 7, at 7 p.m., and Saturday, May 8, at 2 p.m., at the Clifton Opera House.

In the book version, Weymar Osborne said during an interview last week, the tin woodsman uses his ax to chop off the head of a Kalidah. And the poppies speak a lulling poem, “Come rest your heads on our petals of red, Sweet dreams will be yours…” according to Cecila Comerford, who plays Dorothy.

“If you’ve read the book,” according to Landon Rhoads, who plays Toto, “it’s totally different,” than the movie.

But as in the movie and the Antioch School’s play, Dorothy sings “Somewhere Over the Rainbow,” as the prelude to an adventure she takes with the Scarecrow, played by Henry Potts-Rubin, the Tin man, played by Danny Grote, and the Lion, played by Osborne, to find the various things they each feel is missing from their lives.

When the tin man meets Dorothy he doesn’t have a heart, Grote said.

“Well, he sort of does have a heart, but he doesn’t know it,” Comerford added.

And the lion doesn’t have enough courage, according to Osborne. “I already have stage fright so I don’t have to act out his fear,” he said.

And the stumbling, bumbling scarecrow doesn’t have a brain, said Potts-Rubin, who plays him.

“The irony of it all is that he’s the one who comes up with all the plans,” including the scheme to save Dorothy from the Wicked Witch of the West, Potts-Rubin said. And in the end, Osborne said, the “wizard convinces us we always had the things we thought were missing from the beginning.”

Baum’s story has many “loopholes,” as Osborne sees it, including a scarecrow without a brain who can actually walk and talk. But he has thoroughly enjoyed helping to create their own show by editing their script, making their costumes and props, and spending many hours in the shop designing and making their own set. Grote made his ax out of wood, cardboard and paint. And the students are very enthusiastic about the fruits of their labor.

“Anyone who enjoys musicals, I suggest they come to this,” Rhoads said.

The older group chose The Wizard of Oz because of its dramatic plot and interesting characters, such as Mrs. Gulch and Toto, said Jorie Seick, who plays her Mrs. Gulch with bright red lipstick. “Something you don’t see every day is a cyclone that carries a house away.”

“And the third graders will be walking around dressed as munchkins — who doesn’t like to see that?” Osborne said.

The most difficult part of the production was memorizing the lines, said Anna Williamson, who plays the Wizard. And learning how to sing the high notes from singing coach Beverly Logan took quite a bit of work, Comerford said. But getting a chance to scold people as Auntie Em was worth the work, according to Olivia Brintlinger-Conn. And above all, according to Comerford, the students ultimately like the fact that they are getting a chance to be on stage, in the spotlight, for their very own chance to shine.