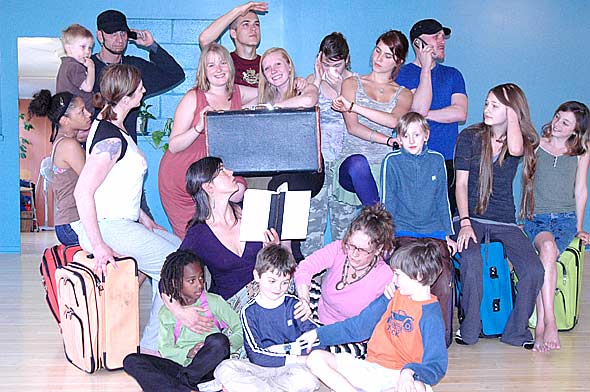 This weekend’s Community Dance Concert, to take place at the Antioch College south gym, will feature a wide array of villagers, including those in the photo. In the back row, from left, are Curtis Bliss, holding his son, Braiden, Stefan Turner, Amanda Hamisch and Brendan Sheehan. In the second row, from left, are Kristen Foster and Elizabeth Lutz (seated on suitcases), Amelia Tarpey (behind suitcase), Helen Reed, Jade Turner, Lucas Mulhall, Savana Amos and Charlotte Walkey. In the front row are Arielle Johnson, Jennifer Johnson, Liam Lutz, Marta Mari-Crocker and Aidan Lutz. (photo by Diane Chiddister)

After nearly a decade of success under the guidance of Valerie Blackwell-Truitt, the Yellow Springs Community Dance Concert has a new face — three new faces, to be exact. When Blackwell-Truitt moved to Colorado last year, friends and fellow dancers Ali Thomas, Marybeth Wolf and Melissa Heston stepped in to keep the annual event from losing its momentum or, perhaps, disappearing altogether. Last week, the women discussed how they came to lead one of the village’s most significant dance showcases.

“Valerie did the last nine shows,” explained Wolf. “She moved out of town and there was not going to be a concert.”

Determined not to let that happen, the three decided to jointly produce the show. The program will include familiar faces from the village, including Soul Fire Tribe, Egyptian Breeze, Amelia Tarpey, Tricia Gelmini and Valerie Blackwell-Truitt, who will make a special trip back to participate. The concert will be held in Antioch College’s south gym at 8 p.m. April 16–17. Admission is $8 for adults, $5 for students and seniors.

Dance styles will range from post-modern to hip-hop, with live drumming and a Michael Jackson tribute choreographed by Wolf’s daughter, Jade Turner, who is 16. Turner has been active in the concert since she was 7 and is an example of concert organizers’ goal to feature dancers of various ages and backgrounds.

“Usually in professionally curated shows, you don’t see a budding artist next to a seasoned professional,” Heston said.

Heston, herself one of the seasoned professionals in the show, has been a dance instructor at several area colleges and universities including Antioch, Wright State and Earlham. And Wolf first became a fixture in the local dance community 15 years ago when she first began signing up for workshops offered through Antioch’s dance department.

As well as originating the concert, Blackwell-Truitt created the Moving Arts Studio. What started in that space has had a lasting impact on both the concert and the community as a whole, the women said.

“It was pretty integral to movement in the community in addition to Antioch College,” said Heston. “If you wanted to move, you would either go there or out in the street.”

Without the studio, the community dance concert performers regularly used Antioch College campus facilities, specifically the south gym, as both a performance and rehearsal space during the weeks leading up to each show. The closing of the college had a significant impact on the group, forcing them to gravitate toward places that were not always adequate for their purposes.

“The whole space thing is a real concern because we don’t have a studio,” Heston said. “We as dancers in the community have few spaces to rehearse and perform in and a lot of times we rehearse in spaces that are really not good for our bodies — cement floors.”

In fact, the women had originally planned to hold the concert at the Bryan Community Center, although they were concerned that the lighting was not appropriate for the performance. Fortunately, a conversation between Thomas and Jerome Borchers opened up another opportunity. As chairman of the steering committee for the Yellow Springs Center for the Arts, Borchers had frequently talked to Antioch’s interim president, Matthew Derr, and chief financial officer, Thomas Brookey, about renewing the college’s involvement with community arts groups and he believed that the dance concert presented such an opportunity. He took it upon himself to call Derr and Brookey to discuss securing a campus venue.

Shortly afterward, the dancers were notified that they would be able to use the south gym. For them it was a homecoming, but they found that the gym was not quite in the state that they remembered. The sound system had not been used since the building’s doors closed in 2008. College staff members quickly worked to get it back into shape.

“To us, it represents a real willingness to work with people in the town and in the arts community,” Thomas said.

Eventually, the community dance group hopes to make the new Yellow Springs Center for the Arts their new home. YSCA relinquished an option to purchase property valued at $4 million on the corner of Dayton and Railroad Streets in March, but Borchers said that YSCA is exploring the possibility of using space on the college campus.

“One space we’re looking at is the south gym,” he said. “If things fall into place we may be moving things forward.”