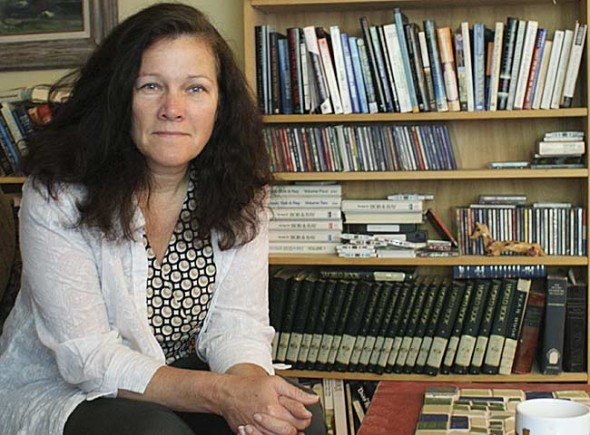 Local author Rebecca Morean will read from her novel, In the Dead of Winter, on Tuesday, May 4, at 6:30 p.m. at the Yellow Springs public library. (Photo by Megan Bachman)

When local author Rebecca Morean wrote her novel In the Dead of Winter, a mystery starring the illegitimate daughter of Sherlock Holmes, she was trying to pull one over on her audience. The book, allegedly a manuscript discovered by author Abbey Pen Baker that was written by Baker’s great aunt, was a clever take on Sir Arthur Conan Doyle’s proclamation that a real Dr. Watson had handed him the Sherlock Holmes manuscripts.

“It’s a layered conceit,” Morean said, and though it appears that Abbey Pen Baker merely is editing her great aunt’s unpublished manuscripts and out-of-print books, “it’s not true.” Really, Abbey Pen Baker wrote them. And really, she is Rebecca Morean.

Morean will play the part of Abbey Pen Baker while she reads from In the Dead of Winter on Tuesday, May 4 at 6:30 p.m. at the Yellow Springs branch of the Greene County Public Library. The event, titled “Unveiled: The Daughter of Sherlock Holmes,” is free and open to the public.

Originally printed in 1994, In the Dead of Winter has been recently republished by UK publisher Irregular Special Press in anticipation of the release of Morean’s second novel of the series, Death at the Round Table, this fall. In the Dead of Winter is the book that is launching the series, and Morean hopes to complete the third book by January, with a new one each year thereafter.

While writing now comes easily to Morean, it didn’t always. As a single mother of four, when she first moved to town in 2005 she home-schooled her two sons and two daughters during the day and wrote grants at night, completing 32 government grants in one year.

“I wasn’t doing any writing at all,” she said.

Then a series of events led Morean back to her fiction writing. “I followed my bliss, and it just kept opening all of these doors,” she said. Local author Ralph Keyes’ book The Courage to Write, was one inspiration. Joining the board of the Antioch Writers’ Workshop to help workshop leaders with grantwriting was another.

She went on to land a job teaching creative writing at Antioch College. The holder of a masters of arts with an emphasis in creative writing from Stony Brook University in New York, she now teaches at Sinclair Community College in Dayton and Wright State University, in addition to writing every day.

Morean was drawn to Yellow Springs because of its walkability and abundant green space, which reminded her of towns in Vermont, where she lived for 17 years. At a friend’s recommendation she came to Yellow Springs, which she found was the perfect place for her multiracial family.

Now feeling at home in Yellow Springs, Morean’s new series is garnering much praise by mystery and Sherlock Holmes fans alike. New York Times best-selling author Sena Jeter Naslund wrote that In the Dead of Winter has “an exciting plot, a refreshing main character and a precise and evocative language.”

Taking place in 1918, the book traces the exploits of detective Myrl Adler Norton, the daughter of Sherlock Holmes, and her faithful female sidekick, Faye Martin Tullis, as they investigate the murder of an actress and uncover the truth about Norton’s real father, Sherlock Holmes.

Morean got the idea after reading Doyle’s A Scandal in Bohemia, where the character Irene Adler, an American opera singer, is described as “the woman” by Watson, alluding to a possible relationship with Holmes. Piecing together the mystery of their relationship, Morean found other clues that they may have been romantically involved. She went on to suppose that they had a child, Myrl Adler Norton, who would become a brilliant detective in her own right.

“I played with the idea that she had a mind like Holmes but with a female sensibility,” Morean said of the Myrl Adler Norton character, who teaches logic at Smith College.

The book starts out as an Emma Goldman rally is taking place at Smith College and explores the prejudice against women throughout, Morean said. As Morean (under her Baker pen name) writes in the book’s editor’s note, “they were two phenomenal women when phenomenal women were trapped in a vacuum, without the support of the past and with a vaporous future.”

As Abbey Pen Baker, Morean spins a conceit so believable, readers have been calling used bookstores to find the other published works of Faye Martin Tullis, Baker’s fictitious great aunt. As Rebecca Morean, she writes literary fiction for adults and young adults as well as short stories, which have been published in literary journals.

“I really want people to read my work,” she said, adding that with this series she hopes to build a small but dedicated following.

If the success of In the Dead of Winter in the mid 1990s is any indication, Morean will be well on her way. It was then that the manuscript sold to a publisher almost immediately and Morean made her way around New England on a book tour.

“I had this mini-blip when suddenly things started happening,” she said.

But for now, she’ll continue teaching college courses from composition and creative writing to Shakespeare as well as doing book readings, panel discussions and workshops around the country.

Local aspiring writers may be interested to hear Morean at this summer’s Antioch Writers’ Workshop, where she’ll participate in a “Focus on Form” panel on the craft of fiction as well as run a Saturday a la carte session entitled “Awakening the Writer Within,” which can be attended by those not able to participate in the entire week-long workshop.