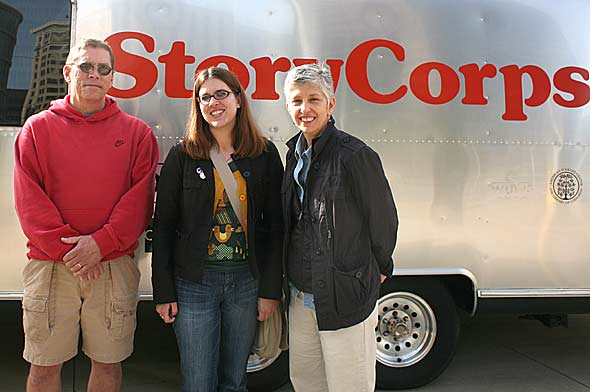 Three WYSO Public Radio employees greeted the StoryCorps mobile booth when it arrived in Dayton on Monday, April 19. Shown are Peter Hayes, director of operations, Julietta Fromholtz, Webmaster and Neenah Ellis, station manager. The StoryCorps mobile booth, which is being sponsored by WYSO, will be parked in front of the Schuster Center in downtown Dayton from April 22 to May 15, as part of a nationwide project to collect oral history.

When Neenah Ellis was growing up in northern Indiana, she regularly listened to Studs Terkel interview guests on Chicago radio. The legendary oral historian became an inspiration and role model, according to Ellis, who is now general manager of WYSO Public Radio.

“I admired him for his humanity, his belief that everyone has a story,” Ellis said in an interview this week. “He had a way of getting people to open up, of getting them to share their deepest stories.”

Perhaps it’s no surprise that Ellis aspires to do the same at WYSO. More than anything, she said, she wants to bring the voices of local people to the station.

“They could be first-person narratives, essays, people interviewing each other,” she said. “I don’t want to define what it is. I want others to come forward.”

Ellis has found at least one way of following in Terkel’s steps, when WYSO this week begins a three-week stint hosting StoryCorps, a national nonprofit group dedicated to recording, preserving and sharing the stories of ordinary Americans. The StoryCorp Mobile Booth, an Airstream trailor, will park from April 22 to May 15 in front of the Schuster Center in downtown Dayton.

While parked there, people who have signed up for interviews — pairs of people will interview each other — will spend about an hour in conversation, while being recorded. StoryCorps employees make two CDs of the event, one to give to the participants and the other to be archived in the Folk Life Center of the Library of Congress.

While most of the interview slots are taken, a few have been held and are still available, Ellis said. Interested persons or groups should call 800-850-4406 at 10 a.m. on Friday, April 23, to get a slot. Out of more than 130 interviews that will take place in Dayton, Yellow Springers have snagged 14 slots, including representatives from Mills Lawn School, Nonstop, the Unitarians, filmmakers Steve Bognar and Julia Reichert, storytellers Jonatha and Harold Wright, and Antioch College archivist Scott Sanders. Participants are free to discuss the topic of their choosing, although suggested questions will be provided.

Ellis plans to use some of the local interviews in WYSO programming.

Founded in 2003 by another Studs Terkel protégé, Dave Isay, StoryCorps has crisscrossed the country, and accumulated about 50,000 stories, the largest collection of oral history in the country. Excerpts from the interviews are heard on National Public Radio each Friday during “Morning Edition.”

“StoryCorps tells the true American story — that we are a people defined by small acts of courage, kindness and heroism. Each interview reminds people that their lives matter and will not be forgotten,” Isay said in a press release.

The idea for WYSO’s involvement came from villager Linda Sikes, according to Ellis, who about a year ago got a call from Sikes, whose family had taken part, to tell her about the project.

“Literally, the next day I called and said, what does it take to sign up?” Ellis said. She got on the mobile booth’s schedule, and a year later, StoryCorps arrived.

StoryCorps is one aspect of a three-pronged approach to oral history that Ellis foresees for WYSO. In her first year on the job, the station has also received a $100,000 grant from the Corporation for Public Broadcasting, or CPB, to digitize the 3,000 audio tapes that have accumulated since the station’s beginning in the late 1950s. The CPB project focused on tapes about World War II and civil rights, and WYSO was chosen partly due to its rich civil rights archives, including speeches by Dr. Martin Luther King, whose wife, Coretta Scott King, graduated from Antioch.

The audio tapes had been neglected and were simply stuck in boxes and plastic bags, Ellis said. With the help of the grant, the station hired Greene County Library archivist Deanna Ulvestad, who is archiving the collection. Ellis hopes that the audio collection will be available to the public later this year, she said.

The grant has also helped the station launch a new program aimed at preserving local oral history, to be developed by McGregor graduate student Brooke Bryan, who will work part-time at the station.

Add to that the recent award nominations by the Ohio Associated Press for WYSO’s series last winter on the regional mortgage crisis, the 1,500 new members who joined this year and the balanced budget, and it’s been a very good first year, Ellis said.

“This year has been incredibly exciting. I’ve had nothing but open arms everywhere I’ve gone,” she said.

Many people in the region seemed to have been waiting to come back to the station after several years of turmoil earlier in the decade, when a former manager replaced local volunteer-hosted shows with national programs, and much local support dissipated. But things have been on the mend for the past several years, and Ellis credits her predecessor, Paul Maassen, with “putting the train back on the tracks” at the station. WYSO faced huge technical challenges when Maassen arrived, she said, and he got things up and running again, freeing her to work on new programming.

“We’re laying the groundwork,” she said. “We want to build WYSO sustainably.”