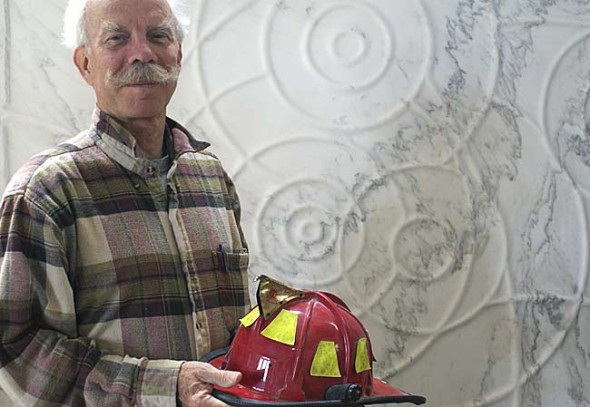 Local sculptor Jon Hudson recently completed a public sculpture, “Fire Wall,” which honors fallen firefighters and will be constructed at Leonard E. Stubbs Memorial Park in Centerville. A fundraiser for the group financing the effort, the Miami Valley Firefighter/EMS Memorial Association, will take place this Saturday, May 8, at Gilly’s in Dayton.

Local sculptor Jon Barlow Hudson has created public art for more than 30 years, his works of swirling stone and steel spread around the globe. But his latest design for a public sculpture is unlike any before  — honoring those who died fighting fires and saving lives.

His planned tribute to the Miami Valley firefighters and paramedics who have fallen in the line of duty is a sculpture he calls Fire Wall. The Miami Valley Firefighter/EMS Memorial Association, the sculpture’s sponsor, has been raising money for the project for about 18 years.

The organization’s latest fundraiser, a concert in downtown Dayton featuring the rock and roll band Sky Kings will take place May 8 at 8 p.m. at Gilly’s, at 132 South Jefferson Street. Admission is $5 and all proceeds will go to support the association, which is $18,000 shy of meeting its $100,000 goal for the project.

An association selection committee chose Hudson’s design from among 40 entries in a statewide competition.

“His design brought this whole emotional factor that stunned everyone on the committee,” said Steve King, secretary of the seven-member selection committee and a Sky Kings band member.

Walk into Fire Wall, after it is built at Leonard E. Stubbs Memorial Park in Centerville, and you’ll be surrounded by three red steel triangles reminiscent of giant bonfires. The largest features a life-size cutout of a fallen firefighter, its silhouette standing behind the wall.

“It looks like someone crossed over to the other dimension, the other side,” King said.

In addition, pikes, axes and various firefighter symbols will adorn the 15-foot triangle with the names inscribed of the 69 firefighters and paramedics in the nine-county area who have given their lives in service since 1847, when Springfield firefighter John Dawson died in the line of duty.

“I wanted to create an environment which is a sacred precinct,” Hudson said. “It’s a unique, colorful and powerful statement.”

Hudson, who proposed a design for the Vietnam Veterans Memorial in Washington, D.C., said he understands the value of public memorials. “It’s a wonderful function for sculpture,” he said.

Selection committee member Jane A. Black said of Hudson’s sculpture: “It has this really reverent, spiritual feel that a memorial should have.”

Black, executive director of Dayton Visual Arts, said that the committee was looking for a piece “that captured the essence of what these people do for our community, but in a way that had true artistic integrity — and that was Jon’s.”

In addition to art professionals, a city planner and a retired fire chief, the selection committee included family members of a deceased firefighter and paramedic, who especially appreciated Hudson’s attempt to convey the visceral feeling of a fire to understand what firefighters do, according to Black.

Retired firefighter and memorial association founder Rod Longpre said, “If you go across the country, nearly every firefighters memorial is a bronze statue of a firefighter holding a child…This will be unique.”

Hudson, a long-time Yellow Springs resident, is internationally known for his public art commissions and has sculptures in 22 countries. In his most recent trip abroad, Hudson unveiled a sculpture in Beijing as part of the China-U.S. Peace & Friendship program. He also participated in a symposium in Abu Dhabi, where he gifted a sculpture to a sheik of the United Arab Emirates’ ruling family.

The memorial’s location is ideal, King said, as the natural amphitheater at Stubbs Park brings more than 16,000 visitors each year for Centerville’s summer concert series. Once Fire Wall is completed, it will be the new site for an annual memorial honoring the departed firefighters and paramedics, which Longpre began organizing not long after his friend and co-worker Lieutenant Pat Yahle was killed in an explosion in Dayton in 1988.

The Miami Valley Firefighter/EMS Memorial Association has hosted fundraising events like the upcoming concert and soliciting donations since it was founded in 1992. Of the $100,000 to be raised, 80 percent will go towards the memorial’s construction, which may begin later this year, while the rest will be used for upkeep.

“It’s very exciting that we’re almost there,” said Longpre, who plays bass for the Sky Kings.

Hudson said that each public commission presents a different challenge as he combines his own vision with the act of “designing a piece for a place in the public where many will see it hopefully for a long time.”

“I cast around for what represented the community,” Hudson said. “I realized that we’re a tree community and that we have so many writers and people involved in education.” The result was a stylized tree made of a spiraling vortex of books.

“Plus books depend on trees,” he said.

The Tree of Knowledge is typical of Hudson’s works, inspired by the principles of centeredness and balance he learned practicing the Chinese martial art of Tai Chi in the early 1970s.

“Virtually all my work has a central point, an axis,” he said. “Before my work was linear.”

Hudson began sculpting at the Dayton Art Institute in the late 1960s. After studying in Europe, receiving his masters of fine arts from the California Institute of the Arts and working for two years in a gold mine in the Sierra Nevada mountains, he came to Yellow Springs, first renting studio space at the Unitarian Universalist Church.

Hudson’s first public commission came in 1979 from Miami-Dade County in Florida. Now, 30 years and dozens of installations later, from his studio on Fairfield Pike in Yellow Springs, he scours the Internet for potential competitions, such as the firefighters’ memorial.

But this time, Hudson is contributing more than an innovative and evocative design. According to King, Hudson is completing the sculpture for far less than he typically receives for such large-scale commissions.

For his role as a sculptor and a contributor, Hudson will be recognized at Saturday’s concert.