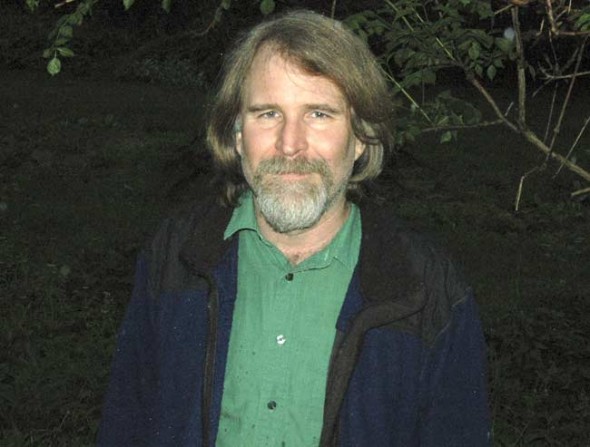 David Montgomery spoke as part of the Tecumseh Land Trust's "Stories of People and the Land" series on the crisis of soil depletion. (Photo by Megan Bachman)

Professor and author David Montgomery thinks everyone should be concerned about where their food comes from and how it’s grown.

In his presentation for the Tecumseh Land Trust’s “Stories of People and the Land” series given at Wright State University on Tuesday night, the soil expert urged no-till, organic farming practices that preserve local agricultural soils rather than deplete them.

“We are depleting the soil 10 to 20 times faster than it is being produced,” said Montgomery, a professor of geomorphology at the University of Washington and author of Dirt: The Erosion of Civilization.

“We only have three inches of topsoil in the area,” said Krista Magaw, executive director of the Tecumseh Land Trust. “That’s not much, and we shouldn’t mess with it,” she added.

The series is part of the land trust’s 20th anniversary celebration and a way to educate the public as well as the land trust on better conservation practices, Magaw said.

Each year, local farms with an easement are monitored for water quality, soil erosion, nutrient management and other conservation measures. But the first step is farmland preservation, Magaw said.

“We need every acre of farmland to feed the population,” Montgomery said. “Every acre put under pavement is taking food out of the mouths of future generations.”

Montgomery argues that our present crisis goes back to the introduction of the plow into agriculture, which he calls the most destructive device ever invented.

No-till farming, where the soil is not tilled before planting, is an important way to reduce soil erosion, Montgomery said. But, he explained, it should be used with organic farming, or farming without the use of synthetic pesticides and fertilizers, to preserve soil fertility.

Montgomery also advises returning organic matter to the soil, which can create soil 10 times faster than it can be produced by nature. Though this may be challenging on large, mechanized farms, everyone can begin at home.

“You can influence your own bits of land in your yard or garden,” Montgomery said. “It’s amazing how fast people can make good soil.”

During the upcoming “Yellow Springs Experience” weekend, July 9-18, the Tecumseh Land Trust will organize a farm tour to showcase local farms and gardens which demonstrate these sustainable practices.

In the meantime, the land trust will continue its mission, which is, according to Magaw, “to preserve agricultural soils to feed people in the future.”

This echoes Montgomery’s simple message. “We need to take care of the land so it takes care of us,” he said.