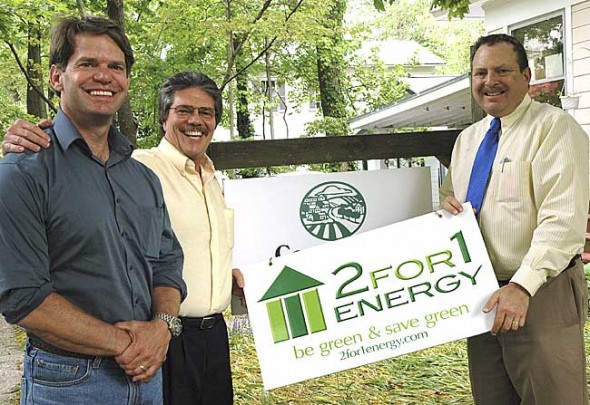 Local residents Dan Rudolf, at left, and Bob Brecha (not pictured) have joined with business partners Dan Swank, center, and Lieb Lurie, right, to start 2 for 1 Energy, a one-stop energy audit and home retrofit business in the village.

2 For 1 business reduces energy use

Trying to change the mindset of the masses is a mass production job — at least that’s how the new business 2 For 1 Energy is approaching the task. The object: getting residents to pay to retrofit their homes for greater energy efficiency. The product: a process designed to achieve base line energy efficiency for almost any home at a cost between $1,500 and $5,000. The intended result: a starting base of residents who have reduced their home energy consumption, recouped some or all of the cost through reduced energy bills and spread the word that a home retrofit is the right thing to do for both the pocketbook and the planet.

Behind the business is a group of Yellow Springs residents who have been mapping the energy crisis and looking for solutions to curb public consumption for many years. Bob Brecha, who researches energy solutions at the University of Dayton and started the home energy auditing business NetØHome last year with local engineer Dan Rudolf, have partnered on the business end with Dayton area entrepreneurs Lieb Lurie and Dan Swank to get 2 For 1 Energy off its feet. Then to give it a boost, the business partnered with the Village and Community Solutions to apply for a $1–$5 million stimulus grant to develop their retrofit plan. They expect to hear the decision about the stimulus funds sometime this summer.

The premise of 2 For 1 Energy is that it’s a one-size-fits-all remodeling process. The simplified solution allows for a reduction in the implementation cost, which means that more people will be able and willing to remodel, Rudolf said in an interview last month.

In the past year NetØHome has audited about 75 homes in the village, but only 10 to 15 percent of those audited ended up executing the recommended retrofits to solve the energy leaks and high consumption problems in their homes, Rudolf said. Yet the energy leaks in the NetØHomes were real, and many of the problems were common to all the homes the auditor tested. According to NetØHome statistics, the top three energy sinks that don’t cost much to fix are, 1) air sealing, 2) insulation and attic hatch sealing, 3) compact fluorescent light bulbs. (Windows fall just behind insulation in terms of energy leaks, but they are pricey to replace.)

While these things are relatively inexpensive to fix, making the connection between getting the audit and engaging a builder who knows how to retrofit for energy efficiency hasn’t seemed to happen. Lurie attributes the lack of follow-through partly to the unaffordable estimates for individual retrofits, which usually total upward of $12,000, he said. Even if the retrofit could save a homeowner $600 per year in heating and electric bills, it would still take 20 years to realize the savings, and the homeowner would still have to come up with a pile of cash or get a loan to have the work done, he said.

So the group thought if they could train their own builders to go in like a hazmat team, complete an energy audit, follow the recommendations of the audit and complete the highest priority items, the home energy issues could be solved like a one-two punch, a 2 For 1, at a lower cost. The home-owner could choose to complete as many of the retrofit items as they could afford at any given time, and then have more work done later as their budgets allowed.

2 For 1 Energy is initiating a pilot program to retrofit its first 12 homes, most of which are in Yellow Springs and have already had their homes audited by NetØHomes. The first 12 will be offered financing at cost through the business’ area investors. The group has ideas about how to streamline a “typical” retrofit job and save costs, partly by ordering materials in bulk, to keep the job under $5,000 with the goal of getting the process down to a $1,500 science, Rudolf said.

Homeowners often base their decisions of how much to retrofit on the anticipated payback in energy savings. But the equation is skewed in the Midwest because, according to Rudolf, the cost of coal that many use as a heat source has remained low. But with dwindling energy resources and carbon taxes on the horizon, the future cost of heat could rise to the point at which homeowners find that spending money to retrofit is a wise decision not just ethically but also financially, he said.

“The cost of energy is fairly low in the Midwest because there is no hidden cost of coal,” he said. “Our goal later is to return when the prices rise to do the things that didn’t seem as valuable to the customer [now].”

The company also intends to focus on customer education through e-mails, letters and public workshops as a key component of helping people to save energy without spending a lot of money, Rudolf said. Through NetØHomes he knows of homes in the village that operated on half the energy they were using just with a change of ownership, all due to lifestyle choices.

“Habits are an important part of energy usage,” he said.

Ultimately, all of the business partners believe that energy consumption is a global problem that contributes to both environmental degradation and to fighting for scarce resources. Because the scarcity will only continue to get worse, curbing consumption will necessarily become a big part of the answer. That’s the theory on which Pat Murphy at Community Solutions bases his research.

“We send money to Iraq and Afghanistan to buy energy that we blow up a chimney,” Lurie said. “If every home was insulated to the Home Star value, our energy needs could come close to zero.”