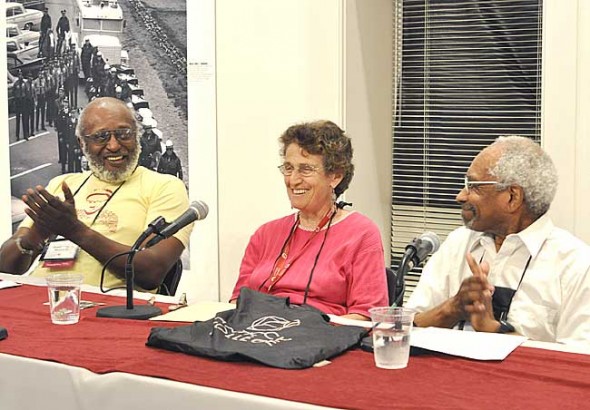 Antioch College alumni Prexy Nesbitt, left, Joni Rabinowitz and Paul Graham took part in a panel discussion on Friday, June 18, on local civil rights actions, with a focus on the effort to desegregate the Gegner barbership in 1964. The reunion’s overall theme was “Race and Social Justice.” (submitted photo by Dennie Eagleson)

A $3 million bequest from the estate of longtime Antioch College faculty member Nolan Miller and his brother Richard Miller will enable Antioch College to financially support its students who wish to work in nonprofit organizations in Yellow Springs, according to Antioch College Interim President Matthew Derr in his State of the College address last Friday, June 18, at the annual college alumni reunion.

“This is a truly transformational gift for the college and its programs and our relationship to the village we call home, and that came to the defense of the college at a time of great need,” Derr stated.

The bequest was made to the Yellow Springs Community Foundation from the Miller estate for the purpose of funding Antioch College students to work in local nonprofits. Nolan Miller, a longtime professor of literature and the fiction editor of The Antioch Review, was known as a mentor of some of the college’s most renowned literary graduates, such as the poet Mark Strand. Nolan Miller died in 2006 and Dick Miller, Nolan’s younger brother, died a year later. Dick Miller was a self-employed artist in several different media who was educated at the Art Student League of New York.

Derr also announced that the college received a challenge gift of $1.5 million from an anonymous donor, who seeks to have that amount doubled for a total of $3 million.

“We hope in the coming months to meet this challenge and to have raised the full $3 million for the cause of restoring this great institution,” Derr said.

Alumni giving to Antioch College has significantly expanded since the Antioch College Continuation Corporation, an alumni group, succeeded in negotiating independence for the college from Antioch University and re-opening the college in September 2009. While about 2 percent of alumni were donating to the college at that time, now 20 percent have made donations, Derr said.

Since September 2009, the college has raised $17 million, according to Derr, who said that the increased percentage of alumni donors is especially important to grant-giving organizations.

In his address, Derr stated that the new college, when it welcomes its first group of students in fall 2011, will “focus on a set of core strengths and competencies,” that reflect traditional Antioch College values.

“What will be true is what has always been true: If you put a group of creative and passionate students in a small room, as we know, it does not need to be heated or look all that great,” he said. “If you put a student in a room with a talented and empowered faculty member, great things happen.”

However, the revived Antioch will also offer a “radically different model of higher education,” according to Derr, with its new calendar that offers students the opportunity to complete their degrees in three years rather than the traditional four or five. Some alumni have expressed concerns about students receiving a quality education in the new model, according to Derr, who emphasized that not all students will be expected to complete their credits in three years. Rather, they will be given a “clear road map,” of how to complete their degree in that time period, along with options for completing a degree in three and a half years, and in four years, so that they can choose a workable model.

The main reason for the new Antioch College calendar is to make a liberal arts education more affordable, Derr said.

During questions to Derr, several alumni expressed concerns about the Antioch College faculty who have not been rehired by the college. Four former faculty are now Morgan Fellows, but many more are still unemployed after the college was closed in July 2008, and the college has not indicated plans to rehire them.

However, according to an alum from the Class of 1986, “If we don’t begin with a commitment to re-hire tenured teachers, then we’re not exhibiting a commitment to social justice.”

The Antioch College pro tempore board has identified the hiring of the new president as its first priority, and the president needs to have the freedom to hire faculty, according to Derr. However, he also stated that the board has a commitment to tenure, and a new president would likely also have such a commitment.

The reunion, which was attended by more than 300 Antioch College graduates from around the country, had a theme of race and social justice. It was the second alumni reunion since the college became an independent liberal arts institution in September 2009, following a year of closure.