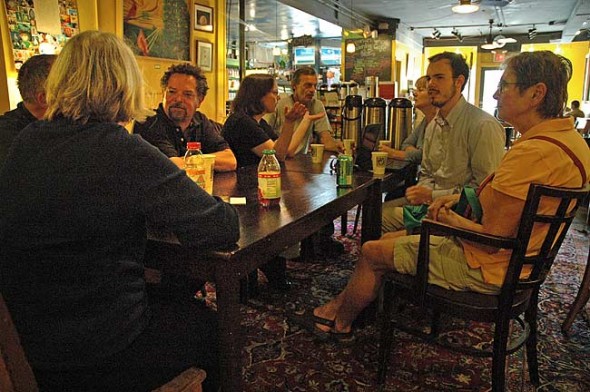 Antioch College staff chatted with community members yesterday at the monthly, "Coffee with the College" discussion, which is free and open to the public. Topics ranged from the College's president search to the upcoming reunion. (Photo by Megan Bachman)

Coffee with the College

To keep the community updated on the progress of Antioch College’s re-opening, the college organized an informal discussion on the second Wednesday of each month at 5 p.m. at the Emporium. Community members can bring their questions, while Antioch provides the coffee.

“Historically the college has not been good at letting people know what they’re up to,” said Susan Eklund-Leen, director of work at the college.

“We’re sharing the good news about the college,” said Julian Sharp, Antioch’s manager of volunteer work. “We want to be accessible to the village of Yellow Springs.”

Topics at yesterday’s “Coffee with the College” discussion included next weekend’s alumni reunion, the progress of building renovations on campus, the accreditation process, the search for a new president, the re-opening of Curl Gym for community use and the new curriculum and co-op program.

Antioch’s co-op program, which has been a distinguishing feature of the college since 1921, will now include on-campus work in addition to off-campus jobs, Eklund-Leen said.

“Work is going to be woven into the fabric of the campus,” said Eklund-Leen. “[Students] are going to be working with their hands, heads and hearts. They will understand the value of all work.”

Potential volunteer opportunities were also discussed at the gathering.

“Volunteers are an integral part to the rebuilding of the college and to its independence,” said Sharp, adding that the largest percentage of non-alumni volunteers come from the village. He said that next week more than 50 volunteers will restore benches, plant flowers and paint over graffiti at the Penell House on the Antioch campus. Other villagers can sign up to help by emailing Sharp at jsharp@antiochcollege.org.