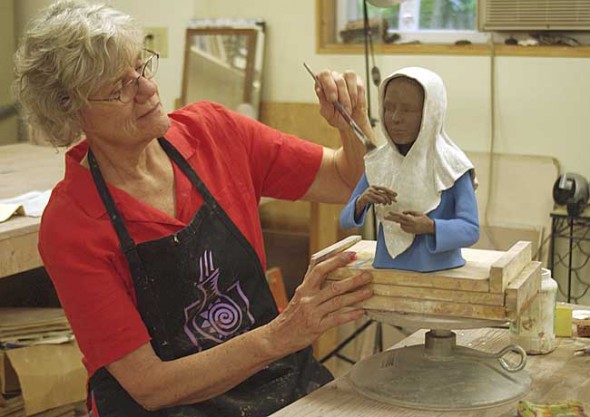 Local sculptor Alice Robrish is shown in her Dayton Street studio, where she’s working on a series of busts of Afghan schoolgirls.

The building on Dayton Street looks like an unassuming garage, set well back from the street. Look closely, though, and you might notice the tables and shelves inside. This is in fact an artist’s studio, converted from a garage to a work space by local sculptor Alice Robrish.

On a gray, muggy morning in June the space is brightly lit and cool, populated with tables and racks, one kiln, a spray booth under construction, a sink and desk. The figure of a Buddhist monk with flowing robes, one of Robrish’s recent works, stands nearby, and a life-size bust of her granddaughter currently in progress lies on a low table.

Robrish sculpts primarily in clay. She discovered her enjoyment of clay sculpting early on, while growing up in the New York City suburbs “in an area that was still quite country at the time of my childhood,” she said in a recent interview. “There was a neighbor who did some clay work in her basement — just one time I got to go up there and I thought it was wonderful.”

She majored in political science at Oberlin College and studied library science at Columbia University, then worked for a couple of years at MIT before she and her husband moved to Washington, D.C. There Robrish had her first child and concurrently began to explore her “childhood dream of working with clay.” She took “pretty much all the art classes” offered at a local community college, and earned a degree from the University of Maryland in studio art with a focus on sculpture, after which she pursued her art fulltime, teaching to support herself.

In June 2004 she came to visit a friend, Mary Chapman, in Yellow Springs.

“I was just totally enamored with the village,” she said. A month later she came back for a “reality check” and decided to move, ultimately relocating in fall 2004.

“In D.C. studio space was so expensive,” said Robrish, and Yellow Springs’ lower cost of living has meant she can generally focus on her work without necessarily teaching. Still, she has sometimes instructed here, and has taught several classes at John Bryan Community Pottery.

She recently collaborated with Project Jericho in Springfield, which hires artists to work with families who have children in foster care. It was “challenging and very rewarding work,” said Robrish. She and the participants created family totem poles by sculpting hollow clay objects and then threading them onto a metal rod with a wood base. A finished totem pole included somewhere between two and seven objects, she said.

“One boy loved to use Gameboys, so he made a Gameboy,” she said. “Some houses were made, baseballs, footballs, fish.” One couple made a “fantasy monkey in several parts,” a successful collaboration that impressed the program’s staff since the two had not been communicating well, said Robrish.

Otherwise, Robrish is focused on her studio work, she said. She sometimes exhibits pieces in Chicago and Washington, D.C., and at the Sherrie Gallery in Columbus, and also participates in the Yellow Springs Studio Tour the third weekend in October.

Most of her sculptures are figurative.

“In the last 10 to 15 years I’ve been working with the figure — before that I was doing very abstracted work that was nature-based,” she said. “Like all kids I liked to play in the stream — that earth connection — from sandbox sculpting to other sculpting.”

Robrish loves the feel of working with clay. While some sculpting processes such as stone carving are subtractive by nature, “You have the luxury in clay of working both ways. It’s both additive and subtractive, but with stone, once it’s gone it’s gone.”

Robrish also sometimes uses other materials, such as wood. One of her pieces features a piece of cedar she found in Chesapeake Bay, around which wraps an abstracted female figure.

“I think the use of wood speaks to some extent of age and decay, of the life cycle,” Robrish said. “I don’t do anything to the found wood except clean it up, or maybe blacken it for color contrast.”

The clay sculptures themselves have often been sculpted to reflect natural textures. In one wall piece, “you can interpret it either as wood or stone,” she said. “It’s very abstracted but clearly a figure.” In another figurative series, the texture of the clay pieces are “intended to suggest birch bark.”

Many of her pieces take female forms, more or less concretely. This recurring theme is not incidental.

“There’s this feeling that women are so important in transmitting culture,” Robrish said. “Women tend to be the caretakers of the children and when you educate them it makes a huge difference.”

A current work-in-progress, a naturalistic series of busts of Afghan schoolgirls, marks the cause of women who are risking their lives to pursue their right to education. Robrish drew some of her impetus for the series from New York Times columnist Nicholas Kristof’s reporting on Afghanistan, as well as Greg Mortenson and David Oliver Relin’s book Three Cups of Tea, which emphasizes the effect that access to education has for Afghan women and, by extension, their entire communities.

“That education leads to peace — if their lives are better they’re not so likely to be jihadists and suicide bombers,” said Robrish. Kristof writes that in Pakistan and Afghanistan, women have crucial authority in their societies. Since a son needs his mother’s permission to fight, says Robrish, improvement in women’s education can be “a counteraction to the radical.”

She envisions around five busts altogether, with the first one close to finished. About 15 inches high, the girl wears a bright white head scarf and sky-blue garment with long sleeves, her hands ready to hold a pen and notebook which Robrish will sculpt for her (she hopes to find someone who can help her create a text in the proper language for the notebook). The girl looks ahead with a slight smile on her lips, conveying calm hope and enthusiasm.

“What the U.S. military is now saying [about U.S. policy in Afghanistan] is we need to win their hearts and minds, and I think that’s absolutely right…You build the schools and respect their culture, have the schools teach their values,” she said. “One of the things we all think about is change and doing something to make the world a little bit better…I feel like having the art- work address the condition of women and girls speaks to needed change.”