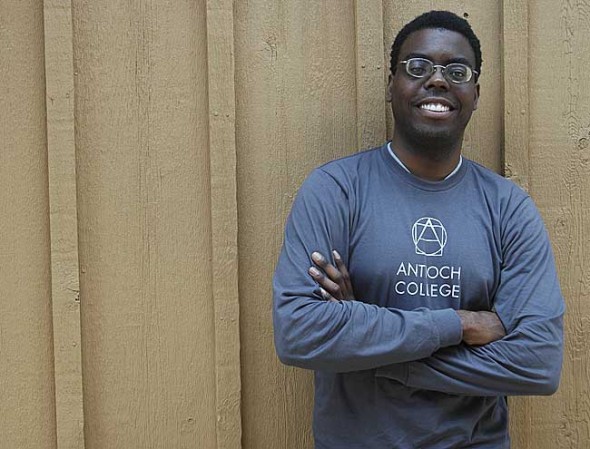 Gariot Louima is the new Director of Communications for Antioch College.

Helping to shape a new college

Gariot Louima never intended to live in Ohio. In fact, he’d never been to Ohio before coming to interview for the position of director of communications at the newly-revived Antioch College. When he told his sister, who like him had grown up in the Haitian community in Miami, Florida, about the interview, she asked him if there were any black people in the state.

He didn’t know the answer to her question, Louima said in a recent interview. But he was game to find out.

During his job interview, Antioch College leaders, along with the story of the college’s revival, won him over, and ultimately he took the job. He wants to feel a sense of mission, Louima said, and this job feels meaningful.

“As a journalist and a storyteller, I love the college story,” he said.

He was also charmed by Yellow Springs, and, when he visited for the job interview, found himself easily chatting with other patrons when he had dinner at the Trail Tavern.

“I said, I think I can do this,” Louima said of deciding to move for the job.

In May Louima began his new position, in which he oversees the college’s media relations and most college publications.

At age 31, he already has a solid dose of journalism behind him. After graduating with a bachelors in journalism and creative writing from the University of Miami, he already had interned for the Los Angeles Times. He next wrote about Haitian-American affairs for the Palm Beach Post, along the way brushing up on his Creole, which his parents had spoken at their home when he grew up, especially, he remembered, when he was being punished.

When Louima’s father died in 2002, he moved back into the family home to give his mother company, shifting his career to public relations for a local college, along with teaching a few classes. During that time he also completed a masters in management, which he followed with pursuing a masters in creative writing from Bennington College, which he recently finished. His first love is writing fiction, he said.

Like all good fiction writers, Louima writes about what he knows, and that means writing about his experience growing up in Miami’s Little Haiti. He didn’t know his family was poor at the time, he said, but he realizes it now. But his parents — his mom was a housekeeper and his dad a janitor — provided a stable and loving home, and he is close to his family.

And the family ties to Haiti, and the village north of Port-au-Prince where his parents grew up, remain strong. He feels fortunate that no family members were lost in this year’s devastating earthquake, although some lost their homes and two cousins were injured. His mother was very distressed that two weeks passed before she heard news of her sister, but his aunt turned out to be fine.

While his parents weren’t highly educated, they emphasized the value of education and had come to the United States to give their children the opportunity to become professionals, Louima said. And because he has written stories as long as he can remember, writing seemed a natural professional choice.

Doing public relations for the new Antioch College, he feels fortunate that he doesn’t have to work hard to engage the alumni — they’re already engaged. His job as he sees it is to make information available in the most accurate way that he can.

“We just have to be honest and get the story out,” he said.

There’s a shared passion among his colleagues at his new job and that passion adds to his enthusiasm.

“There’s the excitment of every day being a new day, and getting to create something new,” he said. “I feel privileged to come in at the ground level and to help shape” the new college.