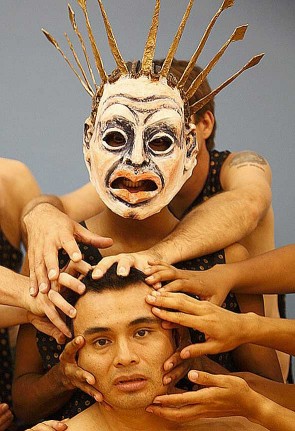 As an Antioch student in the mid-1980s, Mark Greenfield staged theater productions on the college golf course, inside the mail room, and during board of trustees’ meetings. Now Greenfield returns to Yellow Springs to teach a workshop on producing theater in non-traditional and outdoor settings and put on Oedipus Rex in the Antioch amphitheater.

Greenfield and other workshop presenters will teach how to use movement and vocal techniques, mask work, chorus involvement, group improvisation methods and stage choreography in an outdoor setting for $35 for the entire week or $7 for each individual night.

Having directed plays in public parks, abandoned buildings and boats, the New York City director is an expert in putting on shows in unexpected places.

“Part of what I have to offer is to show people how, if you have an idea and you have the people, you can find a place to make [theater] happen — and you don’t need a lot of funding to do it,” Greenfield said of the workshop, which is open to theater artists of all ages and experiences levels. “For people who have a lot of theater experience but they’ve done it in a traditional environment — it can expand their milieu in terms of where theater can happen and what it can be.”

Workshop participants will create their own 15-minute short play, which will be performed in conjunction with the staging of Oedipus Rex by Greenfield’s production company, Faux-Real Theatre, on Aug. 20, Aug. 21 and Aug. 22 at the Antioch amphitheater.

Rehearsals for the all-male production of the Sophocles classic start Aug. 13. Six parts will be cast to local actors, who will join eight New York City-based actors of the Faux-Real Theatre Company.

“We wanted to do a traditional play and apply our untraditional aesthetic,” Greenfield said of his vision for Oedipus Rex, which uses masks, ecstatic dancing and simultaneous action in an outdoor setting. The fantastical, transcendent experience Greenfield aims to create incorporates many elements of traditional Greek theater.

“We say we do it as Sophocles intended,” Greenfield said.

Greenfield came up with the idea when attending an Antioch alumni event in New York City while he was searching for an outdoor amphitheater for his Oedipus Rex production.

“It struck me that it would be nice to have something going on in the Antioch amphitheater in looking to revitalize the college,” he said.

Greenfield decided to offer the workshop as a way to give back to a college and community that helped launch his theater career.

“I wanted to do something that really involved both the town and the college,” Greenfield said. “I was very close with community members. For me, the whole Antioch experience was a Yellow Springs experience.”

He also wanted to provide local actors the opportunity to partake in the production.

“I know there is a very active, artistic community [in Yellow Springs] so I thought it would be great to include them,” he said.

“It’s an interesting collaboration for the college to sponsor something and work with such an innovative company from out-of-town as well as this great local resource in the village,” Derr said.

Nonstop’s participation in the workshop and production includes assisting with marketing and logistics as well as several of the artistic components of the show.

“We’re interested in working collaboratively with the college in areas we can lend our expertise,” said Michael Casselli, a Nonstop executive collective member and performance artist who will help Greenfield, his former Antioch classmate, with the workshop and the set design for the Oedipus Rex production.

“We can work with each other in mutually supportive ways,” Casselli said of the collaboration between Nonstop and the college. “We don’t want to be in competition with each other, so if we can assist or support relationships between us, it would be beneficial to everyone involved.”

Greenfield has decided that a portion of the production and workshop’s proceeds will go to support Nonstop and to Antioch.

“I got so much in my time at Antioch as a person and everything I’ve done afterward is because of what I learned while I was there,” Greenfield said.

To audition for the production or register for the workshop, contact Greenfield at fauxrealtheatre@aol.com or at 917-687-4998. For general information, contact Jill Becker of Nonstop at jillbecker1@gmail.com or 937-767-2646.