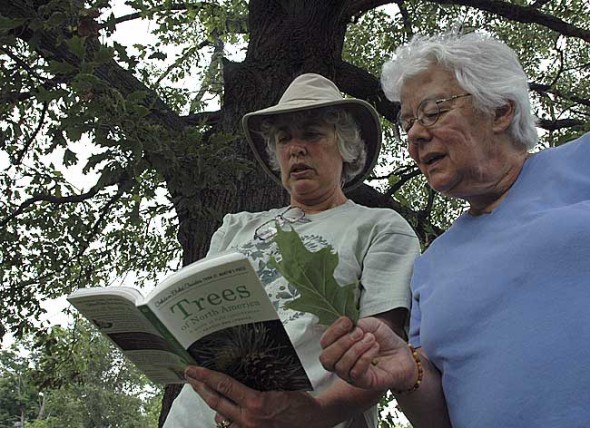 Yellow Springs Tree Committee members Macy Reynolds, left, and Kathy Beverly are part of a summer effort by the committee to identify the biggest trees in the village. Villagers are invited to submit their contenders for the town’s biggest trees by calling Beverly at 767-2586.

Big trees wanted in the village

This summer the Yellow Springs Tree Committee is scouring the community for the next state champion tree.

In updating a 1972 publication of the Antioch Environmental Studies Center, “The Big Trees of Yellow Springs,” the committee hopes to find the largest trees still standing in addition to trees which may have been overlooked.

Trees with the most height, circumference and crown for their species will be nominated to the Ohio Department of Natural Resources’ Division of Forestry, which annually publishes a list of Ohio’s biggest trees.

When the survey was taken in 1972, Yellow Springs had three state champion trees — a European larch at Allen and Livermore Streets, a Norway maple on Yellow Springs-Fairfield Road near U.S. 68 and a box elder at the west end of Herman Street, which was also a national champion.

With the new report, the committee additionally hopes to demonstrate which trees are best suited to the Yellow Springs environment and how different species look when mature.

“Large trees are usually old trees and as such have withstood the rigors of hundreds of years,” wrote Antioch College professor Robert Bieri in the 1972 report. “For fifty to three-hundred years they have withstood the coldest winters, the hottest summers, the earliest and latest frosts.”

So far Beverly and Reynolds have been discouraged to find that about half of the 64 trees on the 1972 list have since died, though they have not confirmed whether the three prior state champions are still standing.

Many of Yellow Springs’ largest trees were planted when pioneers first arrived, or are so-called virgin trees preserved by early settlers. One virgin forest site was Mills Lawn, which later became a primary tree planting location in order to replace many of the older trees which had died.

According to a 2009 report from the Tree Committee on its history, it was in the mid-1970s that then-councilman William Duncan raised money from local businesses to plant 25 trees at Mills Lawn to honor Keith Howard’s retirement as editor from the Yellow Springs News.

After several more years of planting and tending trees at Mills Lawn and what is now Duncan Park, the Tree Committee was formally organized. Over its 28-year history, the all-volunteer committee has planted about 2,000 trees, including 750 tribute trees on 26 public property locations around town, and 60 to 70 trees along the bike path, according to the history report, written by the committee’s first chairman, Lloyd Kennedy.

“The mission of the Tree Committee is to continue the beautification and livability of Yellow Springs by planting and tending and educating about trees,” Beverly said.

More recently, the committee, which operates mainly from private donations, created an arboretum on two acres of Ellis Park, where 135 trees have been planted and labeled to help homeowners plant trees suitable for their properties. In addition, the committee consults with villagers on planting and caring for trees and spearheaded a 2007 street tree study to determine their value to the community.

According to Reynolds, the benefits to Yellow Springs of trees, especially those native to the local environment, are tremendous. They sequester carbon dioxide, cut the heat island effect of paved surfaces in the summer, and provide food and shelter for native birds. Street trees specifically have been shown to increase business in communities, slow down traffic and mitigate noxious smells.

“Perhaps it is fitting that Yellow Springs should have its own list of big trees because it has a truly exceptional number of large trees,” Bieri wrote in the 1972 report. “I know of no other village of comparable size with as many giant trees.”

Villagers who have large trees in their yards  and would like them measured should contact Beverly at kathy.beverly@mac.com or 767-2586.

To view the 1972 map of the Village’s big trees, click here.