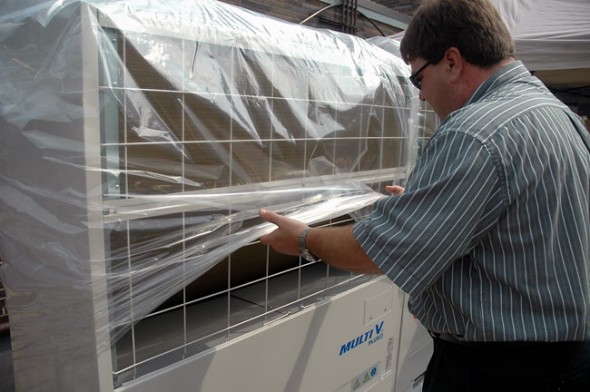 Waibel's project manager Rodney Rhoades inspects a highly-efficient new mechanical cooling unit to be installed on the roof of the McKinney school. New HVAC systems are just one component of an energy-efficiency overhaul at the schools. (Photo by Megan Bachman)

Not only will the Yellow Springs high, middle and elementary schools benefit from an energy-efficient makeover this coming school year, their students will learn how to analyze and reduce the school’s energy use from the classroom. With a $33,977 grant from the Dayton Science, Technology, Engineering and Mathematics Hub, known as STEM, coming on the heels of a $815,000 energy upgrade to the three buildings, students can enhance their energy awareness while learning mathematics skills and scientific techniques.

“It’s really learning by doing other than absorbing something through a textbook,” said school board member Benji Maruyama, who spearheaded the STEM grant proposal at the end of last year. “It’s to have kids learn conser vation in the schools, the effectiveness of behavior, turning off lights, turning down thermostats.” The STEM grant, one of 10 given to local school districts in June, will fund 11 teachers in developing energy-themed curricula, the purchased equipment and the scientists of the Mills Lawn Scientist-in-Residence program, which will lead energy experiments and demonstrations throughout the year.

Depending upon the teacher and grade level, Maruyama said students may monitor the real-time energy use of their school’s heating, ventilating and air conditioning, or HVAC, units, figure out how to conserve in their classroom, convert energy savings to carbon dioxide reduction and analyze the geometry of solar panels.

“Students could compare the energy used per month over the year,” suggested high school math teacher Dee Ann Holly, adding that classrooms could compete with one another to use less energy. “They would be buying into the system, buying into conservation.”

Teachers have access to detailed energy data, as Waibel Energy Systems, the contractor hired to design and implement the energy-efficiency upgrades, provides its clients with a detailed tracking and trending software it created to monitor whether schools are meeting their goals for reduced energy use.

Waibel estimates that the building improvements will save the district 139,833 kilowatt-hours of electricity and 477 million BTUs of natural gas per year, which translates into a cost savings of $43,430, with an additional $18,625 in maintenance savings. At the high school, which has never had air conditioning, an advanced mechanical cooling and ventilation system will comfort students while using far less energy than a typical air conditioning system. Twentyfour such units using heat pump technology are being installed in each classroom on all three floors of the building in addition to the cafeteria and library. The same units, plus an electric back-up, will be used to heat the rooms, reducing the need to use the boiler system in these areas except during extremely cold temperatures. The McKinney school’s rooftop units are being replaced by these same highlyefficient units, which, Waibel said, will create an environment more conducive to learning.

At both schools, advanced automation and HVAC controls will cut use by only operating when needed, limiting excessive demand and diagnosing problems as soon as they manifest.

The controls, all original from 1963, will be digitized and centralized, helping to maintain more consistent temperatures and improving Maintenance Super visor Craig Conrad’s ability to operate the HVAC system.

“I’ll be able to check at a glance the status of the system,” Conrad said. “It will make it easier troubleshooting equipment, and I’ll have better control of the whole thing, knowing how it’s working and that it is working.”

New lighting will brighten the buildings while curbing energy use. Every bulb in the three schools is being replaced with a more efficient fluorescent light that uses just 28 watts per lamp, down from 32 watts. Where metal halide lights were replaced with high bay fluorescents, wattage was reduced from 400 to as little as 125 per fixture. “You get the best of both worlds in that you get to see better and get to pay less,” Conrad said.

Two skylights designed by local architect Ted Donnell are being installed in the high school to provide daylight as an alternative to artificial light and to bring drafts into the building. The patent-pending design has an insulated roof and automatic windows for ventilation and will reduce the lighting demand on the third floor by 50 percent, according to Donnell.

On the southern facade of the high school, solar shades are being put up over the windows to cut down the sun’s heat during the cooling season, thus keeping mechanical cooling demand lower. New at Mills Lawn is an advanced CO2 demand-based ventilation system that will provide fresh air to the school while wasting less energy as well as providing free cooling during some parts of the year. Also at Mills Lawn, where a 1 kilowatt solar photovoltaic array has been converting the sun’s rays into usable electricity since 1998, solar thermal panels will heat water for the building, supplementing the existing natural gas hot water heaters. While these renewable energy installations visibly demonstrate a commitment to green energy, all of the new measures contribute to a lower carbon footprint for the schools.

“It’s never one big thing, it’s always a combination of smaller ones,” said Rodney Rhoades, Waibel’s existing buildings sales manager. The company’s initial analysis of the district’s energy bills revealed outdated mechanical systems, which would benefit from a more advanced design. “They were spending money in places where they didn’t need to,” Rhoades said. “Yellow Springs as a district was willing to go above and beyond.”

The district’s $815,000 investment will be paid back within 15 years, Rhoades said, at which point the energy upgrades will generate continuous positive financial returns. Beyond technical improvements, teachers and students will be taught when to open windows, to what temperatures to set their thermostats and other ways to cut back. “Education is a big part of it,” said Dan Rudolf, a scientist-in-residence and building science expert working to implement the STEM grant. “If you don’t educate the students they’ll want things the way they have had them.”

According to Maruyama, who estimates that behavior change alone can account for 20 percent energy savings, students need to become more aware of the global impact of their energy consumption. He also sees the importance of science, technology, engineering and mathematics in general. “Just as art can enhance your life, an appreciation of science and technology can enhance your life, even if you don’t do engineering,” Maruyama said.

In the last few years, the district has committed to science and math education through a math initiative organized a few years ago by several teachers and by working with the STEM hub, where two local teachers are STEM fellows. “Within the math initiative a number of teachers were doing the hands-on experiential learning,” Maruyama said. “There was already that core asset within the schools but it hadn’t been recognized at a district level.”

The STEM movement began in the 1960s when the U.S. began losing ground to other countries in science and technology. According to Maruyama, U.S. math scores remain below those of many other countries. “If you look at our economy, a lot of economic progress is predicated on technology, so if we don’t invest in that area, our economic base is going to suffer,” he said. “In Yellow Springs I think there is a movement to increase our emphasis in that area.” Broad collaboration was a strength of the district’s proposal, Maruyama said. In addition to local grant writers helping prepare the proposal in the final weeks of the last school year, participation in completing the grant is expected from the University of Dayton’s Sustainable Energy and Environment initiative, UD’s mechanical and aerospace engineering department, the Green Environmental Coalition, Net»Homes and the Village Energy Commission. “We’re ready to really tap into the local expertise in the village that’s so vast and deep in energy issues,” Maruyama said.