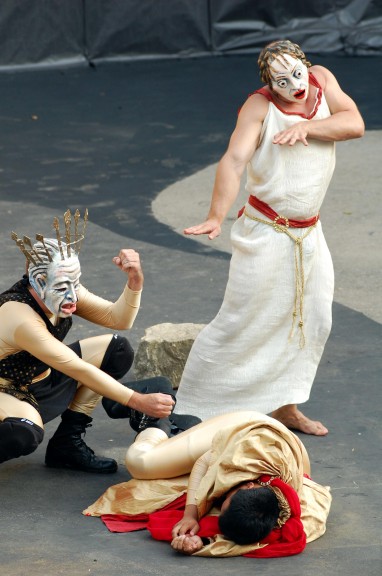 Antioch’s outdoor amphitheater is the perfect venue for Sophocles’ Oedipus Rex, presented this weekend in Yellow Springs by the New York City-based Faux Real Theater Company. The fact that a play over two thousand years old and performed in an ancient auditorium setting can still captivate audiences today is truly is a testament to the ancient Greek theater.

The play’s last performance is tonight, Aug.22, at 6 p.m. in the Antioch amphitheater.

Antioch College alum Mark Greenfield’s rendition of Sophocles’ masterpiece is an engaging study in character development, movement and visuals. The set is sparse, yet Lynda White’s emotive masks and Constance Tarbox’s costumes bring a visual shimmer to the performance.

Greenfield had only begun to work in the amphitheater setting five days before opening night. He had only rehearsed for a few weeks, and only a few days with the Yellow Springs actors. This is an impressive fact, considering the professional execution of the play. The actors are well cast and fill the space with powerful voices and movement. Most of the actors read from scripts, but as Greenfield explained, they plays were often rehearsed quickly.

Greenfield is an Antioch alumnus. He supports the Antioch revival, and in conjunction with the Nonstop Institute, hopes the play will bring some sort of life back to Antioch. It is easy to take the amphitheater space at Antioch for granted. Seeing such a perfect utilization of the theater reminds one of how lucky we are to have it.

One Response to “The Oedipus Complex”