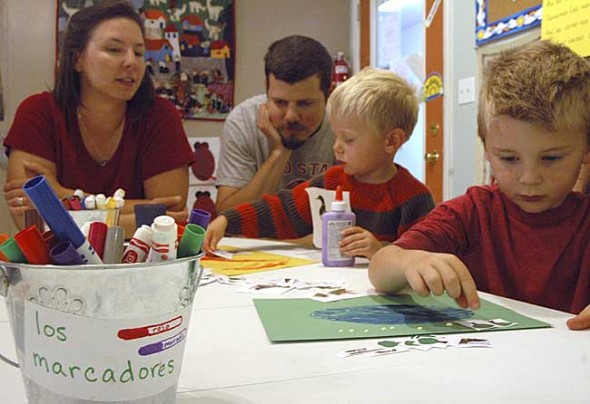 Laura Skidmore’s Primary Languages school for Spanish and French will begin a winter session in January above the Winds. Skidmore is pictured with students Quinn Creighton, right, and Brady Clark and his dad Jason. (photo by Lauren Heaton)

“Te gusta mas agua, Quinn?” the teacher asked Quinn Creighton, who sat at the table with the others, coloring. Creighton, 4, looked up at her thoughtfully, and nodded, holding out his cup for more water.

People begin their language acquisition skills from birth, and as early as eight months, the ability to pronounce a new alphabet can start to erode, according to Spanish teacher Laura Skidmore. As a linguistics specialist, Skidmore is most interested is designing her new Primary Languages school in Yellow Springs for toddlers and pre-schoolers, who, unlike adults, are still able to hear and develop the skills of native speakers.

Primary Languages opened last spring in a classroom above the Winds Cafe, next to the 360 degree studio space. Skidmore offered a Spanish class to a handful of toddlers, including her own 4-year-old daughter Gabriella. This fall she took a semester hiatus to finish her master’s degree in Hispanic linguistics at Ohio State University, and in January she will open the school again with a series of Spanish and French classes for youth as well as adults.

“Class” is such a boring and inept word to describe how Skidmore helps her “students” to get their minds and tongues around a totally novel set of vehicles of communication. The process is like a group of players creating a new world through different colored glasses. If English is transparent, then Spanish is green, and French is yellow, and the kids approach it like a game. Skidmore believes in using action and motion with language to connect meaning to the words.

“Kids learn by doing, so there’s meaning behind everything,” she said. “What matters is to have meaningful context — activities that have a reason.”

One game involves preschoolers who are “patos,” ducks, and others who are “ranas,” frogs, and they each have to waddle, swim or hop between the green “bosque,” forest, and the blue “estanque,” pond. Skidmore directs the children in Spanish, and whether they understand each word or the grammar behind it seems less important than that they hear the different combinations of sounds, understand the gist of their meaning, and have fun in an educational context.

Because Skidmore’s approach to language acquisition is quite new, there isn’t a lot of preestablished curricula or materials to draw on. Traditional models rely on techniques such as flashcards, grammar drills and bilingual music, which challenges the student to alternate between languages and use a different part of the brain than the one used to speak a language fluidly, she said.

So Skidmore designs her own curriculum, such as the outdoor Mexican market in the corner of her classroom, where students are sent to buy and sell goods to cook dinner and furnish their apartment.

“The goal is to develop language in the most natural way, through radio, television, your parents, books — to absorb it,” she said, as Spanish would be absorbed living in Mexico.”

Parents are encouraged to attend class with their children, which provides bonding time and also allows parents to create situational continuity at home with a new language, Skidmore said.

Skidmore has always been fascinated with languages, she said, beginning in elementary school, when she taped recorded episodes of “Zorro” from TV and played them back to hear some Spanish words. She went to Madrid with a Rotary exchange in high school, and then studied modern languages at Wright State before pursuing higher degrees. She initially wanted to be a professor, but found that she enjoyed teaching kids so much that she plans to pursue it full time.

Primary Languages will offer French and Spanish classes for children and adults for the winter/spring semester, beginning on Jan. 4 and continuing through May. Skidmore, her Ohio State colleague Kimberly Hoff, and one other French teacher will work together to teach the classes. For younger children ages 0–5 there is a family immersion with an adult, a more intense language immersion for ages 2.5–5, or a weekly class for ages 5–10. For adults and teens age 16 and older, there is a weekly immersion 101 or 102.

Visit http://www.primarylanguagesohio.com to find out more.