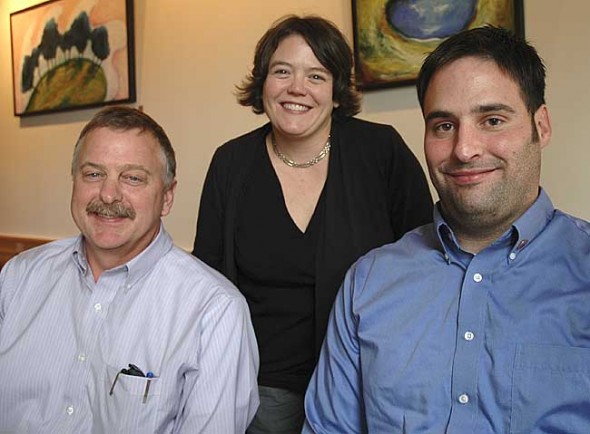 The director of the largest federal funding source for farmland preservation stopped in Yellow Springs last week to visit Ohio’s top recipient of federal funding, the Tecumseh Land Trust, which he praised as one of the nation’s top land trusts.

“They’re at the top of every category in how fast [easements] get closed and managing and monitoring the easements for properties,” said Mark Rose, director of the Farm and Ranch Land Protection Program of the U.S. Department of Agriculture’s Natural Resources Conservation Service.

In 2010, the Tecumseh Land Trust applied for and received $1.2 million from Rose’s department to purchase five farm easements in Greene and Clark counties — the most money received by any of the state’s more than 40 land trusts. Greene County was the largest recipient of these federal funds, at around $843,000.

The Village of Yellow Springs and the Miami Township provided matching funds for easements this year on the former Fogg farm just northwest of the village and the Semler farm on Snypp Road, home of the Jacoby Creek headwaters. Others preserved were the Camp Birch boy scout camp on Swimming Pool Road, a farm in Caesar’s Creek south of Xenia, and a farm in Cedarville township.

Rose was in Ohio to attend a statewide farmland preservation conference in Columbus, where this year the Tecumseh Land Trust’s executive director Krista Magaw was named an Ambassador of Ohio Agriculture by the Ohio Department of Agriculture for her nearly 10 years as director of one of the state’s most successful land trusts. She also received the honorary title, one of three ever awarded, for advising the state on farmland protection policy and championing smaller land trusts throughout Ohio.

“It was a recognition that although she serves two counties, she really helps the whole state,” said the land trust’s Associate Director Michele Burns.

In its 20 years, the Tecumseh Land Trust has preserved about 9,000 acres in Greene County and 10,000 in Clark County. When he visited the area last month, Tom Daniels, former director of Farmland Preservation for Lancaster County, Penn., said Clark County has more farmland preserved than any other county in the Midwest.

Burns said the Tecumseh Land Trust’s work will continue in both counties until the land trust preserves at least 50,000 acres in each, which, Daniels said, is sufficient to anchor agriculture in an area.