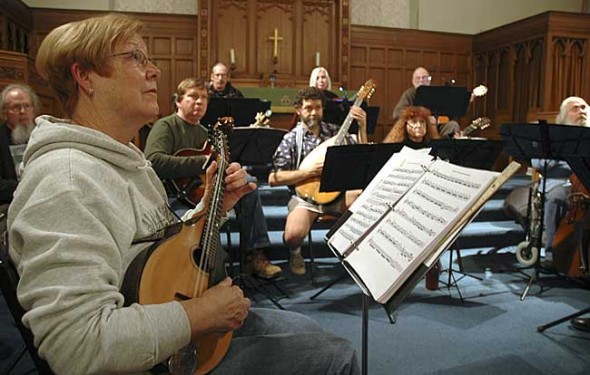 In the early 20th century, mandolin orchestras sprung up in Dayton and elsewhere, playing rags, marches, light classical and waltzes with the energetic ting of the uniquely American flatback mandolin. Today the mandolin craze is back, including in Yellow Springs, now home for the six-year-old Dayton Mandolin Orchestra.

In its first concert here since moving to Yellow Springs in August, the Dayton Mandolin Orchestra will play music from Vivaldi to Joplin on Sunday, Nov. 7, at 4 p.m. at Herndon Gallery in Antioch College’s South Hall. Joining the group will be members of the Kalamazoo Mandolin and Guitar Orchestra from Kalamazoo, Mich.

At the helm of the 18-piece Dayton Mandolin Orchestra is its new conductor James Johnston, known as Yellow Springs’ Mr. Music. Johnston, who also leads the local Community Chorus, Community Band and Chamber Orchestra and is himself a violinist, looks forward to the challenge of mandolins.

“It’s a new adventure into a slightly different sound world,” Johnston said. And while he’s more familiar with the bowing used to play a violin, the plucking and strumming used for mandolins will be a learning opportunity.

At the free concert, audiences will be treated to music from the Baroque to the ragtime tunes popular during the mandolin’s heyday to contemporary pieces written in the last few years. In honor of the visiting musicians, the Dayton Mandolin Orchestra will perform a composition by orchestra member James Kellaris called the “Kalamazoo Swag,” so named because it’s a cross between a swing and rag.

Being performed en masse (with both orchestras playing together) are three movements of “Passages through Mexico,” written by Yellow Springs native and Kalamazoo resident Victor Garcia Jr., whose mother, Evelyn Gray, still lives in town. The pieces, named after different regions in Mexico, were inspired by Garcia’s summer visits to Mexico as a child.

Accompanying the mandolins will be mandolas, mandocellos, guitars and contra basses. A singer will also join the string instruments on “Shine On Harvest Moon” and “Sleepytime Gal.”

For those who have never heard the mandolin, Johnston said to expect a vibrancy of sound.

“Think of a guitar with metal strings, higher pitches, more tinginess and energy,” he said, adding that as the conductor he’s been working with the group to “expand the tone color palette from very energized to exacting production of the pitches to more of a shadowy, fast-playing tremolo,” a rapid wrist technique specific to the mandolin.

Since joining the group in August, Johnston has also been working to unify the sound of the orchestra, which has members with varying levels of training and ability, focusing on musical interpretation, technical polish and mastering new musical styles.

“I’m a conductor who sets the bar just above the comfort level, to give the group something to work up to,” he said. The orchestra is looking for new members, even those with little experience, if they read music and have a dedication to practice.

The orchestra, founded in 2004 as a nonprofit organization, performs numerous times each year around the Dayton area, including last year at the Schuster Center as invited guests of the Dayton Philharmonic Orchestra. The orchestra has now moved from a church in Centerville to a new rehearsal space at the First Presbyterian Church in downtown Yellow Springs to be near a community of musicians and music appreciators. It recently drew more than 100 people at a concert in Yellow Springs and raised several thousand dollars from local contributors for the national conference of the Classical Mandolin Society of America that the group hosted last year in Dayton. The five local members of the Dayton Mandolin Orchestra are Kathryn and Michael Hitchcock, Matt Minde, Michael Ruddell and Yvonne Wingard.

“This community, as we all know, is a little different from other communities of its size,” Johnston said of Yellow Springs. “The ability to field all of these musicians and people who have ability is quite remarkable. People take their artistic life and musical life here seriously.”