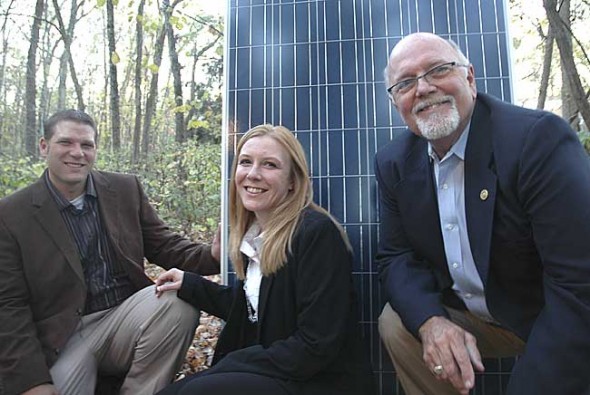 “In Yellow Springs we have a grand vision of reducing the community’s carbon footprint in addition to its life cycle costs,” Paul Wren, CEO of Yellow Springs Renewable Energy, or YSRE, told attendees at an Oct. 22 forum.

Also in attendance was Mark Shanahan, former Ohio Gov. Ted Strickland’s energy adviser, who told a crowd of renewable energy enthusiasts that it was critical for coal-reliant Ohio to move toward renewable sources of energy for electric power generation. And with the help of YSRE, the Village could soon produce solar power, and ultimately own the photovoltaic system that YSRE would install and maintain, he said.

Though Ohio’s carbon dioxide emissions are second only to Texas, recent state tax incentives, rebates and energy portfolio standards are leading to an explosion of renewable energy projects, Wren said at the forum. (The new administration of recently elected Governor John Kasich will review these programs, although Kasich has not shown support for renewable energy in the past.) Five hundred wind turbines have now been approved across the state, up from just four operating turbines four years ago, and a 500-acre solar array proposed in Zanesville will be the largest east of the Rockies, he said.

By taking advantage of these state programs in partnership with YSRE, the Village could produce its electricity from solar photovoltaics for 8.5 to 9 cents per kilowatt hour, comparable with rates the Village currently pays for electricity from its municipal power provider AMP. YSRE would finance, install and maintain the system for 10 years, after which the village could buy it.

“We would like the Village to own the array,” said YSRE chief operating officer Scott Lindstrom in an interview last month. “You’re not paying mark-up costs to develop and manage it and it could provide jobs.”

“With Yellow Springs Renewable Energy we want to provide on a larger scale to offset utility usage for entire communities, cities and villages,” Scott Lindstrom said. In addition to a potential project in Yellow Springs, YSRE is working to provide solar energy for an industrial energy user and a commercial one, both in Greene County, and last month submitted a proposal to the City of Xenia to produce solar energy for the city service center. They are also working with a retirement community in northeast Ohio.

YSRE looks forward to presenting to the Village its solar energy proposal, which would complement a 30-year contract for 810 kilowatts of solar the Village signed in September with East Coast firm Standard Energy, Inc. through AMP. Up to eight megawatts, or 40 percent of village energy use, could be supplied with solar, Wren said.

“The big deal that sets us apart from AMP… is we’re going to stay 100 percent local instead of bringing other workers from out-of-state,” Wren said, adding that for each megawatt of power generated, about four to five jobs will be created.

YSRE is exploring an ideal site for the project, which will likely be just outside of Village boundaries to take advantage of a special tax credit, the New Markets Tax Credit Program, that will keep electricity rates from solar comparable to rates from coal and other sources. Without the tax credit, solar might cost as much as 15 to 20 cents per kilowatt hour. According to YSRE, there are properties that qualify for the tax credit south of Hyde Road and near the Cemex plant on Linebaugh Road. Though the former Vernay plant site on Dayton Street was considered due to potential brownfield grants, Vernay officials told YSRE they have ongoing Ohio Environmental Protection Agency issues to resolve.

Residential, commercial and industrial energy users can also produce their own solar power through YSRE, which provides the up-front cost with financing from Milford, Ohio, energy company MeLink.

“I think any scale is great if someone is passionate to cut their carbon footprint,” Scott Lindstrom said. “Our vision is to offer as much alternative energy resources as possible.”

However, the first step for a homeowner is conservation.

“Let’s reduce energy consumption first, and through a little money save a lot of energy — it’s the smart thing to do,” Wren said. YSRE will provide a free energy audit to its clients to help them cut their energy use through lighting changes, air sealing, additional insulation and education on energy-wise behaviors.

“More and more people are aware of their carbon footprints,” Scott Lindstrom said. “[Our vision] is about making people knowledgeable about the green alternatives that are out there.”

By working with the Village government, Lindstrom said he hopes YSRE can make an even bigger impact.

“My grand picture is to see the whole village 100 percent off grid,” he said. “It could be the first example of an entire community on renewable energy — to show it can be done. It would be a national example — Yellow Springs is the perfect place.”