My nine-year-old sister Madison loves her dog like a brother. When I called her last year to tell her that I was going to have a baby, I heard her turn away from the phone and shout, “Oreo! You’re going to be an uncle!”

Likewise, my sister Hayley has always had a deep and abiding love for cats. When we were children, she constantly pursued kittens and cats alike; recently, I found a video of Christmas morning 1992, when she was 6 years old. While the rest of us are shown onscreen marvelling over our new gifts, Hayley wanders into frame nuzzling our cat, whose name I have long forgotten, asking him, “Did you get something for Christmas, kitty?” Now married, she has, for the moment, forsaken children for three cats.

Though my family had pets growing up, I haven’t since I began living on my own some 9 years ago. Being a new-ish mom, I have learned that people without kids often can’t relate to the various and sundry difficulties that come with the territory; likewise, because I have never had any pets of my own outside of my extended family’s home, I have made the mistake of underestimating the intimate bonds between pets and their stewards. For example, when my family back home had their semi-annual church directory photos taken, my sister Madison brought her dog along. I made the mistake of laughing and jokingly asking if Oreo had converted; Madison did not find this humorous, as to her, Oreo is as real a family member as I am. 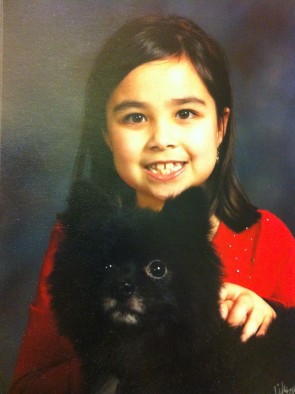 Madison and Oreo in Sunday best.

To this end, I assumed for a long time that my sisters and their individual animal loves were isolated instances, but life in Yellow Springs has taught me that love and respect for animals of all sorts is rampant in this community. Part of the prestige of the Yellow Springs News is that its “Community Forum” page, which hosts letters to the editor each week, is a veritable social barometer, recording the community’s moods, interests and concerns and preserving them for posterity. The number of letters to the editor we’ve received over my year-and-a-half here concerning the welfare of animals has been heartening; everyone familiar with the paper will remember all the letters we received concerning the proposal of a dog park in town. Likewise, I remember a small influx of letters discussing the ins and outs of not allowing pets at Street Fair. More recent letters have even argued the evils of animal mistreatment in various forms. No matter the tone or opinion, at the heart of these missives was a respect and care for the wellbeing of animals.

Having taken all of this into account, I should not have been surprised at the community’s reaction to a recent raid on a nearby no-kill shelter, which uncovered some unfortunate living conditions for the animals living there. Hearing that the Clark County Humane Society had set up a rescue fund for the animals in the shelter, our very own Yellow Springs News agreed to be a drop point for any donations community members would be willing to offer. While I was pleasantly surprised to learn of this, I was even more surprised at the number of donations we received in just a few days. Even though I have no pets of my own, these gestures of compassion toward fellow beings in need are something I can really get behind, and are just another in a long list of reasons why I love this town.

While I don’t personally know the individual responsible for the conditions at the now-defunct shelter, I would like to think that his intentions, initially, were good ones. It sounds to me as if the situation is a case of a person with a good idea, a non-profit, no-kill shelter and adoption center, taking on more than he could handle in regard to money, space, time, etc. While I’m sure many feel the impulse to publicly scorn this individual (and the internet is such a good place for anonymous criticism), I think it’s everyone’s duty to consider that a situation like this could, in a perfect world, be avoided if people in general were to acknowledge that having a pet is a responsibility that extends throughout the duration of that animal’s life. As a rule of thumb, we should not adopt a pet unless we intend to feed it, nurture it, keep it warm in the winter, walk it proudly through town, sneak it into Street Fair, let it play in the park, let it snuggle at our feet, watch it grow old, care for it in illness and grieve it when it dies. At the very least, we must be willing to have our picture taken with it for the church directory.

Anyone interested in donating to the rescue fund mentioned above may still drop items by the Yellow Springs News. Monetary donations are appreciated, as well as donations of towels, blankets, sheets, mats and toys.