When my parents were first married, they lived in what had previously been a small hair salon. There was room for their bed and a bathroom, and the small kitchen area was still equipped with a beautician’s sink, with a rut formed for a neck to rest in. Though my partner and I are far from wealthy, we have to admit that the place our new little family calls “home” is a big step up from what my parents had. 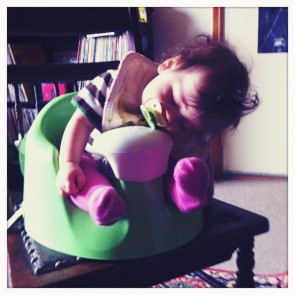 Here's a cute picture of my kid; I'm not even trying to come up with a reason for inserting this here, other than adorability.

Anthony, Lucy and I currently reside in one of the more affordably-priced groups of apartments in the village. While not necessarily graced with anything like a modern aesthetic, the apartments are well worth their price, in my opinion. When visiting my doctor prior to Lucy’s birth, he told me that he, too, had once lived in my apartment building, and that at the time, they were known as “Fat City.” I literally had to look this phrase up on the internet to understand whether this was a positive or a negative moniker, but it seems that our apartment complex was once considered, to borrow another highly outdated phrase, “the bee’s knees.”

As much as I like where we live, and as well as it serves us for now, it will probably surprise no one that I don’t want to live in an apartment forever. Don’t get me wrong: I am absolutely thrilled that somebody else has to mow the lawn and fix the heater when it breaks. Then again, as I type this, I can hear thumping bass coming up from two floors down (these are the times, by the way, when I’m totally not sorry that sometimes my baby cries at three in the morning). But the fact is that every day, our child is growing, and that means that every day our family is growing. One of these days, Fat City just won’t be big enough for us. Outside of that fact, I think it’s most people’s dream to someday own a home. I am not exempt from such dreams. For the time being, however, dreaming is about all I’ve got going for me on that score.

I love Yellow Springs. In point of fact, all of my previous writing as part of this blog have fairly gushed with praise for the village, and it’s a place where I have seen great vitality and creativity, and experienced outpourings of generosity. This town, like any town, however, has its weak points, too, and these have been the topic of much discussion over the last few weeks, whether in the street, at Council meetings or within the very pages of the Yellow Springs News.

When Village Council first proposed the building of affordable homes in the village, reactions were varied. My job at the News requires me to read everything that is submitted to the paper from community members, including all the many letters to the editor we receive each week. I have to admit that I was very surprised at some of the things we received; not necessarily in terms of content, but certainly in attitude.

There is a glorious anonymity to the internet. People of my generation have grown up with the knowledge that, on the internet, you can say almost anything without repercussions, as long as you don’t use your name. At the Yellow Springs News, we opt out of this sort of ambiguity, requiring every submission, whether web or print, to be attached to a name; I think this results in hearing from only the people who really stand behind what it is that they have to say, and for that I applaud each and every one of them. I think, however, that sometimes writing an open letter to the world sometimes means you don’t really know who it is you’re addressing; readers may know your name or even what your face looks like, but you may not recognize theirs. (If you’ve read this far in the blog, you probably know my name. If you don’t, it’s right up at the top of the page, right under my picture, so now you know what my face looks like, too.) Likewise, in some of the letters we have received recently opposing Council’s proposal and then decision to move ahead with the affordable housing units, some of the language in those letters indicates that the people writing them, who are probably all very good people, have not considered that those who cannot afford to buy homes in the village are not only people with names and faces, but also families and jobs, just like everybody else.

Those who might benefit from the planned housing have been referred to in several letters and statements as “the few,” as opposed to the rest of the village who, because they ostensibly already own homes, ought to have their plights, such as increasingly high property tax and utility cost, addressed first. Others have intimated, quite literally, that because those writing the letters don’t stand to benefit from some of the services that the Village hopes to support using levy funding, such as affordable housing, that these services ought not be funded at all. It was even expressed in one letter that if a family cannot afford a house in the village, it’s just not their time to own a house anywhere.

All of these letters made some excellent arguments. And all of them made some extremely uncharitable comments. And every single one of them were speaking directly to me. Not just to me, but also to my family, and to any other family in the village who lives as we do.

I don’t really have the chops to debate the pros and cons of reinstating the levy (though I imagine some might say I don’t really get a vote, since I don’t pay property tax), and I can’t say for sure whether or not bringing new, young families into the village is going to solve all its problems. I will say, however, that I fell in love with this town because it seemed like the kind of place that cared about community. My understanding is that community means giving the proverbial crap about everybody; not just the ones who are pulling the most weight, and not just the ones who stand to lose some where someone else stands to gain.

I know that Mr. Vonnegut has been quoted many times over the years, so it might be cliche, but I think it’s appropriate to echo his words here: “There’s only one rule that I know of, babies — God damn it, you’ve got to be kind.”

One Response to “BLOG – The Good Ol’ Golden Rule”