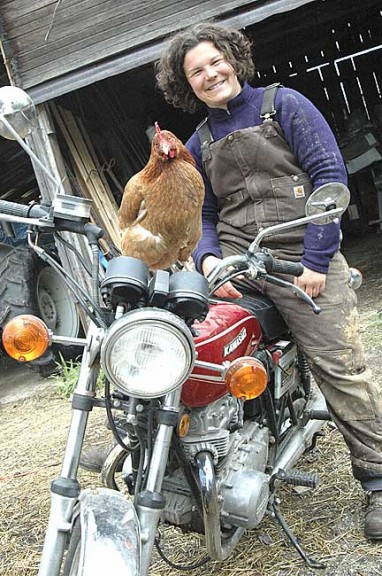 A layer hen perched on top of a motorcycle was not a strange sight at Amy Batchman’s new Radical Roots Farm on West Jackson Road, where Batchman plans to grow perennials, teach mechanics courses for women and move old barns. (Photo by Megan Bachman)

Where can you learn how to repair a tractor, help move a barn, have chicks raised for you and eventually pick your own strawberries and buy fresh-pressed apple cider vinegar and hazelnut oil, all from a 29-year-old woman? At the new Radical Roots Farm on Jackson Road, says farmer and carpenter Amy Batchman.

Batchman has a vision for something radically different on the seven-acre homestead she bought last summer — a focus on perennial agriculture, mechanics courses for women, self-sustaining farm enterprises and nearly complete self-sufficiency.

A familiar face at the King’s Yard Farmer’s Market selling raw milk shares, veggies and cottage goods from area farms, Batchman plans to expand her role in the local food economy with her new local roots 1.5 miles north on the bike path.

“The roots part [of the name] is being grounded, feeling centered and having a home and community,” Batchman said in a recent interview. “The radical part is the part that says that I think there are areas of society where radical changes are needed.”

What we eat, how we grow food and how we relate to one another are just a few of the things Batchman hopes to change — radically. And since just 17 percent of U.S. farms are operated by women and the average age of a farmer is 57, Batchman is inherently breaking the mold.

“It’s hard to buy a farm by yourself as a single person, so I’m trying to do projects where each farm project is at least able to pay for itself,” she said, hence the variety of food products and educational activities she’s planning.

And it’s not all in her head. At the farm, Batchman has already hosted a perma-

culture course attended by 60 local people, planted 27 fruit trees, dismantled two area barns whose lumber she’ll use for farm buildings and built a straw bale lean-to with the help of the Glen Helen interns. In fact, the Glenlings, as they’re known, will be spending one day a week throughout the season doing work projects with Batchman and learning to identify plants.

Having run a farm for a restaurant in Versailles in Darke County for the last few years, she knows the challenges of small-scale local food production well.

“It’s unrealistic to think that vegetable farming can pay for a farm,” she said. So she’ll focus on niche products that few local growers offer — like asparagus, mushrooms and tree nut oils and flours.

“I don’t want to plant more food than people will eat, and I don’t enjoy convincing people to eat food,” she added. So she’ll grow what her farmers market customers say they want — like greens in the winter and maple syrup.

One new farm enterprise began when Batchman noticed that she was losing money selling eggs, a situation she called “Chicky Leaks,” since she was leaking cash from her operation.

“I needed to have younger birds and buy their supplemental organic grain in larger quantities,” she said. To pay for her new batch of chickens, she is raising baby chicks for five local families and helping them build coops and learn how to care for the layers. Once raised, they will buy feed together. Batchman plans to raise a new brood annually.

Now she’ll mostly produce eggs for her own personal consumption with a goal of minimizing her trips to the grocery store and producing as much as she can on the farm. Already, Batchman heats with local wood, makes her own soap and begins every meal with “something out of a mason jar.” She sources locally about 95 percent of her meat and 80 percent of her dairy and vegetables while still being reliant on grains, which she sees as an important market to develop locally.

“One of the biggest things is to set up perennial projects to help fill that gap,” she said. She will plant hazelnut trees to make hazelnut oil and chestnuts for chestnut flour, plus strawberries and asparagus — using more fuel now to use less fuel later, she said.

And she’ll be putting in ponds, hoop houses, barns and food forests on the property, according to advice from Mark Shepard’s permaculture workshop there in April. But for the next five years while the perennial production ramps up, Batchman wll be focusing on annual vegetables, carpentry and education.

Having had to learn how to use tools and repair machinery as a farmer, Batchman now wants to pass on her skills, especially to women who may have never had the opportunity to learn.

“If you’re going to be using machines, we should be empowered to fix them,” Batchman said. She plans to teach simple mechanics using a tractor mower.

Learning physical skills was a radical change in Batchman’s life. While a pre-med student at the University of Dayton she struggled with an eating disorder until she discovered a new-found sense of worth.

“By working outside and using my body, building things and using tools, my self-esteem stopped coming from what I looked like and started to be from what I could build and do,” she said. Now Batchman hopes to help others do the same.

“I think that schools should teach a lot of facts but it’s also good to know how to bake bread, preserve food and build a book case,” she said. “It took us several thousand years to get to this point and in one or two generations the knowledge was lost,” she said of basic skills.

Batchman also learned how to move barns by dismantling and reassembling them, preserving and recycling the old lumber. That endeavor, called Barn Again Lumber, along with her straw bale building, helps support her farm activities. Batchman’s job as the assistant editor of a sociology journal called “Violence Against Women” also helps pay the bills while she pursues radical change on the farm.

Because banks wouldn’t loan Batchman the money to purchase the farm, which has a farmhouse built in 1871, she found someone who would. It was Doug Siebert and Leslie Garcia of Peach Mountain Organics in Spring Valley who put up the funds. To Batchman the arrangement is just right.

For more information, call Batchman at 937-470-9153 or email her at radrootsfarm@gmail.com.