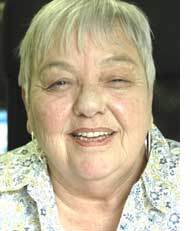 One of Antioch College’s biggest champions, and one who has helped deliver the institution from destitution, is leaving Antioch for a quieter, less driven life. Risa Grimes, director of principal giving at the college, will retire at the end of the month.

Grimes came to Antioch in 2005 as a major gift officer with the idea that she would retire from that job after a few years. She had no idea what was in store for her when just two years later Antioch University announced that the college was in financial exigency. That’s when then-President Steve Lawry asked her to step up as director of advancement to take on the challenge of saving the college from drowning.

“I really didn’t want to, but President Lawry took me aside and said, ‘You’ve got to, Risa, no one else will do it,’ she said, chuckling. “So I said I’d do it — for a little while.”

Things only got worse, when during the 2007–08 school year the college gradually laid off its faculty and staff and at the end of the year closed the college completely. But instead of joining the exodus, Grimes, who describes herself as “tough, bold and sassy,” put her nose to the grindstone and began a new hunt for cash. Her selling points were different now, as the focus was to gain independence for the college and then rebuild it as an educational institution. Working for the Nonstop Liberal Arts Institute funded by the college alumni, she got on the road with Lee Morgan, Eric Miller and Wendy Ernst to tell as many alumni and Antioch supporters as possible that the Antioch community was on a mission to revive the college.

“I’m a big believer in numbers. The more people you see and the more people you get to hear the story first hand, the more likely you are to get a gift,” she said in an interview last week. “I did what I know how to do. And it worked.”

Altogether, Grimes and the team of fundraisers, including homebase facilitator Amy Maruyama and others, raised $23 million for the college over three years. And though she could have cared less at the time who was raising what as long as the money was coming in, she said, the records show that of the total, Grimes brought in about $13 million.

“Risa led a team that, together, accomplished something extraordinary for Antioch College,” Antioch College President Mark Roosevelt wrote in a press release last week. “Her work was instrumental in the establishment of an independent Antioch. We owe her a debt of gratitude.”

The description of Grimes’ job changed as the college went through its metamorphasis from an independent school with no students or faculty, to an institution with a president, a new curriculum, a core community of educators and learners, and $1.1 million in cash and pledges to sustain it until the next wave of donations come through, according to numbers from College Communications Director Gariot Louima. Last year, under interim President Matthew Derr, Grimes carved out her role as director of principal gifts, a high-touch job that requires cultivating personal relationships with supporters who have the capacity to give over $1 million to the college. The challenge was never figuring out how to sell Antioch College, she said last week, but rather helping donors to remember the importance of the education they received there and to realize that they now have the opportunity to use their resources to do the most good for positive change by supporting Antioch College.

“This product is an easy sell,” she said. “My job was to help donors to fulfill their philanthropic needs.”

Grimes helped the college get to about 21.5 percent participation among alumni donors, who she believes truly sustained the operation and allowed the college to pay its staff each month and continue to do the work of rebuilding.

But working 70-hour weeks, alternating one week on the road and one week home for 11 out of 12 months is almost enough to break a person who at 62 is looking for ways to slow down and have more free time for grandchildren, Grimes said.

“Antioch’s still fragile…there will be a point at Antioch where that will change, but it will take four or five years of continuing to keep alumni informed and up to date until you’ll start to see more money coming in,” she said. “There’s no jazz to this piece of it — but I have every confidence that it’s going to succeed.”