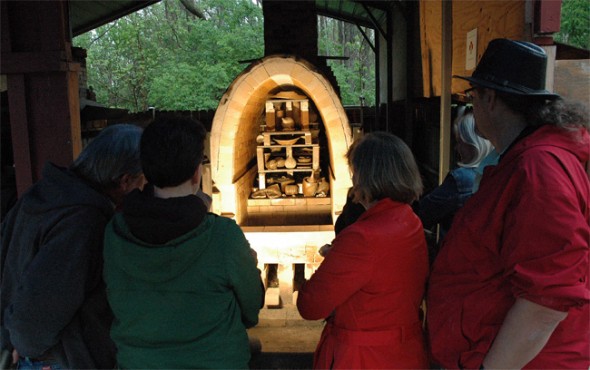 Potters and spectators ooh and ahh at the kiln opening. (Photo by Megan Bachman)

After days of stoking the fires, the new wood-fired “manabigama,” or beautiful-teaching kiln at John Bryan Community Pottery was opened to reveal its pottery treasures within.

The fire was started at 4 a.m. on Sunday, April 24, and reached the critical temperature of 2,200 degrees Fahrenheit at 10 p.m. that night. According to studio tech Geno Luketic, at that temperature the silica in the wood ash melts and coats the ceramic pieces.

“One major benefit of wood is that the aesthetic is unique when you don’t have to glaze and the wood ash flies up,” said Luketic. “We really want to make it that kind of thing where potters can experiment with firing.”

Last Saturday at the ceremonial lighting, Rick Godwin was honored for donating the bricks that eventually became the kiln.