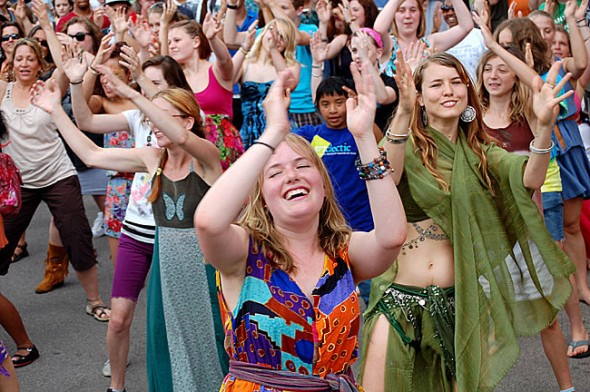 The flash mob dance that took place during Street Fair is a recent example of creative and spontaneous fun in the village.

Fun is afoot in Yellow Springs!

Villagers are encouraged to take part in some extra fun on Tuesday, in order to help Yellow Springs earn the title of “Most Fun Town” in the country.

“Come out, have fun, show how much fun Yellow Springs is on an average day,” said Lisa Goldberg of the Chamber of Commerce on Monday. “This is a great opportunity for Yellow Springs. It’s a big deal.”

All day Tuesday and Wednesday morning Traveling Jules and Traveling Joan, the mother/daughter team that is judging the six finalists in the “Most Fun Town” category of a Rand McNally/USA Today  “Best of the Road” competition, will be in Yellow Springs. For the occasion the Chamber, in collaboration with local artists and other villagers, is putting together events that are most often found downtown on Saturday or Sunday.

“We’re trying to make Tuesday a weekend day so they can see what it’s like to be here on the weekend,” Goldberg said.

Events begin at 9:30 a.m. on Tuesday with felt-flower making at Brother Bear’s led by Jafa Girls Nancy Mellon and Corrine Bayraktaroglu, after which the flowers will be distributed around town. A press conference will take place at 10 at the Chamber train station office, during which Mayor Dave Foubert will make a proclamation. Local musicians will busk on the streets throughout the day.

On Tuesday the Jafa Girls will lead the traveling team on a tour of Yellow Springs public art, and the team will also have free time, during which they can buzz around town in the Ice Cream Mobile golf cart donated for the day by Corner Cone owner Bob Swaney.

Organized events will continue at 5 p.m. with more busking at the Art Park at Corry and Dayton Streets. The local band Wheels will perform at 7, and the Egyptian Breeze dance troupe will perform around 8, followed by The Undercovered from 8:30 to 9:30. The evening will conclude with a performance by the Soul Fire dance troupe.

On Wednesday, the judging team will take a tour of the Glen, and if they choose may take other tours of local farms, artist studios or Young’s Jersey Dairy. Their time in the village will conclude with a late lunch at Young’s, according to Goldberg.

The mother/daughter team is coming to Yellow Springs after spending Saturday and Sunday in Myrtle Beach, S.C., which is another of the six towns in the “Most Fun Town” category. The team, which began in New York City last Friday, will continue to Santa Claus, Ind., then Glenwood Springs, Colo., Park City, Utah and Vacaville, Calif. They have to conclude their cross-country trip by mid-July.

The “Best of the Road” competition began with 600 nominees for the categories of Most Fun, Most Beautiful, Most Patriotic, Friendliest, and Best for Food. Groups of two competed to be selected as the judges, and are eligible for a $10,000 prize.

Chamber Director Karen Wintrow nominated Yellow Springs for the competition, and the number of favorable comments about Yellow Springs on the Best of the Road Web site vaulted the village into being one of the 30 finalists. The results will be announced at the end of July.

For more up-to-date information, check this Web site or the Chamber of Commerce Facebook page (go to Facebook, type in Yellow Springs, OH).  To keep tabs on the trip of Traveling Jules and Traveling Joan, check their Facebook page, http://www.facebook.com/YellowSpringsOH#!/travelingjules.