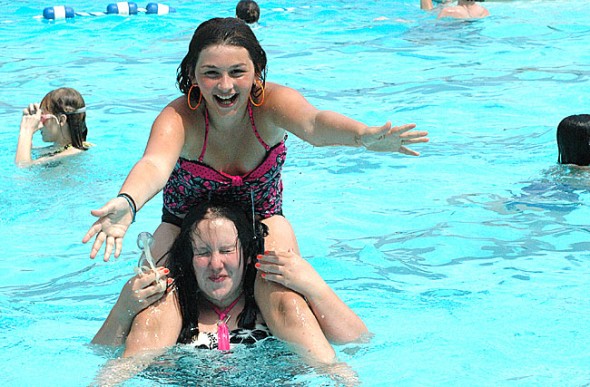 Water you waiting for? Many villagers beat the high temps and humidity of last week’s heat wave with a trip to the Gaunt Park pool. Shown above, Lorien Chavez was given a boost by Danny Horton on a hot summer day. According to pool manager Tina Fox, last Friday was the highest pool attendance of the summer as temperatures hit the high 90s. Life guards took frozen washcloths and plastic bottles of chilled water to their high seats to keep cool. (photo by Megan Bachman)

How we’re weathering the weather

The upside of last week’s heat wave was that villagers had an ever-ready conversational topic, and the phrase “Hot enough for ya?” took on new meaning.

But the downside, of course, was the heat. Beginning Monday, July 18, and ending Sunday, July 24, daily temperatures averaged 10 degrees above normal, according to meteorologist Myron Padgett of the Wilmington office of NOAA, the National Oceanic and Atmospheric Administration.

Add high humidity, and the heat index — what a person who is outdoors actually feels, according to NOAA — was over 100 for seven days in a row.

But aside from the discomfort, the village came through the week fairly well, according to Miami Township Fire Chief Colin Altman on Monday.

“We didn’t have nearly as many problems as some other communities,” Altman said. “People were pretty smart. They stayed inside or limited their activity.”

Well, not everyone. According to Altman, the squad had about five calls over the week from people suffering from heat exhaustion, with symptoms of dizziness, nausea or general discomfort that required a trip to the hospital for IV fluids. Most of those who needed help “were doing things that people shouldn’t do in 98-degree weather,” Altman said, including mowing the lawn and jogging.

Police Dispatcher Larry Campbell had no record of receiving any heat-related calls during the week, although he had been proactive in contacting some local elders to make sure they were all right.

Amy Crawford of the Home Assistance Program, who works with local elders who live at home, saw many examples of community caring. Three different individuals called in during the week to donate window air conditioners to elders in need, she said, and the Odd Fellows, who perform odd jobs for the elderly, helped to install two of the appliances in homes. She’s still looking for a recipient for the third air conditioner, Crawford said.

The agency can also connect those with low incomes to programs that will help pay high summer electric bills, such as the state-funded Summer Cooling Program through Community Action Partnership in Xenia.

In general, the agency encourages seniors to call them if they have needs, Crawford said.

“If people have any problems, they should call, and we’ll brainstorm with them,” she said. “We’ll get them an air conditioner or help with their bills.”

The Village government was also prepared for the heat, and at the July 18 Council meeting Manager Mark Cundiff announced that the Bryan Community Center, Senior Center and the library would be open during regular hours for anyone who needed a cooling center.

Some villagers did indeed use the Bryan Center to cool off, according to Dispatcher Susie Butler this week. Some adults came to sit in the lobby, and lots of kids took advantage of the game room, along with families with small children who came when the Community Children’s Center’s air conditioning went out for a while.

The Bryan Center’s regular hours are 7 a.m. to 9 p.m. and villagers are always welcome to come there during heat or other emergencies.

“Anytime there’s a power outage or it’s hot, this is a cool place to come,” Butler said.

An increase in local library attendance over the hottest of days indicated that some chose to cool off among the stacks, according to Head Librarian Connie Collett.

At least one villager took advantage of the Springs Motel for a night to escape the heat, and several came during a power outage on Monday of that week. It’s not unusual for villagers to check into the motel during emergencies, according to owner Eric Clark.

Creative thinking on the part of the Gaunt Park pool manager helped those with some of the hottest jobs in town — pool lifeguards — to get through the day safely.

According to Tina Fox, memories of putting cool washcloths on her children when they had fevers helped her devise a strategy to help her young lifeguards keep cool. She sent her husband, Village Electric and Water Department Head Kelley Fox, out to Dollar General to buy all the washcloths, baggies and plastic bottles he could find, then she put the washcloths in the baggies and froze them, along with plastic bottles of water for the guards to use in their chairs.

Also, each guard was allowed to stay out by the pool only 20 minutes at a time and had to get into the pool for five minutes each hour, Fox said.

In general, activity downtown seemed to slow down during the week as many simply stayed home in the air conditioning, according to several merchants. Food sales were off a bit at Tom’s Market, according to owner Tom Gray, who said those who shopped tended to do so in the morning and evening.

While Patrick Harney of Brother Bear’s also noticed that the amount of foot traffic slowed down during the heat wave, those who came to the air-conditioned coffee shop tended to stay longer than usual.

“More people were hanging out for longer periods,” he said. “People were coming in with their laptops.”

And while it was definitely hot outside, his customers still wanted their coffee, Harney said.

The best news about last week’s long heat wave is that it probably won’t happen again this summer, according to Padgett of NOAA. The unusually broad and sustained heat — affecting about 140 million Americans across the south, midwest and eastern part of the country — was caused by a high pressure system that stalled over the middle of the country, and winds from the southwest that blew the heat toward the east and north. While days in the 90s are not uncommon in August and will likely occur, Padget said there’s no indication that a heat wave of such sustained length will come again this year.